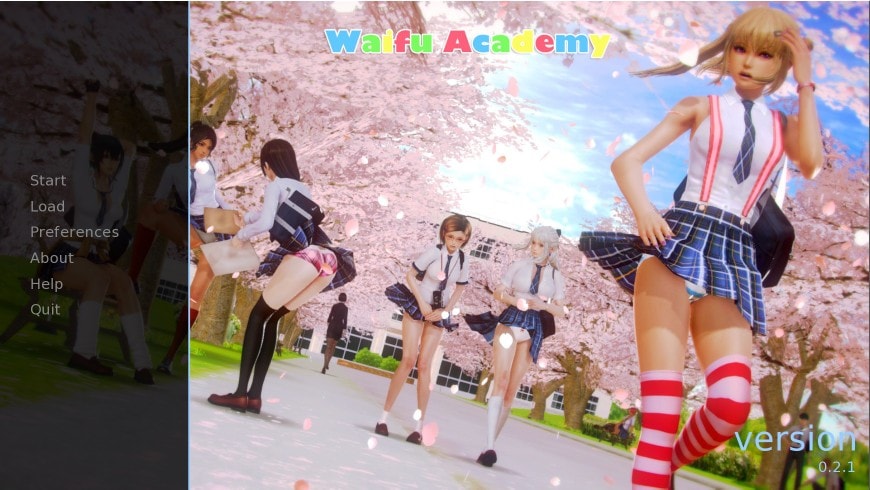 In Waifu Academy, you play as young man (with a name of your choice, of course), who wishes to seek revenge after many years of harrowing ordeals… The game features more than 30 characters, each of which is unique and has a (hopefully) believable background.
Most of the game scenes take place at a fictional private high school called, ‘Sazaki Academy.’​

MOD FEATURES
In-game Walkthrough:
This mod adds an in-game walkthrough to the game Waifu Academy! If there is a choice that leads to a scene that could be missed it will be highlighted green so you don’t miss any scenes. Any choices that lead to game over scenes will also have a note next to them to let you know that they lead to a game over. I’ve also removed all of the superficial karma popups, which makes the game experience much better.

Option to start at new content:
When you start a new game you have the option to either start at the beginning of the game or skip to the start of the new update in case you’ve lost your save and don’t want to replay the earlier parts of the game.

Improved Scene Gallery:
The mod also improves the scene replay gallery by adding around 35 scenes that are missing from the official gallery, and all of the gallery scenes are now already unlocked by default.

Improved UI:
Improves the game’s UI by replacing the textbox with one that is smaller and more transparent, makes the text more readable, and adds an option to disable the quick menu and phone button so they don’t block the screen.

Free Roam / Open World:
Ever wanted to just chill and explore the world of Waifu Academy? The final feature that the mod adds is a standalone free roam mode with a day/night and event system with 27 locations and 46 events. The free roam mode is separate from the main story and can be started from the main menu.

We disable comments to the public due to high volume of traffic and spam comments, Commenting is only available for VIP members.
5 5 votes
Total Game Rating
Subscribe
Please login to comment
23 Comments
Newest
Oldest Most Voted
Inline Feedbacks
View all comments

Is the mod updated?

The mod still not update yet.?

I am a member, I need to unlock the gallery, so I will like your game more, like this website and developer’s game, thank you, please

mod is now available, however the gallery is not been fixed. might release in next update

When can there be cheating

still no update for now

Why i can’t save while i want to quit from the game?

make sure you enable the storage permission in app info

still no update for now