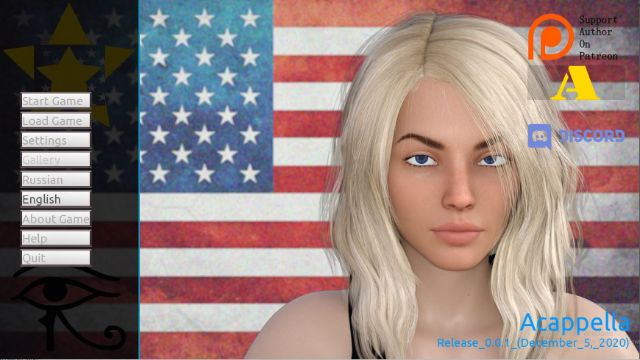 Once a strange event happens to a world famous racer that radically changes his fate. Seduce girls, look for new acquaintances, come to success in an unstable and rapidly changing world.​

v.0.0.2
— the storyline is continued;
— сontent has increased by 20% compared to the 0.0.1 version;
— despite the fact that there was more content, the game began to weigh less, due to the fact that unused copies of some files were deleted (some of them weighed a lot), for example, copies of video sequences were deleted. These files appeared in the release version by mistake, and all files used in 0.0.1 remained in the game;
— several sentences that were not translated into English in 0.0.1 have been translated;
— replaced pictures in the main menu;
— when starting the game, a page with thanks to patrons is now displayed;
— incorrect file names have been changed;
— a few more minor changes;

v.0.0.3
— The story continues, many new scenes; Added the plot of the second day;
— Added new erotic scenes;
— As the game grows in size, different levels have been added. you can now choose whether you want to go through the prologue, or jump straight to the Day 1 story or Day 2 story;
— The map that appeared at the end of earlier versions is now deactivated. At the moment I am planning to make a game in the VN genre, but not a sandbox. The phone and all its available functions are saved;
— The thank you sheet has been updated;
— New music and sounds have been added to the story for Day 2;
— Сanceled confirmations when exiting the main menu screen, and a few more fixes;

This Is Not Heaven [Final Update 2]