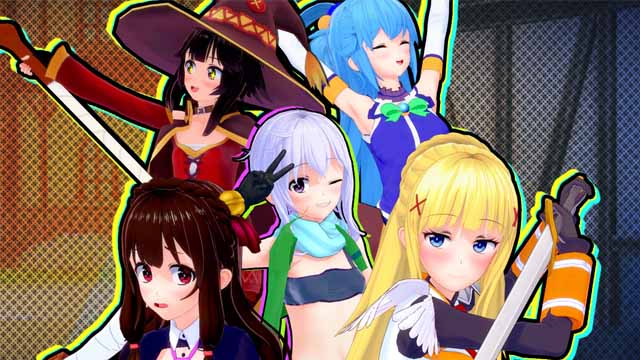 Adventurer Trainer is a free non-commercial fan-made porn-parody Dating Sim/Visual Novel with RPG elements, set in a fictional universe loosely based on Konosuba and other titles. You will meet familiar characters, embark on exhilarating adventures, solve mysteries and more!​

Technical:
– It may rain on some days, precluding you from doing some of the outdoor activities.
– Some activities will now increase your stats! For example, spending a day doing construction work will increase your Health.
– You can now work at Guild, which will produce money, make you acquainted with new characters and potentially progress some quests.
– Reputation aspects now have icons. Dialogue options leading to an increase in one of the aspects will now be marked with an icon
– The numbers of seen and total events can now be found in the Event Tracker & Girls menus
– Added feats that you can learn from other people! They will affect gameplay in certain ways; for instance, lockpicking feat will allow you to pick locks while adventuring
– Added books that you can read, which may increase your stats, teach you abilities or feats

Adventuring:
– Made MASSIVE performance optimizations. You should see drastic increase in FPS and a complete lack of stutter.
– Added a new type of Curio: locked chests! Once you learn the lockpicking feat from Chris, you’ll be able to open them
– Some adventuring scenes will now have foregrounds
– Mimic received a new look
– Updated some visual effects
– Some visual effects will now display at higher FPS (thanks, performance optimizations)
– Added a way to tell that a damage/heal value was boosted. Will consider additional changes to telegraph this effect to the player.
– Added Ambushes. Sometimes, the game won’t tell you you’re heading into a fight, and the enemies will get the first turn… Stay on the lookout!
– Added a type of Summoning abilities for monsters

Balancing:
– Reduced Skeleton’s shields from 2 -> 1. This should act as a good enough nerf for the Dungeon for the time being while I’m reworking some combat aspects.

Minor changes:
– Training with Darkness will now slowly increase her Accuracy up to +60.
– Added medals to Hall of Fame to further recognize my Patrons! The longer you’ve supported the game, the higher rank you’ll have. Supporters on annual plans will receive golden medals immediately
– New font for floating messages in adventuring
– Added a new overlay for when the player is skipping text
– Added an option to enable touchscreen controls on desktop platforms.
– Unique item drops are now also bound by requirements instead of pure random chance. For example, some items will require you see an event first before they can drop.
– Cheat menu will now display an invalid syntax error instead of erroring out in case of invalid input
– Touched up Wiz’s shop visuals

v0.1.3
The main focus of this update is polishing and expanding the existing gameplay systems.
The story centers on developing the relationships with Megumin and Chris, as well as setting up the foundation for future events with Yunyun and Rin.

Technical:
– Completely redesigned the main menu and the game menu
– Items now have rarity levels which will be correctly displayed in the inventory screen
– Usable quest items will now be marked appropriately in the inventory
– Numerous screens are now animated and more responsive to user actions
– Made changes to the quick menu, hopefully making it more noticeable and removing redundant options
– Added an XP bar to the inventory. You can now track how close you are to hitting the next level!
– Added gifts that you can use to raise your affection levels. You can find them or buy them off of Wiz.
– Added Effects and Animations options to Preferences menu that the player can turn off in case the game isn’t running well on their device.
– Added a Reputation system; choices that you make may now change it, affecting the way the other characters will see you.
– Added a What’s New screen to showcase new features after an update.

Adventuring:
– Replaced recurrent quests with Quest Director system, which will generate a random layout for each adventure you embark on. You can now choose which room to proceed to, allowing you to choose to avoid encounters or seek them out.
– You will now receive a popup message explaining why you can’t use a skill, for example when you’re out of mana or there are no valid targets
– Monster names will now be shown in target selection screen and during enemy turns
– With every hit, the monsters will flinch ever so slightly to emphasize impact
– Added animated backgrounds. Now the fog in the dungeon will move as it’s supposed to
– The chance to hit is now displayed when selecting a target
– Added a new type of miniboss: Skeleton King! You can find these formidable opponents in the tomb, but watch out: they excel at commanding their undead troops.
– Added a new type of enemy: Foxes! They’re cute. That’s about it
– Added collectibles. Keep an eye out for it!
– Added a new type of curio: fishing spots!
– Added a new type of curio: buffing and healing stations!
– Added a new animated popup to display item drops
– Clearing combat encounters can now provide loot
– Adventure buttons will now indicate the contents of the next room
– Added new reactions from party members to different events

Balancing:
– Direwolf miniboss can now use an AOE ability to increase dodge of the enemy party.
– Added Mana Potions, which can be found or bought at Wiz’s store.
– Kazuma’s Snipe now deals 30% more damage.
– Aqua’s Turn Undead is now an AOE skill. It will also display an additional visual effect.
– Skeleton’s HP reduced to 85.
– Aqua’s Heal now heals for 20% of a unit’s max HP, plus 20% per each boost point spent.
– Aqua’s Heal can now overheal units. However, it can’t target units with full HP.
– Reduced Aqua’s base strength by 2.
– Healing Potions can no longer target healthy units.
– Killing monsters now grants experience.
– Increased the amount of Gold that can be stolen from the Mimic to 350.
– Chunchunmaru.

Minor changes:
– Minor adjustments to Aqua’s, Megumin’s, Yunyun’s, Luna’s and Rin’s models and visuals.
– Megumin’s Explosion will now shake the screen and create an additional Explosion visual effect. A really really cool one. Thanks Leon.
– Updated Megumin’s Explosion visuals and sound effects.
– Mimic’s attack sound is now the chest open&close sound from Minecraft. Thanks Fjalar.
– Updated the visual effects for all normal attacks.
– Added a new visual effect for Boost level 2.
– Set the default character-per-second to 135.
– Added a tutorial arrow which will point to some things on the screen during tutorials
– Added a popup screen for when the player levels up.
– Added a Return button to adventure, allowing the player to return to the city outside of combat.
– Clicking on Construction will now prompt for confirmation instead of going straight into it.
– Compressed some less-used assets to save some space.
– “Polar Opposites” will now take prevalence over Succubi Cafe event when exploring the alleys.
– “Hecking Paperwork” will now require you complete “Gather Healroot” quest first.
– “A Business Arrangement” will now require a Salmon in your inventory
– “Long Live Sexual Assault” will now grant Bear Trap item, and if you decide to steal from Chris, a Panties item.
– “Extracurricular” will now require you see “Parenting”
– The bonus event in which you repay the debt you owe to the city will no longer show up in the tracker until you trigger it.
– When displaying the list of requirements for an event in event tracker, completed requirements will be marked with a checkmark.

v0.1.2a
– Fix for Lolisa’s initial event not having the correct set of requirements and not triggering when expected
– Reworked “A Piggyback Ride for this Brat” event
– Graphic changes in “Polar Opposites” and “Hopeless” events
– Multiple changes to wording in early-game events.

v0.1.2
This update focuses on events for Darkness, fleshing out the story and the characters.

Technical:
– Fixed an issue where versions were not correctly compared when checking for updates in cases where the client’s version was higher than the one available online.
– Fixed a bug which could result in a game crash on Linux systems if a dependency was not resolved.
– Enabled version checking for Patreon builds.
– Added a marker to identify activities that will lead to events.
– Removed duplicate links in Event Tracker GUI
– Formatted gold counter in abbreviated notation when the number is high enough
– Added a patch to fix corrupted item IDs on load
– Added gestures to Android version
– Added more cheats.

Minor changes and balancing:
– Enemies with no shields will take extra damage from attacks of a damage type they’re vulnerable to.
– Enemies will receive 5% more damage when shielded from regular attacks.
– Changed some visuals to fix some wonkiness.
– Healing potions will now restore 30% HP.

v0.1.1
This update focuses on events for Aqua & Megumin.

Technical:
– Full Android support! During adventuring, mobile players will take advantage of on-screen controls to play. Please report any bugs/errors/issues regarding this.
– Hall of Fame added to the menu, crediting the generous Patrons who support the project!
– Added an Event Tracker, complete with a Replay system and categories!
– Added a fully functional inventory system, accessible from both in and out of combat. Stock up on those heals!
– Added the first iteration of the shopping system (which might see changes in the future to accomodate more features).
– Added an update checker! The game will show a notification in the main menu when a new version is available.
– Added a patching system for seamless upgrades between versions. No more unsupported save files!
– H-scenes will now display text differently to maximize what you can see on the screen.
– Added a cheat menu.
– Various spelling mistakes fixed and some sentences reworded.

Adventuring:
– Fixed a bug which could result in an uncaught exception when Megumin uses her Explosion
– Added dynamic environment effects.
– Added animations to some monster attacks.
– Added bait animations.
– Added Steal ability. Talk to Chris to learn it!
– You can now use items during combat
– You can now find items in chests
– Fixed a bug that could result in accuracy/damage/crit bonuses not propagate properly when abilities were used
– Revamped the visuals of the Plains environment. Pixel art rules
– The visual environments are now procedurally generated, resulting in a much higher number of variations than I could make by hand.
– Revamped quest backend system to streamline updating experience to new versions. Fully backwards compatible, no need to start a new game.

Minor changes and balancing:
– Decreased Darkness’ base dodge attribute to -100 to stay in line with her character. No dodging allowed.
– Rebalanced attribute growth to have beefier, stronger characters at higher levels.
– Increased monetary reward for exploring city alleys, and added a possibility for a random Unique Item drop.
– Added new sound effects to various parts of the game. Sex sounds too!
– Fixed instances where Aqua had incorrect shoes on.
– Updated and changed some sounds.
– Added the link to discord in main menu.
– The events are now mapped by IDs vs names.

v0.1a Hotfix
– Fixes a bug that could lead to an uncaught exception during adventuring
– Added 1 H-scene