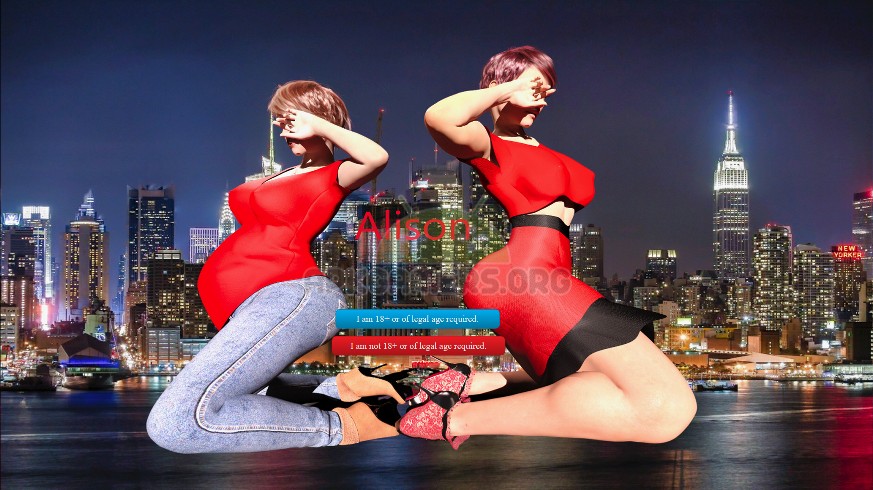 Alison Fall of the Apple v1.0

Alison Fall of the Apple APK Android Port – In Alison Fall of the Apple you play a highly trained military veteran who has been working as a cop in NYC since the disappearance of his pregnant girlfriend 5 years ago. After saving the life of a young woman named Alison your life is thrown into chaos with thugs, hitmen and the corrupt elite of the Big Apple trying to hunt you both down. With lives on the line choices will matter and decisions will have major consequences, for you and for those around you.
Alison FotA is essentially 3 games in 1 where you will find major differences in both story and characters depending on whether you choose the Love, Dom or Harem route with no render repeated on another path.Thank you for your interest in my game. In Alison you will play as Michael.
A highly trained X military veteran, currently working as a police officer in NYC.
Michael rescues a young girl/woman named Alison from a terrible fate in his daily routine as a police officer. From that moment Michael’s entire life is thrown in to chaos. It will be up to you to decide how you intend to progress the story. The story will branch out in to three roads at a specific time and place. The choices are as follows. Professional, Gentle, Cold.
They all lead to the same ending, the story is linear. However each one of them leads there in different ways. For example. Professional, is your vanilla option where you care enough to help her and solve her problems, while at the same time living your own life with her as a roommate.
Gentle is your love story, and “Cold” is the corruption path, dominance/submission.
Each path will be updated as much as possible, until enough patrons jump on board and decide to vote on a monthly poll for their favorite route to be developed each month. There will be polls where you get to choose which path should i focus on for that month.
​

v0.3.1
Fixed name mix up (character names from 0.3 were mixed up).
Fixed a lot of grammatical and spelling errors.
Updated game build to 0.3.1 bringing with it 98 new renders as well as the continuation of the story with “Love Path”.

v0.3 Directors cut
This was initially intended for patrons only version. In short no long black screens. At least nowhere near as many or as long. This also includes extra images and fixes to text, as well as improvements to the sex scene with additional text and less black screens.

v0.3.2
Progression of love path, as well as the introduction to Harem mode.

v0.3.5
Fixed image mismatch from previous update (0.3.2)
Fixed and added the easter egg animation (Alison walking from harem path.) into the current update.
Progressed the story on both love and Harem path with 0.3.5 update.
Added the first iteration of Dom path with this update.
Introduced stats to the game with Alison in love path, as well as Alison in Dom path.
Both make for fun gameplay that relies on required stats to trigger scenes.
More to come with the next update.

v0.4
Story progression on both Harem and Love path.
Added 3 new (sex) animations to Harem mode.
Fixed typos and corrected mixed up scenes from previous builds.
Added hints to certain key places to make it easier for the player to understand what’s in store next.
Added saves to the game folder with written instructions on how to implement them into your game should the need arise. (Saves don’t work for example.)

v0.4.1 Remastered
I have made far too many changes to count. So here is a brief explanation.
Fixed a few thousand typos… Removed all the ancient and unnecessary (Fake choice menus.)
Added choices to the opening scene, view, skip, and Remastered. Changed music in many places.
Edited writing on many scenes to better fit the scene, trimmed some of the writing in others as well as completely deleted some unnecessary scenes that were a repeat of what you had already seen before.
Added additional choices to a few locations, and a lot more. Play it to find out for yourself.

v0.4.2
Updated dom path with 248 new renders. Added switch play (Play as someone other than the MC.) in the scene.
Do not use older saves for this dom path, it may break the game. Please start a new DOM playthrough.

v0.4.2 Fix
Fixed a loop that occurs in the bathroom scene when choosing “Watersport option” which lead to a never-ending loop.
If you already have downloaded a previous version and do not wish to download again, please avoid choosing that option.

v0.4.3
Complete refresh (Partial rewrite, edit, and cut where applicable.) of the entire prologue, as well as fully proofread prologue along with love path. (Entire love path is now remastered, all the way to 0.4.3) I and Mr. Proofreader (BSF) Suggest you start the game from the start. What you do, however, is up to you.
Love 0.4.3 brings with it some 450+ renders (Dev lost count.) Relationship building choices, as well as some very unhappy choices.
Chose carefully, or save often and cry later.
Final note: I regret nothing!

v0.4.5
Continuation of Harem story, with 300 new renders and two animations. Set the first building block of your harem, with this build.
We now have a permanent home to catch them all in. Following updates will allow you to build relations and even choose, or pair girls to have fun with.
Further refinement of the harem (remaster) in its entirety from start to the current build. Includes corrections on typos, rewording, and a few other minor things.

v0.5.1
Added a few new renders that did not make the cut for 0.5, fixed typos and bugs. In addition, I’ve added the choice to skip the entire prologue and go to the three choice menu: Love/Harem/Dom any further and you would miss points, likely break the game worse.

v0.5.5
Continuation of the dom path, over 100 renders and 6 new animations. This is part one of two. Part two is coming out at the end of this month or March 1st. Also, the android build has now been added to patron monthly releases.

v0.6.5
Long awaited update to the Harem route
Over 300 new renders and 10+animations

0.7 (Love path remaster)
Additional content has been added to the previous remaster of the prologue, bringing it all the way to the three-way split, now. Over 340 renders and 6 new animations made the cut this run. Additionally, this update brings with it the very first OMVN-Oscar-Six (First dev-team member) Gallery mod included with it.