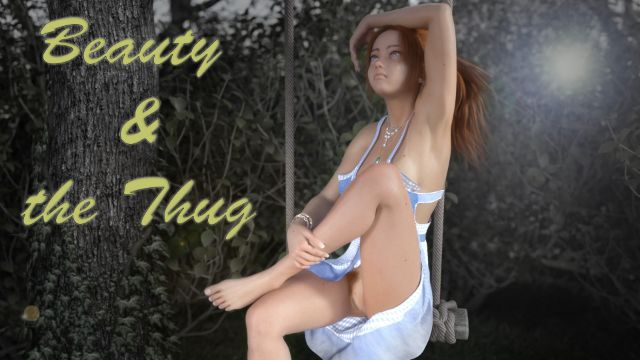 Beauty and the Thug APK Android – By the time she was eighteen, our heroine knew everything about her future. She was the best student in her high school and knew anatomy and physiology like the back of her hand. Being a doctor was her dream, her passion. But life is shit, and everything changed in one moment.

She is now nineteen and had to grow up quickly this past year. She needed a change and has decided to move to the city. She has to get rid of her childish dreams and become smart and strong. However, these changes cause her to delve deeper into various fetishes – the kinkier, the better.
Will she suppress her dark side or accept herself for who she is?
Will she meet her love or restore her old bonds?
What fetishes will she develop?
Will she become a shameless exhibitionist? An extreme bondage lover? Will she be strictly anal only? Everything depends on your choices.​

Special Instructions:
– Unzip and install apk.
– Grant storage permissions on first run!
– On first run you will get a prompt of where copy the week1.rpa file to.
– Copy the rpa file to the directory indicated in game. (game will quit now)
-Restart the game.

v. 0.1.1c
• added Day 8 (June 8, Monday);
• you can also play Day 9 as a sandbox day;
• MC is getting more sensitive; starting from the second week, she can have more than one orgasm a day;
• added a new dream;
• added one main storyline event;
• extended morning events;
• extended bathroom and shower events;
• added shaving;
• extended car wash event;
• extended home workout and jogging events;
• extended cooking: MC can progress from a dummy to a newbie;
• added one new location – library & bookstore;
• added four home activities – reading textbook, reading erotic books, bondage practice, and Internet research; the last one appears only when required;
• mc can invite Sandra (as a friend or as a lover); added a lot of sex activities for them;
• added three fetish nighttime events and two practice events;
• initiates two more fetishes – ass eating and watersport (will be developed in the next versions);
• added one more toy – ben wa balls (will be used in the next versions);
• added 14 entries of the game gallery;
• Italian translation;
• the game contains now 11266 renders and 1073 animations.
• look for more information here

v. 0.1.0a
• added Day 7 (June 7, Sunday); MC can have a short date with Hunter, spend the whole day with her new friend Sandra, and stay alone;
• you can also play Day 8 as a sandbox day;
• added several fetish events;
• added a few scenes for the bedroom, shower, and bath;
• added a new optional fetish – armpit fetish;
• now, you can save MC’s fetish skills and retrieve them when you start a new game (experimental);
• added 10 new entries in the gallery;
• slight additional compression of files;
• fixed some bugs;
• implemented Italian translation; German translation is in progress;
• the game contains now 9553 renders and 914 animations.

v0.0.7c
– added Day 4 (June 4, Thursday);
– added Day 5 (June 5, Friday);
– added 8 fetish events (6 in bedroom + 2 practices);
– added and extended a lot of scenes for foot fetish, blow job, anal play, pussy play, teasing, and exhibitionism;
– two new toys in Adult Boutique; a lot of related animations;
– widely extended bedroom events; a lot of new options; the more you learn – the more you get;
– added some new audio tracks;
– fixed some bugs;
– hotkeys for switching hairy/shaved; press A to toggle hairy/shaved armpits; press P to toggle hairy/shaved pubes; use still can reach Accessible menu via Shift+A;
– bonuses for my tiers: veeery skimpy home outfit and two aprons (also, veeery skimpy); will be available for all player in the next updates;
– “time loop” – you can replay the last day a many times as you want preserving everything you have learned;
– the biggest update in terms of new renders; the game contains 7188 renders and 777 animations;
– 32 new entries in the Gallery (a few scenes are made in advance for the future versions and are available for patrons only.)

v0.0.5c
– fixed bug on Day 2 where you can’t reach Good mood if you don’t go to the groceries in the morning;
– added some missed renders
v0.0.5b
– added Day 3 (June 3, Monday);
– added 5 Fetish events;
– added some more animations for bedroom events;
– new feature: Stat Screen (instead of Skills Screen) where you have access to shaved / not shaved options, skills, and all other features;
– new feature: Inventory menu (part of Stat Screen) where you can check how many supplies and what kind of toys you have (one toy + supplements for now);
– new feature: Ability to change MC’s outfit (from Stat Screen.) Works for home wear and sports suit (if you got access to skimpier options);
– new feature: Gallery to make sure you have watched all content. Besides this, MC will gladly give you a hint on how to open each image;
– all futa/trans content is optional now;
– small changes in MC’s appearance: better asset for MC’s breast
– small changes in MC’s appearance: unshaved pubes is bushier now; labia majora are hairy as well (shaved pussy is still available);
– access to game fonts for non-native English players. Find fonts that work for you, rename them with my fonts’ names, and copy them to the game/fonts folder with replacement;
– the game contains about 4200 renders and 580 animations.

v0.0.4c
– added Day 2 (June 2, Monday)
– added four fetish events
– added a lot of animations for bedroom events
– updated some existing animations to make them better
– reworked over 200 existing renders to make them better
– added new feature: you can change MC’s appearance right from the game menu in real-time. Now, you can look as any scene with different options just in several clicks!
– some minor changes in dialogues
– game contains about 2900 renders and 500 animations

Implementing the shaving options required to do major structural changes to the game code. Old save files will not work.

Where It All Began [Chapter 2 Beta]