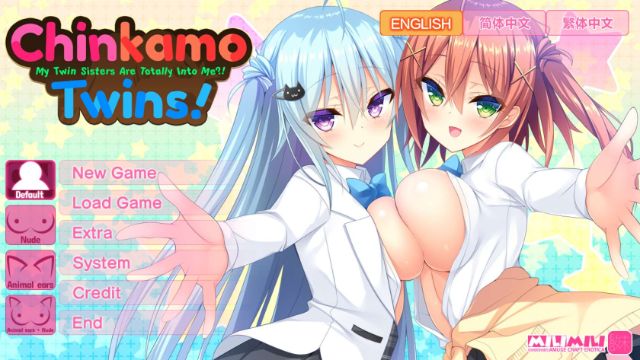 Uh-oh! My twin sisters are failing their classes!
As a teacher at their school, I feel obligated to help them study,
but these two girls have no intention of learning anything at all.
I’ve managed to get them to agree to study sessions in exchange for pampering them,
but now they’re saying they’ve realized their true feelings for me and are starting to fight over me!
What’s going on?
Being a big brother to two cute but headstrong girls was already hard enough without adding this to the mix…!
Come explore the depths of forbidden familial love with Chinkamo Twins,
a story about two twin sisters who love their Onii-chan a little too much!​

A gamer girl who knows exactly what she wants.
Saya hates studying and isn’t doing so well at school but she loves her Onii-chan like a good little kitty!
Clingy and needy, but keeps her distance in public. Prefers to stay in and likes nothing better than quietly snuggling up with Onii-chan when no one else is around.
Loves reading manga and gaming, and can often be found playing video games on her Onii-chan’s lap.
Skilled with the side-eye.

A sporty girl who always looks on the bright side.
Uya hates studying and isn’t doing so well at school, but she loves her Onii-chan like a good little puppy!
Likes to be out of the house, and can often be found nuzzling up to Onii-chan with a big grin on her face. You can practically see her tail wagging.
Sometimes tries to find opportunities to keep him to herself by taking advantage of Saya’s shut-in ways. Ruled by her emotions, she likes to be active and is prone to physical expressions (attacks) of love.
Basically, she’s kind of an airhead.