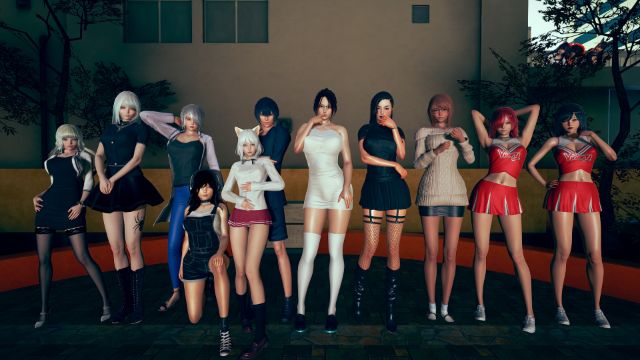 MC is an ordinary guy who has just started his journey of independent and adult life. MC goes to school, has a part-time job and rents a small apartment, without even dreaming of the love and popularity of all. However, one evening turns his life upside down when three unfamiliar girls break into his house. What if, by accident (or not by accident?), the MC now has the power to capture women’s hearts by subordinating them to his own will? So he finds himself in a world of lust and debauchery that he does not understand. What will MC do with the power he has been given, and how will his life be changed? It’s up to you!

With over 370 animations, more than 3700 images and whole lot more in store!​

v0.1.8
New Event with Elaine (Stepmother)
New introductory events at school with 3 girls
New event with Kendra
New event with Sarah
Also fixed a bunch of little bugs you wrote me about (thank you all so much for that!)
Reworked some of the early event renders

v0.1.7
Added a story event in Eldoran.
Added new mini-events in the story of Kate (the eldest of the sisters).
The bonus event with Kate is now a story event.
Added new bonus cheerleader event for Patreon subscribers
Added several new locations (currently empty, they are being actively worked on)
Also fixed a bunch of minor bugs you wrote me about (thanks so much everyone for that!)
Reworked some early event renderings

v0.1.6
Added a secondary event in Eldoran.
Added new mini events in Kate’s (the older of the sisters) story.
Added new Kendra events (Also new mini-game.)
Added in-game mini tutorial on working in the principal’s office, as well as a new feature (phone to call girls)
Slightly redesigned school classroom location
Added new location school infirmary, you can get there by advancing on events Kendra
In the infirmary girl from the prologue Jessica ^^
Fixed critical error if you had no character screens from Eldoran
Now even if you sleep in the tavern of Eldoran you have to get earnings from the club.
Also fixed a bunch of little bugs you wrote me about (Thanks a lot everyone for that!)
Reworked some renders of early events

v0.1.5
Added plot events in Eldoran.
Added new scenes with Kate (the older of the sisters).
Added Kendra’s introductory events, as well as 2 photos.
Added new bonus event for patrons
Added in-game tutorial when first starting the game
Completely redesigned event gallery code. Unfortunately, all events you’ve already passed will be locked in the gallery, but I’ve made a special password – ver1.3 (It unlocks all events from the previous version).
To unlock the entire gallery
Reworked most of the game code when you first try to open the portal to Eldoran.
Now, if you open an event in the gallery, it will be unlocked permanently, even if you start a new game or want to unlock another event.
For optional events there are now mini-tips. To see them, just hover your mouse over the locked event.

v0.1.4
Added 2 story scenes on Eldoran
If your class grade in school is above 6, you can make arrangements with the girls at the gym to watch them workout
Not attending 3 lessons per week will cause you to be reprimanded by the principal (You’ll be able to subjugate her in future updates!)
Added Christmas event (You can watch it on the pc in the club’s director’s office)
Added new teaser event with Elaine (Only for the Patreon version)
Fixed a game crash when talking to Elaine in the kitchen
After buying the pants, your pay at the cafe will be doubled
Rachel:
Teaser event is now a storyline event
New sex scene
New masturbation scene (weekend night in her room, the situation will depend on your level of control over her)
Kate:
Watch her stream from the PC in the club’s director’s office
Elsa (cheerleader Girl):
Added a mini game 2 sex scenes

v0.1.3
Sarah and Julia’s introductory event at school has been added.
You can now study after school with Lisa.
-Along with 3 new scenes with Lisa.
Expanded storyline with Riley and added new routines (maybe you should visit her at night 😉 )
You may be able to catch Littley in the shower at eight in the morning 😉
-Shower scene will vary depending on your choices throughout the game.
The Halloween event is available on the computer in the director’s office at the club.
A new teaser scene with Bonnie and Adison on the computer in the director’s office at the club (Patreon required).
You can see the password here
A lot of bugs fixed.
Reworked the code for Android.
-The button to open the map got a little bigger.

v0.1.2
Expanded story and lore
Now you can bring Elain and Littley back.
There are several ways for this event to develop.
2 scenes with Kate.
Many bug fixes

v0.1.1
A sex scene with Bonnie has been added.
Bonus Event 2 has been replaced (Thanks to Astromalagie)
The scene with Bonnie and Mia is now storyline and public.
The clothing store location is available at the beginning of the game.
Added hints related to the opening of the portal.
Your intelligence will no longer drop during classes.
Cheat codes can now be entered at the beginning of the game from your phone (Money, Character Stats and opening the gallery)
Code overhaul
Scene gallery
added Club expanded, main hall and additional rooms Club opening, hire girls and make your club great!
Expanded story and lore
Pants demon has been eliminated
Many bug fixes

v0.1.0
Warning. If you load an old save, be sure to go to the city map at the beginning.
2 story events for Eldoran
You can start building the club
Added 16 photo events for the girls (access photos in your phone)
Additional scenes and interactivity with Mia
Additional scenes after beating Rachel in videogames
Additional Kate events
Outfit events for Rachel, Becca, Cheri, Riley
New charisma stat (increase in the bathroom)
Pants now added to inventory
Overhauled character screens and hints
You can now keep track of how many times you’ve had fun with the girls
Added ability to enter cheat codes in the director’s office in the club along with bonus scenes
Updated navigation pictures
Entire game proofread
Misc bug fixes, improvements and etc.
Over 12000 words, 500 pictures, 50 animations

Basically, this release was aimed at completely changing the code of the game. So that future updates will come out much more often and larger. Reworked several renders from the prologue. You can now interact with the characters in the school. Added a swimming lesson and more. Enjoy the game!

Knocking Up my Nympho Neighbors [Final]