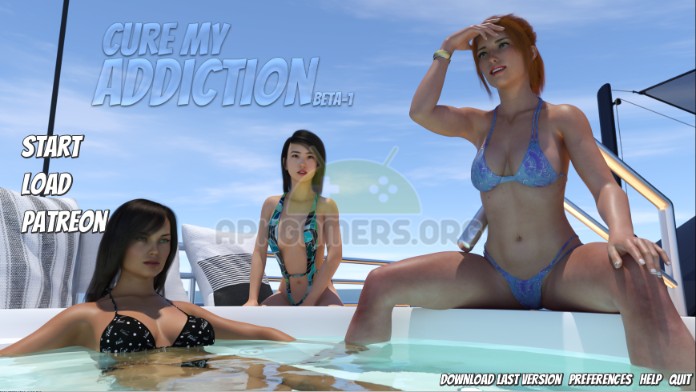 Apparently few years ago he becomes a millionaire and live a luxurious life since then. He’s married to Rachel and they have two daughters : Chloe and Emily. Emily, the oldest, was born from a previous relationship, I’ve never seen her father. Chloe was adopted a few months after my uncle married Rachel.

This will be a detailed changelog. Thus it can have spoilers so if you didn’t complete the game you might want to avoid reading. Unless you think you have a bug. As you might have noticed, this is the first time I’m experimenting with putting (limited) new content in a patch. It felt like a good opportunity for trying something new. I struggled with the idea of how to implement this update while staying fair to everyone. Patch should be ready for tomorrow or the following day.

Additionally, the new update has:
4 different endings for island week depending on what you did during the week. (this is in addition to the 12 new events – no double counting)
The ability to replay the week once it’s over or return to the yacht.
Several smaller changes and additions (Including fix for impossible stars).

v0.6.6
Fixed a bug that was causing the new yacht to be empty on a new game (related to previous bug fix).

v0.8.1:
Added “True Nature” to the dreams.
Fixed a bug that allowed the post-island dreams to be available before the event was completed.
Patch note:

v0.8.2
Added Extra naughty 2 as a requirement for True Nature (it was possible to miss it)
Added a warning about the island trip being disabled if you continue “True Nature”.

v0.8.4
Patch note
Added the possibility to start an island trip within the dream menu (after “True Nature”)
Fixed the unlock hint for “True Nature”
Removed one star from Sun Tzu #1. It will allow the event to be fully completed. Added it to the dream list for the players who missed it.
In some rare cases the total progression percentage did not update properly. It has been fixed.
“Am I Sick” can now trigger when the dreams are disabled.
Edited the tooltip of 2 stars for “Three Envelopes.”
Added Linda’s night visit event to pre-island dream for those who skipped it.
Chloe’s strapping in the dream menu now require “Extra Naughty #2”
Edited the tooltip of the first star for “The Deal #2”
Added a warning message if rollback has been enabled due to the recent reports of broken saves due to it.

v0.10.3
Most of the trigger that needed a specific render were not working properly. It was making the progression in “Good To Go” impossible.

Tracker:
The tracker has been improved to handle new types of events (like the one with the new NPC), it will show a list of “actions” available for each character, if you click on it, you’ll see the old tracker information with the star and how to complete/unlock it.
Its missing the percentage indicator for each character, it will be added soon.

Office content:
This content is mostly linear and introduces you to what is planned for this chapter. I want to make clear it’s not a direction the game is taking, it is just an introduction.
During the 3 days, you will spend at the new location, there will be a few night events, they have different outcomes possible. That doesn’t mean there’s a good or bad choice (no game over).
You can’t go back once you leave for the yacht (in this update).

Chapter 3 Episode 1 IMPORTANT: The Chapter 3 update is a standalone, you don’t need your old save. The game starts just after the end of the second chapter (download post). Essentially it starts you off with a 100% save when starting a new game.

Patch B
When doing the story in a specific order it was impossible to progress.
Fixed a crash

2000+ Renders, without animation! (Biggest of all time)
Amy’s path: