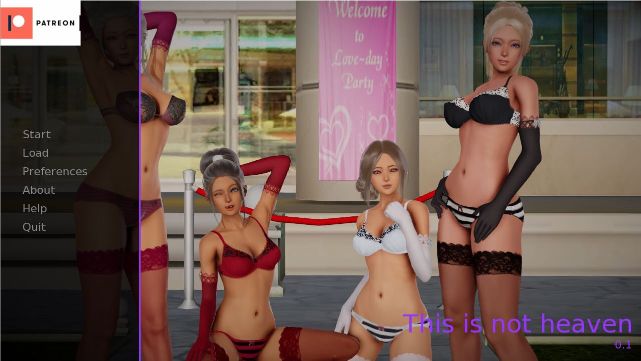 This Is Not Heaven [Final Update 4]

This Is Not Heaven APK Android Port – You are 22 years old and have just returned from a five-year trip to a strange place. There was no internet access and there was a power outage every night, but at least you learned plenty of new things. With no family and nowhere else to go, you have decided to go back to the person who raised you, excited for what you will discover in your new home.​

Contents:
The first ending.
Located at the moment you decide to open the door instead of continuing to sleep.

V0.12
-Small update
-Triss
-Story.
– “Special Thanks.” (I’ll talk more about this)
-Now in the game menu, you can find 2 new options!
The first one makes the text stand out, that makes it easier to read!
And the other serves to hide the text box, this way will be transparent, and you can better see the background images while you read! All this was created by “Penfold Mole”, give a great thanks! In this way the experience improves!
-Version 0.14 will be even bigger than a normal version! So be patient!

V0.10
-Important decision (Kiara.)
-Triss
-Eli
-Alison
-Sarah
-All messages prior to version 0.10 have been deleted (If you find any other, let me know.)
-The gallery was updated to version 0.9. (All unlocked.)
-Fixed some bugs.
-Important message at the end of this version.
-Last, but not least, this is the version where MC takes the most hits.

v0.8
-Some grammar corrections.
-A bit of Jill, Eli, Zoe and Lila.
– Some flashbacks of what happened at the work meeting.
– This version will be a little more focused on Triss, Kiara. (Since it was a tie in the vote that was made.)
– In version 0.9 you will see the changes regarding Eli (Tits)
– There will also be two new polls, one related to Kiara (Patreons Only), and the other related to current women’s clothing.
v0.7
N/A

Ver0.6:
From this version there will begin to be:

Ver0.3:
-Jill’s Story
-Lila’s Story
-Main Story
-Photo session with Sarah.
-New section “Wet Dreams” (Inside the game it is explained how it works.)
-New Character.
-The entire game can now be played from version 0.1:
-I had to scale the images from version 0.1, from 720p to 1080p.
-SAVED GAMES OF VERSION 0.1 DO NOT WORK.
-I made a change in the skin of the MC genitalia, now it looks more real.