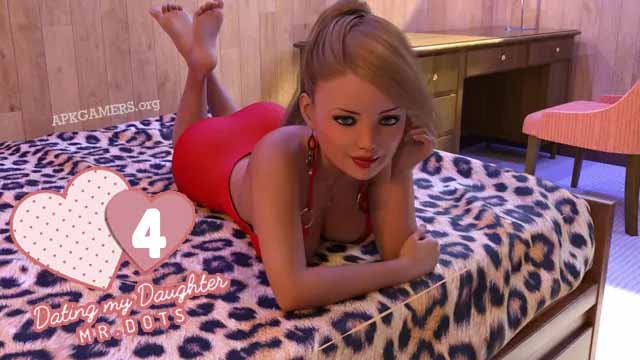 Dating my Daughter APK Android Port
Main Plot: You’ll assume the role of a divorced father who hasn’t seen his daughter in years. Now that she’s 18 years old, she contacts you and tells you that she would like to have a “father-daughter” date with you. You’ll have the chance to get to know your daughter better, build a special relationship and why not, maybe convince her to have more “father-daughter” dates with you in the future.

Gameplay: You’ll be making choices between two or more decisions that will negatively or positively affect the outcome of the date and the main story as well.
There are two stats (at the moment) in the game: Friendship and Love. You can see them at the top right corner of the screen.
Every time you make a choice, you’ll win or lose a point (sometimes more than one) depending on the decision you make. For example, if you choose to stare at your daughter’s ass and she catches you, you’ll lose 1 friendship point.
You’ll have to get a certain amount points to advance in the game. If you fail, you’ll have to repeat the date.

Characters: You can choose your name as well as your daughter’s name.There will be secondary characters like your ex-wife, your daughter’s best friend, your coworkers, etc. but the main focus will be on F/D content.
Most fetishes are optional so if you’re not into some of them, you can choose to disable them.

you can continue save files of DMD.CH2, but only, when they were saved at the very end.
copy your files into the save folder of DMD.CH3 and proceed as usual. files that are not useable, are marked invalid. i advice, to delete all invalid files, cuz they are checked every time, when you access the load/save screen and this is a slow process.
you can also start a new game and input some fantasy values. but i hope this won’t become the new trend how to continue games.

Anyway, today is all about Version 32 of Dating My Daughter, and we have definitely progressed things between D and F, plus some of the other important characters in the story.

We intend to give every main character in this VN a satisfying conclusion and to try and tie up as many loose ends as we can before the story ends. Preferably all of them!

The previous update contained quite a lot of drama with Cassandra finding out about your relationship with D, the tension between your daughter and her best friend Elena, modelling rival Tyra has unfinished business with D, adapting to living with your daughter and Georgina in your new house, and then the mysterious phone call just before the end of v31.

In this new release, we’ll find out who was on the other end of that phone call and what their intentions are, you will have a night out with both D and Jennifer (or just your daughter if you are not on the Jen path), and things heat up when Cassandra makes her intentions known to both of you.

Your daughter will also try some new things with you that she hasn’t previously and we will see another petal drop in this update, leaving us with just three petals remaining!

Another character who has been a stumbling block for you and your daughter will return to town. Any idea on who that might be?

And after the pregnancy scare at the start of this chapter, we can confirm to you that in this update, you will be able to knock Dee up which will have some implications for her career in the modelling industry (if you decide to do this).

Changes we’ve made
In the main menu on the Load Game screen, we have added the option to be able to skip through more than 12 pages of your saves at a time.
Previously you could only skip through one at a time after the ninth page.

For $20 tier members – We have uploaded the images separately for you to download them all!

This is something that quite a number of our fans have requested recently and we will be doing the same for Sunshine Love for members of our highest tier.

Thanks to anyone who sent me or any of my team any errors that you found in the game.

With not much of a break in between working on both VN’s, we sometimes don’t have the time to go back and fix certain problems which is why this revision month is in place (to give us a chance to do that).

We want our games to be as perfect as we can possibly make them, and that doesn’t happen without your help.

So again, we thank you

• Fixed a lot of grammar and some plot holes (remember, the game is written in British English, except for some minor exceptions)
• Added sound FX and music for all of Chapter 3 (once the game is completed, we’ll look to add more sound FX in wherever we can)
• Music is now properly controlled by the “Music Volume” instead of “Sound Volume” in the game settings
i.e. Any scene where music tracks are playing (mainly club or dance scenes). The “Sound Volume” controls the audio for the sound effects
• Background sounds and foreground sounds can now play at the same time, instead of interrupting each other
• If you accidentally click “New Game”, you can now return to the menu without having to answer all of the questions first
• Added a “Deleted Scenes” section to the menu for Chapter 3 (you’ll see this on the Home Screen)
My main writer HearszAM had already written two extra scenes for Day 40 which I didn’t have time to create renders or animations for.
However, I have added those scripts into this section so you can read how these scenes played out.
He has also written scenes for Olivia and a scene for Margo (also for Day 40 originally), but at some point, I’ll look to use them in Chapter 4 instead.
• Added “Pat’s Gallery” (you’ll see this on the Home Screen)