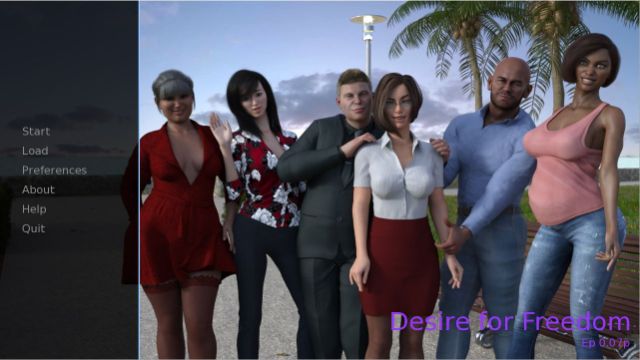 This game tells the story of a family that is tired of everyday life and is trying to diversify life and bring joy and happiness into it as it once was in the past.We recently moved to a new city on the coast for a change of scenery and the beauty of the ocean.

– The return of Sam’s daughter (Mary) after college;

Starting with this update, public versions with few renders and no animations will be released all the time

Just a reminder that in this update will be:

– A new scene in Alan’s office (Alan gets a job from Olivia but can not do it in time in the next update, which will be punished);

– A new scene in the Bar after work;

– New scene in Kelly’s apartment after the bar;

– A new scene at Alice and Richard’s house.

v0.075
– Bug fixes in the code (Bartender Pfil) and others;
– Reworked the first scene with Amanda from earlier issues, including 2 new animations with her;
– Added Animations from the last update.

v0.06
– The last event of Sam’s choice when meeting the MC in the office (0.04) will be divided into branches:

1) MC inside SAM in the office -) after meeting her husband Sam will allow inside and he will do so… or he will suspect her and will not go inside after which there will be a serious conversation ;​
2) MC not inside SAM in the office -) Alan will not suspect anything, but also can not do inside Sam – the events of MC and Sam will remain secret to Alan.​

– The new scene of the new working day will take place in the office. An old friend will come to see the MC. There will be a choice:

1) Share Sam with the old friend (trio);​
2) Not tell the friend about the secret relationship.​

– Fixed renderings of Alan in previous updates.
– Edited small bugs in the code.

A Date With Emily [Completed]