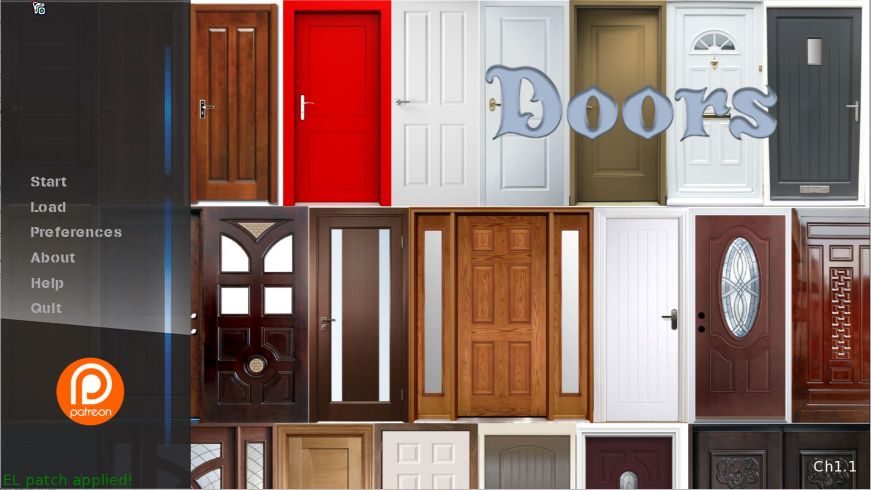 The plot revolves around a complex family, their close proximity of friends and an event that changes their lives dramatically. The main characters are a happily married couple and their four adopted kids, but the main story is told through the eyes of the second oldest son (the player). Doors has a deep plot, detailed character development, and dives into subjects like betrayal, love, relationships, fantasy and lots of dark secrets to explore.​

v0.7.0.1
Here it is fam! Was a lot of work, but I’ll hope you enjoy it. There will be an update for this one, which will add (complete?) 2 more routes to the final third of this already huge (in terms of size/scope) release, but you’ll gonna see what I’m blabbering about eventually.

v0.6.9
Updated the patrons’ vid.
– 300+ renders
– Multiple new animations
– New SFX
– The MC’s looks have been updated just like the girls
– Riley also got the upgraded looks (Duck lips rulez!)
– For the first time the game (this update) got an editorial treatment
– Added a new, unlockable fetish to the game

v0.6
In this one, once again, there are multiple routes you can explore, depending on your previous choices.
The final render count is 240+, added multiple new SFX, and made a bunch of smaller changes here and there.
If you have questions, wanna give feedback, just put it in the comments below.

Oh, and don’t forget first to load the save from the previous update, where you have to choose between the neighbors or to tag along with the girls, and there of course choose the girls to start this update’s story. If you don’t have a save for that particular choice, just load one before that and just skip to it.

v0.5
As you can see, there is a version number in the title, and not the usual chapter/part numbering. To keep it short, I messed up the pacing of the game, plus, other unforeseen problems with the branching storyline forced me to abandon it. The old chapter/part transitions are still in the game, I will remove them in the next one.

I intended to release this update last week but as I playtested the game, I realized that there are a ton of small things that are missing from the storyline, like smaller conversations that connect bigger parts, or SFX for certain scenes.
I’ve made a couple of animations for the first time, so I’m excited about your feedback on that front, be that positive or negative (in a civilized manner :3 ).

Content-wise, it is over 400+ renders, a few animations, and a lot of new SFX for a more enjoyable gameplay experience.
Now, I have to give a heads-up here about the story, mainly about the past decisions that you made in the game. Numerous scenes unlock ONLY if you made certain choices, reaching back as far as when the protagonist (you {I don’t know why I felt the urge to point this out XD}) has arrived home. I will also update the walkthrough in the coming days, knowing that many of you will get frustrated with certain parts of the game. ꆛ

Ch.3.2
» Implemented 244 renders.
» Bisexual route has been implemented. (note for those who are wondering about the “gay” tag)
» Fixed a few typos.

Ch3.1 (see Patches section for Bugfix)
» Because of the significant changes in the code, your old save files probably won`t work. To avoid problems (error messages, crash etc.) I recommend that you start a new game.

Ch2.3
» Implemented 144+ renders.
» Added a message to every side story`s ending
» Some minor fixes

NOTE: To avoid any errors, load a save which is before visiting Riley at her house.
NOTE 2: The previous upload was an unfinished version (2.2.5), mainly for bug testing purposes (by patrons), hence the errors some people experienced. I didn’t want to upload the aforementioned version and it was done without my knowledge.

Ch. 1.3
» Implemented 140+ renders.
» Fixed some story consistency errors.
» Fixed some grammatical errors.
» There were some changes in the code, so using older savefiles could produce some minor glitches (Name and name color change, etc.). Starting a new game is recommended.

Ch. 1.2.1+
» For an unknown reason, there were a few lines of code from part 3 at part 2`s end, which of course resulted in an error after a couple of lines do to missing assets.

Ch. 1.2.1
» Fixed some spelling errors
» Made several corrections in the story. Thank you, Gloria, for the editing!
» Changed the intro`s volume
» An option to skip the riddles has been added
» A few renders have been added, mostly for a smoother transition between scenes

George and the Medical Degree v0.0.8