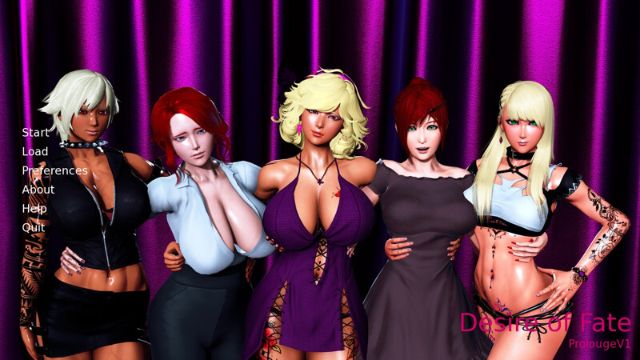 The country is plagued by unrest, broken, and recovering from a years-long civil war that claimed countless lives — and left you an orphan 21 years ago. Your life has been a humble one, growing up in the ass-end of nowhere and then living in the seediest slums of the big city as you try to carve out some semblance of a future for yourself. You don’t aspire to much — but fate, it seems, has bigger things in store for you. As the country’s rich and powerful attempt to restore order and instate a new supreme leader, your life begins to take new and unexpected turns, thrusting you into the middle of a deadly power struggle. Against all odds, a poor orphan from the slums just might emerge as the most powerful man in the nation.

***This game contains a few dark elements. Additionally, relationships with 5 of the main girls are mandatory where one of the girls has previous lesbian experience. If this is not your thing then this game is not for you. For additional information read the dev notes.***

Ep.1 V1
This update is more story focused for setting up future plots and character development.
In terms of content, it is equivalent to the last update.
Unfortunately, this update consists of only one big but optional sex scene with minor variations.
Some changes in the UI
Relationship Stat Page added.
A Minigame was added (Optional).
The stats for choices were balanced.

You can now view your stats from the top left of your screen.

1 new scene with Lily. (Minor) (If lesbian action was allowed in the prologue.)

Introduction to some new characters.

Some minor changes in the prologue. ‘King’ has been changed to ‘Emperor’, the conversation between MC and Leyla after the knife scene.

PrologueV2 (Bugfixed)
This version of the game mainly contains some minor fixes including bugs and typos. This version also includes Textbox with the option to adjust the opacity. And, infinite save slots were added.

[PrologueV2]:
Think of this as the first official release. It has been properly proofread and tested. This version is more user-friendly and is 1080p. It was 4k before, but 4k is problematic for a lot of people and Renpy wasn’t built for 4k. This is the end of the prologue.
The current version contains 1600+ images, 38 animations, 3 big sex scenes (I scene contains minor variations), and quite a few minor scenes. The update should be at least 1 hour and 30 minutes long with an average reading speed. There are a few variations depending on the choices you make. As this is the prologue, the variations are limited.
This is a point-based game. Your choices will have minor to major consequences. Just don’t be an ass.

v1.2
Introduction of 2 new modes (Normal and Hardcore)
Updated GUI Made some adjustments and polished the previous version a little.
500+ new renders This update is story-focused mainly and does not contain new sex scenes. (Suggested to play from the start.)

v1.1
– No new contents
– I am introducing 2 modes:
Normal Mode – No sharing/swinging etc and sexual interactions with girls involved with other men will be optional after the prologue
Hardcore mode – Will contain scenes involving other males
– There was a complaint about the button during some animation. I made it optional. It can be turned on/off from the preferences
– Removed some hair from the back.

Initial release. Think of it as a demo