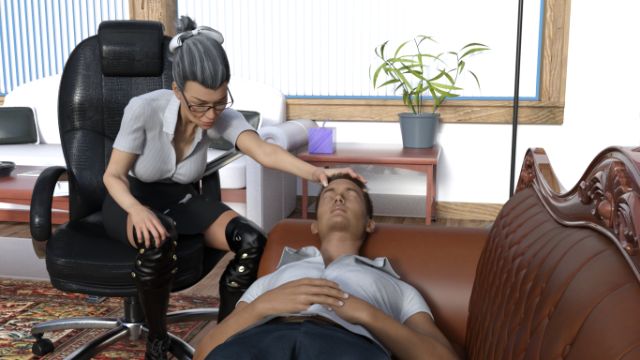 Dreams of Submission places you in the shoes of a regular guy who has to come to terms with his own kinky side. In order to save his relationship our hero allows himself to be put in a hypnotic sleep as his therapist constructs a harsh world ruled by dominant women inside his head.
Welcome to Somna City!

The 0.1 version serves as a prelude/intro to the later game. It does offer you some limited choices but has more the feeling of a kinetic novel. The game from there on out will offer the player more freedom including quests and several routes to achieve them.

This is a female domination game. It will not have a male-dom route and the chances of getting revenge on your tormentors will be minimal. Still there will likely be different stages of submission or defiance, depending on your play style. But don’t get any ideas: Defiant subs will not get off easy here. (But any controversial kinky will be skip-able.)

v0.10 Release
Including about 140 pictures and 5 sex scenes