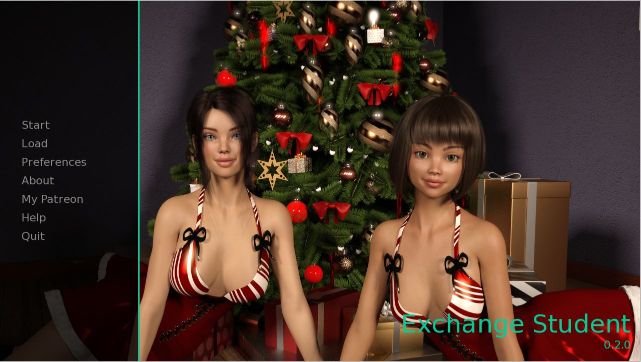 The story is played in an alternate universe which is similar to ours. Here your male character who is a university student decides to join in an exchange student program, where two universities from different countries exchange students. These students will spend one semester in their new institution. All of the exchange students will live at a host family and the university decides who will go to which family. The story will focus on the main character’s life at the host family. Unfortiunately his name is usually given to girls in this new country and because of this he was put to a host family where they were expecting a female student. And this is where his story will start.​

v0.2.1 Fix
After redoing some of the code I accidentally left a tab in the wrong place and it made Lily’s movie night skip to the morning after talking with her. I fixed it and now it is working properly. I played through the game a couple of times and didn’t find any other issue.

ES 0.3.0 Changelog
– Continuation of the story for both girls. – No need to explain this.
– Expanded options during the day. – I’ve added some options to do depending on the room you’re in and on the time. Also you will have conversation options for both girls. BUT most of them will open when you reach the end of 0.3’s story. The reason is that you will unlock more and more options to do with the girls as you progress the story. (Idea behind this: Before kissing a girl IRL you should have some sort of connection with her or you will be slapped in the face.) Because of how the story is developing, there are way more options for Lily, but keep in mind, MORE WILL COME later for both girls (I mean a LOT!).
– Branching. – In this update you will have a crucial choice. Depending on what you choose the story with one of the girls will drastically change! (If it’s not obvious at first I might change on that.)
– I changed how you trigger most of the events. – It won’t be like in 0.2 where if you completed the requirements of an event it would just trigger and jump there. From now on you will receive some sort of hint at the end of a conversation and you actually have to go there. I highly advise to read at least the last couple of sentences of the conversation to know „what you should do” or „where you should go”.
-Not a bit deal but there is hidden lust system for the MC. As the day go on you will build up lust which you have to deal with…if you know what I mean. It is based on IRL thinking when there are normal chill days and there are days when you could fuck anything that moves.
– After reading through most of the texts I fixed a lot of grammar issues and at some points I even changed the whole conversation so it will make more sence. But it’s still far from perfect. I’m working on it.
-Since I changed how events will trigger please read the texts carefully. It might not perfect and might be confusing at first so here’s some tips:
– For Lily watching movies are crucial! If you think you can’t progress with her just talk to her when she is in the bedroom. Also some of the events are repeatable, doing them might open up new choices and events.
– For Molly most of the events happen after you come home. If you feel you stuck try to talk with her.
– After receiving the „end of the story” message for one of the girls you can do various things with her. Mostly available for Lily.

v0.4.0
This update focuses on the story for Lily and Moly’s branches. It will introduce the first event of the weekend trips which will be important for the story later on. I tried to focus on the quality more than the quantity. I hope you will like the new pictures, making these 200+ images took me more time than I expected. Also as I played through the game to check for bugs I decided that I should remake the whole intro and some of the first events or at least update the images.

v0.4.0.b
I have fixed the bugs I could find, especially the one which prevented to see the new events for Lily. There should be no issues from now.

v0.4.1
-New repeatable freeroam events (more on this below)
-Updated VN mode
I have also changed the story event where Katie gives a vibrator to Lily. Yes you can see it in the VN mode too so it’s faster to check it out. Not a big change but still.
In 0.4.1 I have changed all repeatable events apart from the yoga, run, and Lily’s weekday movie night and also added the missing weekend night and molly’s bathroom events. There are 9 base events and some (3) has multiple levels which mean more content will unlock if you repeat them. I also had to update all of the pool scenes now that you “unlocked” the new bikinis after the first weekend trip.

v0.5.0a
What to expect in this update?
In short:
– Continuation of Lily’s and Molly’s (both lover and friend route) story which will end with the second weekend trip.
-Introduction of 4 new characters.
-Bugfixes

The long version:
After a lot of blood and sweat this update is in the finish line. If I would have to split up the game into episodes (in terms of the story) this version would be the end of the first episode. Molly’s friend route is basicly a setup for future content while in her lover route she finally overcomes her inner demons but you will see this (I hope you won’t hate some drama). Lily’s content is a mix between setting up future content and learning (practicing) new and interesting things… *winky face*. Also Lily’s last even is the biggest I’ve ever done it’s one sixth of the whole script that’s allready in the game for her and it has more than a hundred images. In terms of images this update will bring 450+ new pictures. Just for comparison there are approximately 1100 images in the game up until this update.
This version will also introduce 4 new characters although you will only meet 3 of them personally. One of them will only appear in Molly’s friend route. In this version you will also visit Katie and in the next story update you will be able to visit her whenever you want and progress with her too.

All in all I hope you will enjoy this update!

(Also some side note just to be clear: In Molly’s friend route the mc doesn’t has any romantic feelings towards Molly. They are only friends. So if she has a sexual intercourse with a men (especially with someone who you choose her) you the mc won’t feel being cheated on. I wanted to make this clear becasue I know that there are a lot of pleople who dislikes ntr and might think that this is that, but no. It’s not. It’s just your (the mc’s) friend and her boyfriend being in a romantic relationship.)