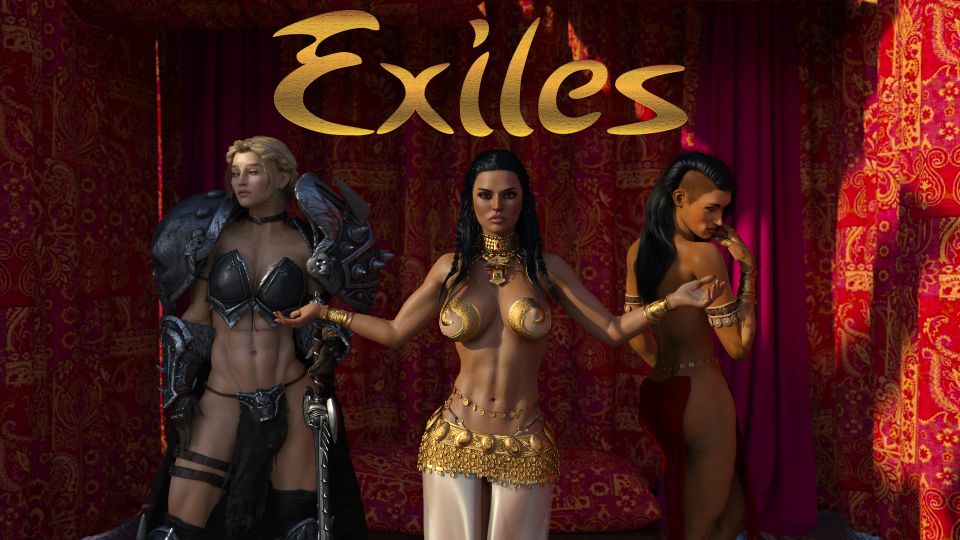 Exiles is a fantasy adventure taking you from a 1001 Arabian Nights style land to far colder climes across the ocean to the other side of the planet (and maybe off of it) as the fate of the world hangs in the balance! You grew up a penniless orphan on the streets of Dumat al-Julfar, never expecting what fate had in store for you. Taken into the service of a rich patron, you’ll rise from lowly servant to epic (at least somewhat) hero! The story doesn’t take itself too seriously though. Along the way you’ll meet three primary supporting characters/love interests:

1. Kadijah, a mysterious femme fatale who may know more about what’s going on than she lets on. Is she manipulating you or is there something real underneath her facade? – Female

2. Tahir, a surprisingly friendly (and feminine) member of a rival gang. Quick on his feet and quicker with a blade, he’s a worthy friend (and perhaps something more?) – Guy/Femboy

3. Astrid, a warrior from the other side of the world serving as a bodyguard for the Sultan and his family. Stoic and taciturn, there’s definitely more to her than meets the eye. But can you get her to open up? – Trans

Also there will be banging. I stress that you don’t need to get into any sexual situations you aren’t comfortable with. Only wanna sleep with Kadijah? That’s fine! Only Tahir? Good too. Astrid exclusive? Perfect! All three of them? Sure why not? Sleep exclusively with non-main characters? Maybe! Nobody at all? Not sure yet!

The three primary characters will still exist and contribute to the plot though as they make up the core of your traveling party. There will be plenty of opportunities for “excursions” with side characters across the gender/sex spectrum though. The genders and sexual preferences of some of these flings will be up for voting by patrons.

Sexy Witch 4: The Dungeons and The Bungler [Completed]