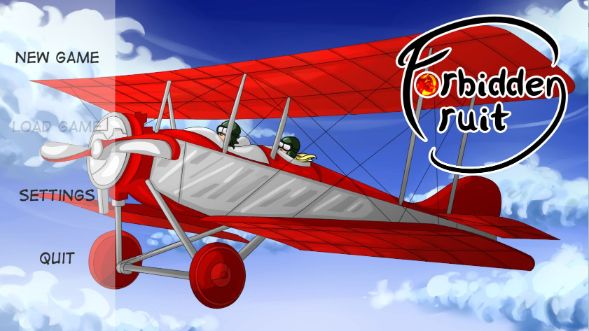 Forbidden Fruit APK Android Port – Would you like to be on a bright island full of adventures, secrets, funny characters, exciting story, of course, a bunch of friends and scary monsters? Then discover the Forbidden Fruit!
Maya and Leo – brother and sister, the main characters of the game, around which the events unfold. The most interesting part of their story begins when, after graduation, they decided to visit their parents. But on arrival home, they were surprised that the whole family will not be able to get together as before…​

v0.5.1 Reworked
– New storyline!
– 4 New cool outfits!
– 2 cool new scenes and 2 additional scenes! ( around 40 animations)
– additional art for the beach location!
– Also in this update you will see some of not main characters in outfits too!

v0.8.2 (0.1 Remastered)
– Now the game is not linear, you can choose what will you do and with whom you will build relationships
– 2 new scenes ( one of them rework of the old scene)
– Rework animation for 14 scenes
– rework of almost all mechanics
– Rework of all mini character
– Rework of some dialogue characters
– New Battle location. ( jungle)
– Animal dicks
– additional ways in dialogues
– Additional scenes

v0.7.2
– 3 new scenes ( one for the storyline , two for the dungeon)
– New outfit for Maya
– New storyline
– Reworked dungeon
In patreon build:
– More variants to the main scene
– A new outfit from the patron
– New quest from patron ( +scene)
– New variations for the main scene
– New characters for dungeon scenes.

v0.7.1.1 Bugfixes
– In the patreon build added function to open the full gallery
– We fixed all bugs that you found
– Added 3 modes to the game (easy, normal, hard)
– Fixed problems with sprites ( Maya, campfire, Lucky-crab etc)
– Fixed black screens in mini-games
– Fixed some logic mistakes with sprites (like when Maya looking for the key, she moving with Leo, but should alone)
– Added all costumes to the Shanas shop from the beginning
– Added Victoria to the Dungeon.

v0.6.2 OA
– 2 new animated scenes + additional variant to the previous scene. ( don’t look that this is
just an additional variant, you will like it
– 2 New characters!
– Continuation of the story-line!
– New additional scenes
– New outfits

v0.5.3 Public Version
1. We added 2 modes to the game: Feral dicks, Human dicks. At the main menu, you can change mode, and all the content of the game will change to your choice. (Still for 20$+)
2. We made variants of animal dicks to all scenes with animals. Now sprite of Raj and other animals in scenes have animal dicks.
3. From the next update, the additional variants of scenes and other stuff of 50$ Patrons will be only for 50$ patrons.
4. We changed the shell system because patreon can’t give correct information about current patrons because some people can donate only ones but not get monthly subscriptions. Now we will count patrons by their lifetime. For example, we will add additional content for the golden shell when we will have 3 patrons who donated 150$ (each) for the whole time. The other shell will have a small figure of donations but the bigger amount of people.
5. We tried to fix the save system. From the update (0.6.1) you can save your progress and upload it in 0.6.2 and other future updates.
Also, we made a lot of bug fixes, added a lot of items with new stats, and make a lot of small things (like change sprites near the fire, etc)

v0.5.1 Bugfix2
– Now we show you the way through the storyline by marks. Now you will not have any questions about where you should go, or what you should do.
– Now you can open the gallery in easy mode, and now this is not only the pictures or animations but it’s scenes from the game with text.
– Added a lot of small things for comfortable playing. For example, we added tips to riddles, also if you don’t want to read the text, you can skip it. Made mini-games easier
– Added explanations of the new mechanics when you will find it for the first time in the game.
– Fixed crashes, bugs, Russian text in some spots, etc
– Now you will not see animations in public build

v0.5.1 Bugfix
Bugfix:
– Sort quests. Now you will not have questions about quests.
– Moved clothes for main characters from box to shop.
– Changed sizes of characters.
– More items after combats.
– Now characters will arrive with 1 hp, you win a fight.
– Changed combat system.
– Added quest mark to locations on the map. Now you can see with whom you should speak on the map.
– Made mini-games easier
– Now you can skip combats.
– Now you can use tips in riddles.
– Made small things for quests ( like numbers) more visible.
And a lot of small things.

Also, we know that you have some problems with your antivirus and auto-update in the game. So we decided to add the button “update” to the menu. When you will press it, you will get the last version of the game.

v0.4.3 Christmas build
!!! The correction in English of the whole game !!!
– New quests!
– New scenes! ( we will not tell you how much, let it be secret
– Continue with the storyline!
– New outfits!
Combat system:
– Huge spiders!
– Angry wolfs!
– 2 floors with monsters!
– New locations!
– New items for characters ( weapon, armor etc)

v0.4.1
In this update you will see:
– new mini-game.
– Some small stuff for main characters ( lipstick, flowers, gloves etc)
– 3 awesome scenes with Maya.
– about 80+ pages of storyline.
– 2 new characters.
Also, we added a loot box system. You can buy boxes in the Shanas store, open it and get scripts with our old arts, small items for characters.
And! For our 10$+ we made additional build, with additional content inboxes

v0.3.1a
We added 2 mods in the game: normal, hard.
In normal mode, you can go trough storyline and skip riddles, and mini-games. But you will not have access to extras, you will see the scene once.
But if you want to add scenes to extras you should play in hard mode.
* we understood that you don’t want have ant difficulties in the game, so this update for you*

v0.3.1
We added so many changes, so we don’t want to waste your time reading them all. It’s just like a new game.

v0.2.1
In this update, we fixed bugs and made localization for Russians. We are from a CIS country, so we cant leave our bros.
(For Russians) We translated all storyline, didn’t translate the quests and characters. We will do it in future updates.

v0.2.1
In this update, we continued the subject line. But so far the magazine, tasks, and other functions are blocked. They will not be necessary for you in this updating. In the following version, we plan to add the main mechanics therefore now just keep following the main storyline.

v0.1.1
We tried to correct our mistakes with a bad translation into English, so you can try to play it again.
And we have considered your wishes for future versions and are already working on the next version of the game.
Thank you for your activity.