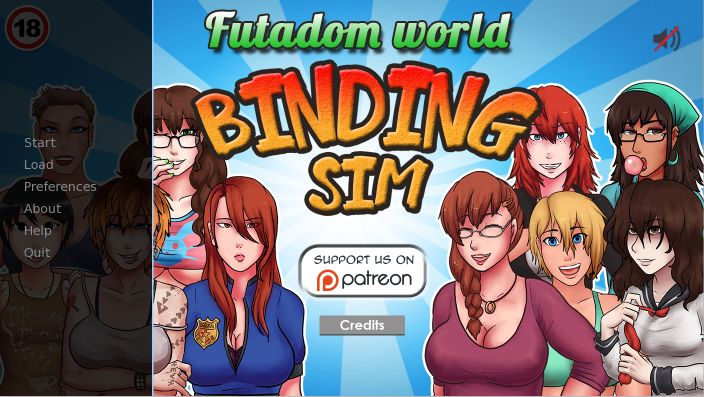 Futadom World – Binding Sim is a dating simulator game. If you’re familiar with the flash games Sim Girl or Ganguro Girls, you’ll see exactly what it is about. It is a kind a simulation game where you play a guy looking for love. This game is a bit different. Your goal is to choose a character among many, and seduce them… before someone else decides you might be better as a slave.
To do so, you’ll have to study, go to the gym, buy clothes, work, earn money, develop your sexual stats and talk to your futa crush.​

Porter’s note:
Blown dance automatically plays for about 1 minute and then ends on its own

Also, we added artworks by ourselves for:
Stacy – the more you invest, the less clothes she wears. And then…
Chloe – her gang bang pic line is now illustrated
School silhouettes – this place is not empty anymore!
Goddess Day:
The Goddess Day event is randomly triggered between Day 25 and Day 35. Betty will tell you a little more about this event at the very beginning of the game, when she first comes to collect rent. Depending on your stats and romances, there’s a lot of different possible outcomes during Goddess Day:

Ask for Vicky’s assistance. It didn’t work with Shauna, but who knows?
Try to blend in the crowd and meat with Sally and Draga.
Seek protection at the MREA headquarters. Claudia is your friend, right?
Flee to the temple and meet Mallory. Sanctuary!
Hide in Buttfuck Lane, aka Rye’s domain. A dubious choice…
Trust Suni and Sara to “save” you…

v0.3a
-Instead of ending at Rye Part One, you can now play Rye Part Two.
-Drunkotron and Danceblow can now be enabled/disabled in the Settings
-There is now animation on the previously unanimated things
-Several million typos have now been corrected
-With the introduction of Rye Part Two, several million new typos are now present
-Nonlinear gameplay! Rejoice, in your free will!
-Multiple configurations of Romanov family threesomes are now possible

v0.3b
-Instead of the game ending at Rye Part One, you can now play Rye Part Two.
-Drunkotron and Danceblow can now be enabled/disabled in the Settings
-There is now animation on the previously unanimated things
-Several million typos have now been corrected
-With the introduction of Rye Part Two, several million new typos are now present
-Nonlinear gameplay! Rejoice, in your free will!
-Multiple configurations of Romanov family threesomes are now possible

v0.5a
-Three new sex scenes with Shopkeeper Stacy
-Claudia’s tax day now contains an alternate payment option
-Betty now offers you an opportunity to earn a discount on the rent
-Ass-eating
-A new futa to talk to in the park
-School now contains a teacher
-Teacher now abducts you
-MREA no longer empty
-When captured by Shauna, Claudia/Demetria phone calls now result in something new.
(from the comments: Rye’s friends will get some action soon too)

Gym updated
-Sweaty Futa finally lets you lick that sweat
Rusty Starfish now visitable, with
-Irene proposes an alternate to conventional employment (mechanically implemented but the art won’t be out until at least Sunday)
Downtown updated
-Big Titty Goth GF
-Absolute Bimbo
-Just a little romance
-Repeatable scenes with both
-Display updated
Such that place names now appear at the bottom of the screen rather than overlaid on the image
-Flagging updated
Such that incomplete paths (like confessing to Mallory that you were flirting with her) now announce as incomplete rather than just grayed-out.

-Hanna is now hidden until the Athena quest has started (players were confused by her unclickability)
-Rusty Starfish jobs now have art associated
-The “no text” glitch should now be resolved—it turned out that players whose default system language was Russian or Portuguese would get (empty) translation files loaded in instead of actual text.
v0.7.2
-The locker room Team-Building-Activity is now animated, with some slick dialogue presentation stuff coded by the ever-brilliant Bert.
-A gang of cockney hobos can now rail you in a back alley. (Finally)
-Art for the Rusty Starfish jobs is now present
-Mallory Part One is now implemented.
v0.7.3
-Additional five-and-a-half Mallory dates.
-Abbess Gretchen edging minigame
-A futa-on-male scene added (for you heretics)
-Fixed a bug that made Claudia’s radio sound effects crash the game
-Fixed a bug that made Twoholes crash the game
-Hot Yoga
-Mallory is now 30% more ruthless and insane