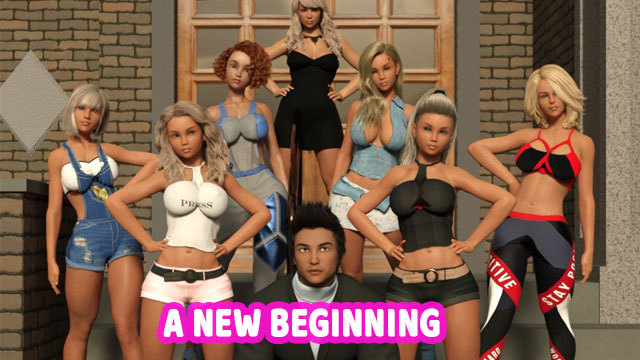 A New Beginning APK Android Port – A young man who left everything behind, as a teen, now has started to reassemble all the people that he loves.​

Chapters 1-11:
– Consolidated the entire story so far into a single release.
-Split Chapters 1 into a Prelude and Chapters 1-3. The old Chapter 2 is now numbered as Chapters 4-6. No changes to the story itself were made.
– Added a seventh chapter to the story, with over 150 new renders.
– Added a chapter menu at the start of the story, which will allow people to skip ahead in the story to the chapter of their choice.
– Readers can now choose a different name for the protagonist after starting the story, which occurs before the added option to jump to later chapters.
– Minor changes under the hood to improve performance on low end hardware
-Chapter 11 added
-Changelog for the Chapter 1-12 version:

Date: 3/22/22
The story is now complete.
– The Final Chapters (12) and the Epilogue have been added to the story. Over 500 new pictures, over 4000 lines of new code. 1.25GB for the entire package. Add-on patch for those that downloaded Chapters 1-11 previously is 252MB.
– Typos and such for previous chapters have for the most part now been corrected, but there is no need to re-read the previous chapters unless you’d like to ‘refresh your memory’ r.e. the story.

– It is recommended to not using existing saves, due to the introduction of a new nickname variable at the beginning, which is used in most of the chapters. Use the ‘chapter skip’ feature as this is still a Visual/Kinetic Novel with a linear storyline, not a game.
– Upon starting a new session, you will be asked if you are a new reader. If you’ve read the previous chapters, choose “No”.
– Then you will be asked to choose a name and a nickname. Defaults for these are ‘Brian’ and ‘B’ but choose what you like.
– Once you’ve chosen your name and nickname, you will be asked which chapter you’d like to skip to. This update begins at Chapter 12.

– The ‘Patch’ version is for people that have previously downloaded the Chapter 1-11 version. if you have that, just download the patch. Instructions for installation are in the patch, short form, open up your ANewBeginningCh1-11v1.0-pc folder, and drage/merge the /game folder from the patch .7zip into your ANewBeginning folder, merging /game with /game. You will be asked to overwrite a few files (chapter.rpy files, script.rpy, screens.rpy, options.rpy), this is normal behavior.

– No Android, Mac or Linux versions YET… hopefully the usual folk can help with this.
– Credit to OhWee for Ren’Py coding and editing assistance, and also to JohnnyMonroe, zp560, and DavidCF for their proofreading assistance with various chapters of A New Beginning.