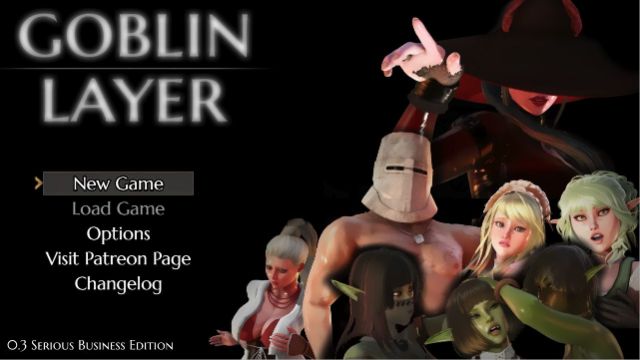 Will our helmet-wearing protagonist ever be able to form normal human relationships with the thirsty townswomen, or will he lose himself to thicc goblin girls?
The first screenshot is a pretty good summary of the story so far​

Bugfix
Removed two fast travel point that shouldn’t have been in the city – forgot to remove them last time.

Bugfixes
Yes, but I forgot to write them down

What’s next?
First of all add in some extra content I didn’t have time to squeeze into this release (wanted it done before the end of the month!).
I will redo one of priestess animations. Adjust the size of some animations… A scene with goblina in the cave needs some renders… Some more scenes & better npcs around the city… and so on. And polish/finetune everything a bit more. Then…
– Hoblina got height issues, but perhaps there’s a solution involving some magical potions?
– Hanging out with the party in town??
– Goblins plotting an attack on a farm???
– House upgrades????
– Baby-making?????
– Multiverse Barrel?

Its a Story Update!

Plot: Church Maided has a quest. The gang travels to Capital City. Goblins in the sewer system? Priestess performs a miracle. Deep lore is revealed.

As you noticed there’s a bunch of buttsex, “butt “not so much story.

I’m saving that for the upcoming story update ->

Plot:
Church Maided has a quest. The gang travels to Capital City. Goblins in the sewer system? Priestess performs a miracle. Deep lore is revealed.

0.36.7 Frontier Conquest II-Edition
——–Art/Story——–
Swamp Witch/Poison Seller with CG
Added some extra CG of Priestess/Anvil/Barrel at the beginnning of the Amazon quest.
A trader from a land far to the south appears… (w CG)
Some homecooked battlebacks (the background during fights)
Updated 2d tileset. Actually I think I did this in a previous version but forgot to mention it.
Added plugin that should make the loading/transistions between CG images smoother.

What’s Next?
0.37.8 will be up in a day or two on patreon… willl likely have some new animation.  .. and after that I’m gonna focusing on the the next story update:
In the Capital, there’s rumors of Goblins beneath the City… Church Maiden has a request for Goblin (S)Layer. (Main Story)
Making the Cottage liveable again.
Frontier Conquest – Secure/Clear areas on the map – occupied by Bandits/Monsters – and make them safe for people to live in. These people will offer new items, services and maybe something more? Kinda like when you clear a settlement in the W*tch*r 3. Except more low-budget.
Romance Cards are all the rage in the Capital at the moment… bet this trend will arrive in the frontier soon.

There were some, but I honestly forgot what it was. I need to write this stuff down the moment I do it.

Adding in some extra CG & polishing, that got left out from 0.36.5 due to time restraints.
In the Capital, there’s rumors of Goblins beneath the City… Church Maiden has a request for Goblin (S)Layer.
Making the Cottage liveable again.
Frontier Conquest – Secure/Clear areas on the map – occupied by Bandits/Monsters – and make them safe for people to live in. These people will offer new items, services and maybe something more? Kinda like when you clear a settlement in the W*tch*r 3. Except more low-budget.
A catgirl?
Romance Cards are all the rage in the Capital at the moment… bet this trend will arrive in the frontier soon.

This update ‘lays’ (get it?) down the foundation for the upcoming story update!

The changelog is a bit long, so get your reading glasses.

Fixed up two animations that had some clipping/light issues. (added these to the previous ver as well)

Remade & upgraded the old CG for Priestess and MC – better light, environment, texture and so on

Testing out some upscaled sprites for combat!

Added option to Edit a bunch of other options, if want to know which options, your only option is to check the game options.

A. Got rid of the old Quest Log plugin – it wasn’t bad, but would likely break your saves whenever I added a new quest – a bit annoying right?

B. Thus: Started building my own homebrewed Quest Log system! It will be more compatible with future updates! It’s not finished yet, added the structure and some placeholder art, will fix it up for the story update.

New skills for some of the party members

Some cutscenes have been made more “cinematic” (cinematic bars)

Behind the scenes optimization and clean-up of the game

Fixed bathgirl CG showing up at the wrong time

Also thanks again to qwertz7654321 the bug fixing hero:

Scenes/Art
Remade multiple animations and CGs for Goblin – better lightning, texture, everything. It should now be more consistent with the rest of the art.
(Priestess/MC CG still needs to updated – I’ll fix it next update)
Added ‘Bust’ CG for Armor Shop girl & General Goods girl.
Updated Goblina’s scenes in cave – was still using old frameworks/methods
Tested AI(?) frame interpolation to make existing animations smoother. Only drawback is a an increase in size.

Gameplay
Battle in intro cave is a bit quicker
Currently rebalancing how the combat works , making it more tactical. Combat is not the main focus of the game, but it’s there so it should be as interesting as possible. Step one is bigger enemy variations and different skills being more/less effective against certain enemies.
Rebalanced the overkill function a bit.
Rewrote the taunts a bit.
Faster resting at Farm girls place

Behind the Scenes
Done a lot of work on the next storyline, new areas, characters (lewd), dialogue, enemies and so on. So the next story should be out this month – February. Plot: Goblin Layer is on the lookout for some new real estate. The gang sets out to deal with a bandit that didn’t skip leg day. An old enemy shows up for a quick visit. As expected, things do not go as expected.

Spent a time on upscaling/updating/upgrading/uplifting/upending my assets. Y’know textures for hairs, skins, clothes and so on. It will pay off in the future.

Also, as you may have noticed (or not) the game uses compressed art at the moment. Gonna have a poll on the patreon later on to see if people wanna go back to uncompressed, or if this is fine.

Gameplay
Changed a some sound effects for a better experience
Added latest bathgirld & blondie scene (armor shop girl) to cheat room
Farm girl’s milking scene accessible slightly earlier than before
Combat – Turn order displayed
Combat – Barrel’s attacks are Area of Effect instead of random now. The targeting is a bit wack at the moment, but I’m gonna fix the hitboxes ’til next time.
Combat – Overkill gold & xp bonus, if doing way more damage than needed to kill an enemy. (usually happens if Goblin Layer finishes them off). Needs some finetuning.

Gameplay
I’m remaking how a bunch of variables and triggers for scenes work. This isn’t really something that’s noticable ingame though. But, If the latest bath girl scene doesn’t trigger, there’s some saves in the game folder you can use.

0.35.9 Pantsu – Edition
Scenes
New Scene with Armor Shop Girl (Blondie)!
Bar Girl got a new haircut/new renders. according to patreon poll and perhaps some bribes. Discovered when testing, that her hair model would cause clipping/trouble during animation. Sadly she is just too thicc for long hair. This is the reason for the change.
Added ‘Bust’ CG for Sorceress, Farm Girl and Church Maiden
Smoother image transitions for some scenes. Something else that is smooth, is my brain. I didn’t realize you could fade in/out images until I made the Xmas Special.

Fixes
Fixed Church Maiden Bust getting stuck on screen (in a bad way)
Very big thanks to qwertz7654321 who fixed pretty much all of the stuff below. Really helps a time-deficient dev out.

— Cheatroom fixes —
Bathg 1&2, CGgirl replaced with their updated scenes (gets rid of missing picture errors)
Fix for Gobelle some scene not playing correctly
Fix for scenes disappearing after you played them
walking on/into walls
dark backgrounds added
Labels disabeled before or enabled after scenes correctly
Fix for NPCs blocking exits/entrace
Fix for getting stuck behind houses
invisible walls
Collition to stuff that should have it like backsite of a bench, trees, waterpump…
Fix for SE chest wrong amount
Little layout change for cheatroom
–Xmas-Event fixes–
Fix for Winterfarmgirl
Fix for wintermaintown west teleport
Fix for Taking the “Winebottle” in santas room
->all of them “broke” the event bc they return the player to the NON-winter village and are fixed
–Worldmap Fixes–
Fix for some collision/shadows on the world map
Walk in goblinetts cave (v2&v3) instead of “click” in

I also remember fixing some other stuff, but I don’t remember what, so it was probaby nothing important.

What’s up
Gonna focus on continuing the main story this month, these kind of updates takes a bit longer than the others, but should be done before end of January, and I’ll probably have time for a small update as well. Maybe two.

—Scenes—
The adventure starts in the Town Hall, there’s a table with some green Xmas shit on it + a candle. Click on that.
Should be a screenshot in the game folder showing it. Unless I forgot.

It’s the end of the year and Goblin Layer is more broke than ever.
The gang sets out on a winter adventure to the far North, where something just ain’t right.

Edited the ‘bust’ art for Gobelyne, there was a seam at the bottom of the screen

Added Speech/Expression bubbles during in Cave

Edited some dialogue options for Goblinette

Added mead and stuff that can be bought in the Inn

Fixed name labels showing up during scene in Cheat room

Fixed Rooftop chest outside 3rd dungeon not being accessible

Remaking how I use variables to trigger scenes and shit, to a slightly less stupid system. Not really something you will notice in-game, but its necessary making more complicated quests involving more characters. It will also make it easier for me to implement a chapter select feature


We disable comments to the public due to high volume of traffic and spam comments, Commenting is only available for VIP members.
4 1 vote
Total Game Rating
Subscribe
Please login to comment
5 Comments
Newest
Oldest Most Voted
Inline Feedbacks
View all comments

Save not working ,and its lag asf when you entering the church