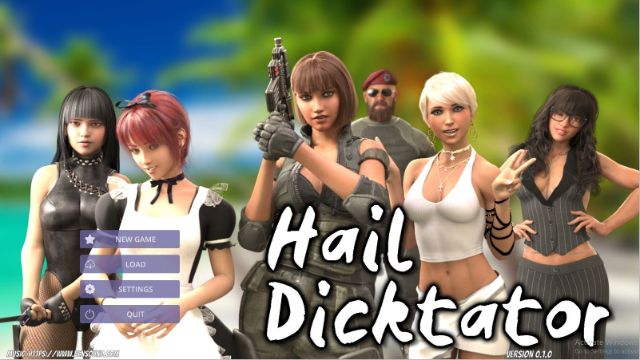 Hail Dicktator APK Android Port – Down on your luck, you suddenly receive a letter from an uncle you never knew you had. He offers you a job to manage his tropical island resort. You find it’s full of beautiful women and a strange culture of punishment and reward. But perhaps the island itself is even stranger than the people that inhabit it…

Build friendships and fall in love with the girls. Punish or reward them. Follow their stories. Explore the secrets of the island, upgrade the hotel, build more facilities. Maybe one day, you will become the new ‘Dicktator’!

‘Hail Dicktator’ features fetishes of all kinds already available in the game, including bondage, spanking and feet.​

*For Android Users: Because of the 2GB app limit, chapter 1 is from start to the Paris mission. Chapter 2 contains all new content from there. If you played the game until the Paris mission, you only need to download chapter 2. PC/Mac/Linux versions are still the complete game in one.

v0.39.2
* Hotfix: Hazel’s portraits were showing when Anna was speaking
* Sarah’s quest had no visibility setting, and was visible too soon

v0.37.1
Unfortunately, due to the limit of 2GB of apps on android, I’m forced to split the app into APK and OBB file. To install, you will have to place the “main.1.com.HachiGames.HailDicktator.obb” file into the “Android\obb\com.HachiGames.HailDicktator\” folder (create the hail dicktator subfolder if it doesn’t exist). Then, the apk can be installed as normal.
I will split up the game for mobile in the next update, so that it will go back to just one file per update.

v0.33.2
* almost 300 new renders. Close to 400 with animations
* including 2 full animations and a set of 10 mini animations
* ~19 new/updated scenes/events
* Lewd content for: Sarah, Yuki, Jeanne, Scarlet, Nadia, Leah, Daisy and Zero
* Stories of several girls continues, including some first-times and reveals
* Featuring a ton of bondage, as well as vanilla sex, analplay, chastity belt, yoke and feet content.
* Animated sex as well as bondage/feet/spanking animations
* Auto-Translations updated
* some fixes for typos and errors for quests of previous versions
* optimized screen transitions to reuse objects, heavily reducing screen transition load
* fixed crash when playing in some languages due to text animation being unable to handle input
* added flag for auto-translation so changed scenes can be forced to be overwritten (should fix issues with other languages in the punish/reward quests)
* fixed an issue in translation-mode that would cause crashe or freeze or not start some quests
* optimized translation-mode main panel to load much faster

v0.32.2
* Fixed Mac build not working. It should also now look at the old location for save games.
* Removed lag from opening/closing the quest panel

v0.21.2
* 200+ new renders
* 20+ new scenes/events
* Two new map events (one repeatable)
* 5 new animations
* New Hjs and Bj scenes with Leah, Hazel & Sarah
* New sex scene with Alice
* New bondage and spanking scene with Scarlet plus repeatable map event
* New Strap-on scene
* New humiliation punishment with Daisy
* Main story continued
* Several side stories continued
* Current main arc climax starting
* Can now rename MC (in settings)
* Saves will display version and completion (only works for saves created from this version on)
* Provided google translate language files for: German, French, Japanese, Chinese (simplified), Russian, and Spanish. Some of the languages already have active translators (German, Polish). I don’t encourage people to play with the google translate translations, since the translation is pretty bad. However, it serves as a good entry point for translators, and since it’s unlikely to be translated into some of these languages anytime soon, it’s at least something.

v0.20.3
* Hotfix for white screen in the side room when Daisy should be there. My render verification system has failed me . I’ll improve it to make absolutely sure this doesn’t happen anymore.

v0.18.4
* fixed crash in side room when Daisy is there
* fixed possible softlock where Daisy could be freed without doing the quest, making the quest impossible to complete (thanks to the crash, nobody should be affected by this)

v0.15.2
* added dialog scenes to current and past to reflect current state of things for some characters (Sarah, Scarlet, Daisy)
* fixed deadlock issue not being able to use the side room with the chastity quest
* added missing scene to gallery
* fixed some typos
* compressed versions
* mac/linux/android versions

v0.13.8 (hotfix)
* fixed gallery not working as intended
* fixed two early quests not showing up in the tracker, making it difficult to progress (will be fixed for existing save games)

v0.10.2
* 220+ new renders
* 25+ scenes and events
* Climax of on-going arc with Sarah
* More sex and spanking scenes with Hazel and her Mom
* A new bondage scene with Alice
* A new sex scene with Sonya
* A new bondage scene with Yuki
* A sexy dream
* Exit button in session should no longer wander off screen
* Save/Load/Settings bar should be more visible now
* Made quit button more visible
* Added text bar in hotel management panel to easier enter cheats on mobile
* Fixed Massage scene
* Several text fixes
* Fixed sequence break bug with being able to start Sarah’s quest too soon (problem will resolve automatically for people that ran into it)

v0.9
* 200+ new renders
* 25+ new events and scenes, most rendered
* start of a big main quest
* side quests with other girls
* can now do full service check with hazel
* can now call Alice to the kitchen (as long as she is not busy).
* can send Yuki away from the kitchen if you need some private time with Alice.
* some more general dialog for some situations
* fixed memory leak by force cleaning up unloaded assets (not confirmed, but should be working)
* framerate now adapts to the current refresh rate set from the resolution setting

v0.8
* 280+ new renders
* 35+ new scenes and events
* two interactive scenes with multiple endings
* introduced an all new girl for the main cast
* Daisy’s story started
* Main story continued involving Leah, Daisy and Scarlet
* Yuki’s story continued
* side events for Sarah & Sonya involving all the other girls
* added more dialog events for girls in the sauna and the bar (thanks to ThL)

v0.7.3
* Sessions have been fixed by implementing chunked loading and optimizing mobile texture compression
* 30+ new events
* 250+ new scene renders
* All new shop interface
* Can now sleep at any time to skip a day
* New side character with events
* Slight overhaul of the quest panel (colors and visibility triggers)
* Addition of timed events (events that will have impact on a girl’s activity in the map)
* Timed event with Sarah
* Can now call Sonya to the bank
* Can now call Sonya to the electronics store
* Can now call Scarlet to the clothing store
* Continuation of KNL story line (Hazel + Yuki)
* Events with Hazel’s mom
* New workout event with Leah
* Main story line advanced
* Scarlet’s & story line continued
* Sarah’s story line continued

v0.6.3
* Fixed Hazel’s service quest to not appear before the quest is actually doable.

v0.4.2
* Fixed Scarlet’s quest falsely updating Narrator’s love limit instead of her’s (if you already completed the quest the right value will update retroactively for you when you load your save the next version 0.5)
* Cut down memory usage by only loading the session resources when they are being used. (This will be further improved in 0.5 to drastically cut down overall RAM and VRAM usage, so that it will always stay constant in future versions.)
WARNING for Android users: 0.4.2 might still use a bit too much memory for some Android devices when entering Sonya’s session, so it could crash. Be sure to make a save before that to not lose any of your progress.

v0.3.3
* fixed crash when rolling back while Hazel is tied up
* fixed Alice’s dialog about abilities being available way too soon
* added hint in Yuki’s teaching event to better indicate when and where it happens

v0.3.2
* Android version release (should work out of the box)
* 30 New Scenes (20 of which are fully rendered)
* 250 new renders
* includes first full sex scene
* includes first deep throat scene
* included the poll winner for Scarlet’s casual outfit
* more punishments and rewards for the hotel employees
* fixed 2 events giving stats to the wrong person
* option to stop the scrolling animation on text boxes when MC is thinking
* Alice now reacts slightly different when peeking at her in the shower if her exhibitionism is high enough
* new scene logic/trigger functionality
* event actions to move a character to a location (will be expanded upon in further updates)
* fixes for Scarlet’s matte renders (black pixels) and pixelation from other girls in some location.
* switched default mouse wheel for rollback/rollforward, and added option to invert in the settings
* fixed Sonya’s Maintenance check being available before she starts to work for the hotel
* Alice’s and Sonya’s sexual rewards now require minimum stats
* moved sexual rewards and punishments into a separate category
* added option to enable on-screen buttons for skip and rollback (enabled by default on android, otherwise disabled by default)
* small optimizations for resource loading pipeline

v0.2.3
* 30 new events and scenes. Half of which are fully rendered scenes. Includes some bigger fetish scenes (feet/spanking/bondage/dildo)
* introducing 2 new girls
* new location
* over 250 new renders
* changed girls stat gains to be less grindy
* updated hotel management mechanic with a punish/reward. You can now observe the girls and punish/reward them.
* new gag mechanic for Yuki (might come for other girls later)
* expanded quest system for more complex event triggering
* fixed render mistakes of some of previous Version’s scenes
* added girldar (portrait displayed on location buttons)
* fixed spelling and grammar mistakes. (Special thanks to my Patreons as well as somebodynobody and other members on the f95zone forum for the help).

George and the Medical Degree v0.0.8