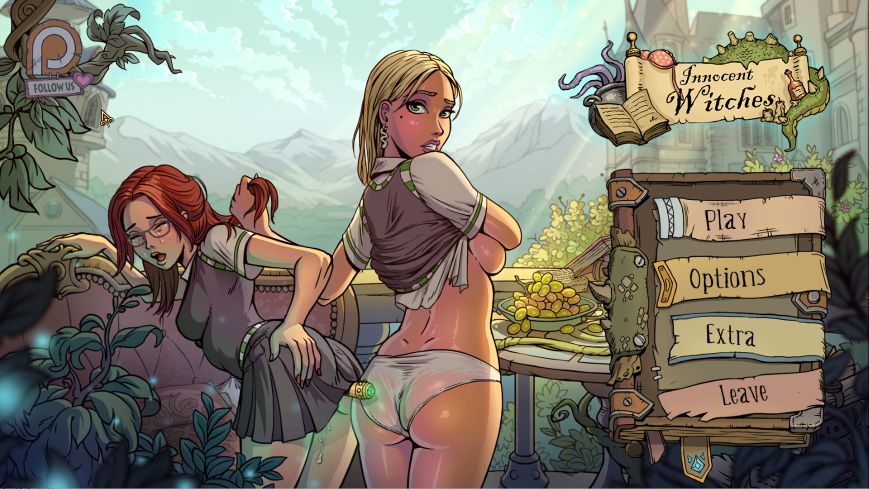 Amazing and at the same time, a strange story was told to me by an old acquaintance by correspondence. He told me of the time when he was nothing but a simple guy, yearning for a young female flesh. But due to the thunderstorm of events, in which he was cast, he found himself at a disastrous end. His birth was shrouded in mystery, and his goals were that of a simple man. His youth could be the envy of all. But to live through his destiny and bear the entirety of it, is even beyond my power. He will recite you a tale about the students who changed his life. And many women who he met, and how they have changed his fate. We are about to take an endeavor into a magical world, that has not seen a wild debauchery since the fall of the Bewitching Guild. The old magical school, that above all valued purity and chastity. And we also hear about a young doctor, who grew tired of old witches, and who dreamed of young and innocent witches… It is time to raise our sails! On-wards to Hogwarts!​

0.10A – 08.10.2022
0. All the fixes and adjustments that were added in 0.9.2B are also present in 0.10A
1. Chapter 4 in Act 1 was updated and integrated into the new story
2. Swimsuits quest in updated chapter was remade and remastered
3. Added 6 new locations – Faculty Entrances, Abandoned toilet and Prefects Bathroom
4. Added a fullscreen scene with a new side character
5. Added Live2D animation for Luna’s bedrooms scene (available in old plot and as a memory for now)
6. Carefully ported the most popular bugs from Python 2 version of the game to Python 3

v0.9 Beta
Expanded chapter 2 in act 2 with new side content
Added a new side quest with multiple sub-quests
Added three fullscreen events, two with main girls, one with a side character
Added Live2D animation for a certain scene at night near the lake
Removed consequent skip cap when sleeping without any activities
Added several costumes and other items to the dressing rooms
Added an ability to activate community translations (more on that @ our website)
Adjusted continue button functionality during scenes to be more player friendly
Numerous corrections and adjustments based on player feedback and reports (thanks!)
Long-awaited bugs were finally added to the game

v0.9A
0. All changes and fixes introduced in 0.8.3-beta update are also included in this version
1. Added a continuation to the new story – chapter 2 in act 2
2. Added two new fullscreen scenes (available in new chapter)
3. Added a new location – Hagrid’s Hut
4. Added 6 collectable photos. Get them all! (available in new chapter)
5. Added 3 new costumes for Sonya
6. Outdated bugs were successfully updated
Full list of changes can be found in changelog.txt file, or in the Extra section in the game itself.

v0.8.2 Beta
0. Saves from 0.8.1-beta are compatible with this version
1. Enhanced Live2D animation engine to support more seamless transitions between movements
2. Fixed existing inconsistencies in Live2D engine to reduce flickering during scenes
3. Added “Sandbox” mode to Hermione’s “Book of Runes” Live2D scene (available in the memories)
4. A bunch of cosmetic UI fixes and additions for different in-game mechanics
5. A couple of bug fixes across the game
6. Shown the new coder how to efficiently add game-breaking bugs

0.8 Alpha
1. Adjusted the story in the prologue and act 1 chapters up to chapter 3
2. Added a fullscreen scene in chapter 3
3. Added several spicy side quests available in chapter 2 and 3
4. Added a teaser for one of the new characters
5. Added a new system for buying and selling items (it will be actively used in future chapter 4 and 5)
6. Added a scene involving two Slytherin girls in act 2 chapter 1 (new plot)
7. Added two new music tracks
8. A number of polishing and QA adjustments and fixes based on your feedback <3
9. This version includes all the additions and fixes from 0.7.2-beta
10. We heard you like bugs, so we put more bugs in our bugs so you can enjoy bugs while playing with bugs

v0.7 Beta
0. (Most of the new content is available in the new story)
1. Added four side quests with juicy rewards
2. Added a fullscreen scene with one of the main girls
3. Added new uniform for the main girls
4. Restored unofficial meetings with main girls
5. Added random encounters in the corridor
6. Added new minions in bedrooms for the last stage of the main quest
7. Updated x-ray acquisition and functionality in new plot
8. Slightly updated the new plot scene with Minerva
9. Added 7 new music tracks
10. Fixed a number of annoying bugs (thanks for the reports!)
11. Added a number of QoL improvements
12. Added new bugs in accordance with multiple requests

v0.7.0 Alpha
1. Added the first chapter of the updated plot
2. Integrated Live2D Susan’s scene into the game (no need for additional animations file anymore)
3. Integrated Live2D animations in the showers into the game
4. Added alternative scene with Minerva
5. Partly updated Helena’s and Minerva’s idles
6. Added a bunch of new and updated sexy minions
7. Added several new locations
8. Added three plot-related interactive events
9. Introduced several new characters for future events
10. Reworked and updated some of the core game’s mechanics based on the feedback
11. Added three new music tracks
12. Updated preferences screen to make it more user-friendly
13. Updated saving system and added new ESC menu
14. Updated interfaces throughout the game
15. A bunch of other fixes and adjustments based on the feedback
16. Bugs

v0.6.5F
1. Fixed animations being stuck in certain situations (special thanks to those who helped with the debug)
2. Fixed an exception with transferring persistent data from a very old version
3. Fixed several notification and goals issues
4. Other minor fixes and adjustments

v0.6.2 Final
1. Hermione’s background animation in main menu was updated to Live2D
2. Fixed errors with saving/transferring game progress
3. Fixed a bug caused by sending letters to multiple recipients
4. A bunch of fixes and adjustments based on the players’ feedback (Thanks!)
5. Updated old bugs and added several new ones

v0.6.1 Final
1. Fixed the Book of Runes event
2. Fixed incorrect/missing translations
3. Fixed the Wheel of Fortune (WoF) event
4. Added slightly different endings for the WoF event based on the difficulty
5. Random bedroom encounters should be reachable now
6. Further updated the drinking minigame interface
7. Fixed Xandria interactions in Act 2 Chapter 2
8. Adjusted the difficulty/time-to-finish of some of the minigames
9. Added the option to use old music from the previous versions
10. Fixed problems with saving/transferring the progress
11. Other fixes and adjustments
12. New bugs

v0.6 BETA
1. Made it possible to transfer some of the progress between versions (includes memories, Sonya, achievements, dressing rooms, as well as game preferences and screenshots). This functionality should work starting from this version.
2. Added introductory dating scenes with main girls.
3. Added bonus shower scenes for Daphne and Luna.
4. Sonya and achievements are now global and their progress is shared between different playthroughs.
5. A ton of fixes of numerous bugs throughout the whole game.
6. A new interactive statue mini-game was added to Act 1 Chapter 3.
7. Added proper hinting arrows to the early chapters of Act 1.
8. Reworked and updated Hagrid interactions in Act 2.
9. Act 2 Chapter 1 has different flow of events now.
10. Many events in Act 2 Chapter 1 were polished or changed.
11. Act 2 Chapter 1 can be finished now.
12. The quest journal received an additional hinting functionality.
13. The quest journal received a cosmetic overhaul.
14. Numerous hints were added to the quests throughout the game via hinting in the quest journal.
15. Added a warning message to the events that are not yet finished.
16. The message about new version of the game should now work correctly.

0.5A
1.Added new manipulation abilities (both dark and light).
2.Added plot, ability to wear diadem.
3.Added lock mechanism (requirement for sex scenes).
4.Added new scene with a main girl!
5.Many requirements for said scene.
6.Redesigned the screen that pops up when error happens to be more user-friendly.
7.Added a way to get more memory fragments for Sonya (can be accessed via her menu).
8.Added early stages of tutoring, light path is fleshed out partially, for 1 girl.
9.Dark path is not complete yet.
10.Added memories, you can replay scenes (around 80% of them at the moment). Some of them have additional bonus content.
11.Added poses for manipulation scenes for future releases.
12.Increased the amount of galleons which Marcus can get (advance the plot to unlock this).
13.Fixed bugs.
14.Added bugs.
15.Started working on the next scene with one of the main girls!

0.5B
1. Act 2 begins! (there are several additions in act 1 chapter 5 as well)
2. New scene with main girl (these scenes are on light path for now)
3. Dark path can now allow you to suspend Hermione and Daphne as well
4. Drinking scene bonus for Hermione and Daphne added
5. Art added for Hermione and Susan interactions with Markus tutoring
6. Added Christmas decorations for Marcus’ office! (better late than never)
7. Updated idles for Nola and Ginny
8. Ginny’s scene was updated
9. Changing room added (WIP, only Daphne is partially added at the moment)
10. New commissar scenes with all girls
11. New random interactions with portraits (WIP, may be broken in pre-release)
12. Dark path continues up to our next minigame which is still WIP (sorry)
13. Memories were added for all girls
14. Changes to Daphne Bathwater event
15. Many quality of life improvements and additions
16. Fixed a multitude of bugs
17. Added new bugs

We have spent a great deal of time revamping the game and without further ado:

Complete edit of chapters through chapter 4, text and flow

Added hinting arrow system that guides you through clicking, only works up to chapter 2

Added ambient sounds, that happen when you open the window or doors, or change location

Added test functionality of minigame with Hermione (not yet complete)

Added spying on girls prior to dating scene in chapter 4

Swimsuit quest is simpler and easy to follow, ripped out a lot of redundant text from chapter 4 (We apologize this sucked up a lot of development time but has been the biggest complaint)

Added sound functions to support random sounds (not in use atm)

Built scripts to swap out translations as we will be redoing the engine completely in the future, so we had to do this to support it

And last, but not least, a new scene with one of the girls, finish Act2 Chapter goals, and you will see the steps required for it in your goals, once you are on the right track.

Things that didn’t quite make it:
Minigames with Luna, Daphne and a special minigame for Chapter 3

Side dating scenes for Act 2

About the new scene:

We now have movement continue while text is displayed, this is a custom module we made for Innocent Witches and is not standard renpy behaviour

Due to this, we have added intro sounds, that have loops queuing after, which then play while the animation is happening, once the player continues, the outro music is queued, this makes it so the sound is seamless, regardless of how fast you play through the scene.

This also means, you might get annoyed by some of the loops and sound volumes, please remember you can adjust them to your taste.  We had many discussions and debates about sounds and music and the fact is, it’s not easy to reach a consensus when people’s tastes are different.  So if you hate the music, and want a poll about it, ask in Discord.

We disable comments to the public due to high volume of traffic and spam comments, Commenting is only available for VIP members.
0 0 votes
Total Game Rating
Subscribe
Please login to comment
7 Comments
Newest
Oldest Most Voted
Inline Feedbacks
View all comments

It’s sad that this does not have a compressed version.

I hav same problem

works fine on me, or try to use vpn