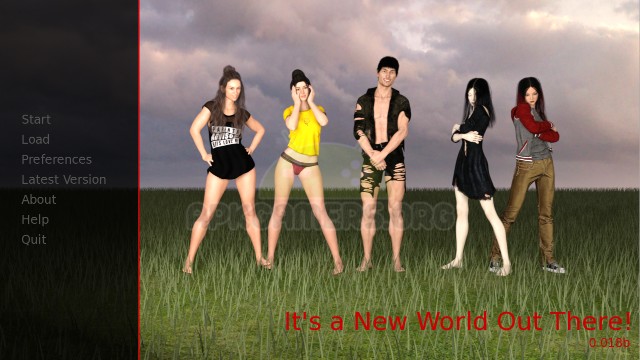 Its a New World Out There APK v0.33 Android Adult Game Download

When the zombie invasion began, no one took it seriously. Including you. Until an outbreak occurred in the town next to your own. As a teenage boy with no parents, you were guided to safety by your older sister, Mary. Yourself, Mary, and your adoring little sister, Valerie, have spent the last 3 years in the cramped bunker that your paranoid father built and stocked with supplies. However, supplies are running out. As the ‘man of the house,’ it is up to you to venture out into the lifeless, post-apocalyptic city (now under quarantine by the army) to find food and supplies to sustain your family. And, of course, if there happens to be any cute girls out there …

v0.1
-830 pictures
-98,785 words
-2 new animated scenes
-2 Endings
-1 route done
-12 ways to die
-Fixed a lot of grammatical mistakes. Probably missed like a million more…
-Changed the relationship with Val and Mary. Now they are the main character’s step-sisters by marriage. I hope this makes the game compliant with the rules of Patreon.
-Second meetings with Violet and Layla scenes.
-Tease scene with Val in the shower. She will tease you more, or less, depending on what you did while she spied on you.
-Bj Scene with Val in a school dream caused by Hiehie.
-Bj/Fuck/Creampie scene with Hiehie.
2 new characters.
2 Endings (Secret route.)
A bunch of new bad ends.
New Sound effects, New music. Changed the music from the intro scenes of meeting the ‘neighbors’.

v0.23
1,136 pictures
120,007 words
2 new animated scenes for a total of 4
No new endings, for a total of 2
No new route, for a total of 1 route done
1 new way to die, for a total of 13 ways to die
2 new scenes with Val. One at home, one out. Depending on if you saw her showering or not. In one she teases you, in the other she gives you a Hj/bj depending on lust.
1 new short scene with Eliza in which she get’s mad. This is to set the situation for future updates.
1 new scene with Hiehie. You get your second power, although she doesn’t explain what it is, you get to use it in another scene of this update. Can you guess how it works?
Layla’s second event. You get to see a little of her past story, depending on your past choices you get your first trust point with her, and also it opens a side scene on Mack’s second event.
Mack second event. This time you get no upgrades, but you get to know Mack a little better… before you are interrupted.
Scene ends differently if you have seen Layla’s second event. This side scene will split Layla’s path in future events.
Fixed some random bugs and variable errors, still it should work with old saves since I didn’t add any new variables. Let me know if it doesn’t.
Since I’m having so much trouble updating, I made sure to check and recheck the game three times this time. I hope there aren’t any huge bugs, but if you find anything tell me about it and I will fix them as soon as possible.

Download files for It's a New World Out There

The Bugs Is When I Put My Name In The Game…. And It’s Was Success… But The Keyboard Is Cannot Push “Enter”…. And The Keyboard Cannot Dissapear… Please Fix It…. Because I Was Interesting Of This Game…Thanx

try to use google keyboard

Downfall: A Story Of Corruption v0.09