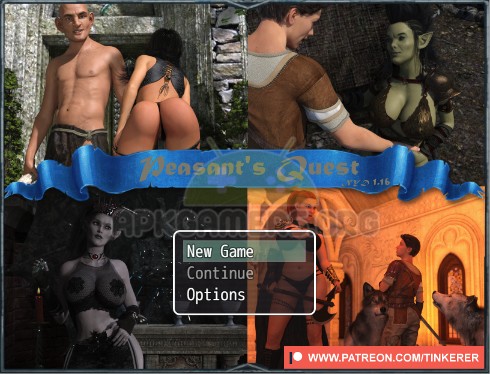 Peasants Quest APK Android Port – is set in a medieval fantasy world, where you play a young farm boy out to seek adventure, and perhaps meet a few hot damsels in distress along the way.​

v2.91
– 8 new quests (1 more than in the test build)
– 7 new scenes + variations, no less than 48 unique animations.
– A new shop in Greyport (still with a very limited selection)
– New maps + 1 refurbished map (the one near the tower)
– New items to craft (perfume and one armor type).
– New Magic book index
– Several other minor improvements and bugfixes

Compendium/magical book containing some useful stats for each girl in the game. This can be acquired by performing a quest. Speak to the innkeeper, exit tavern and re-enter to trigger quest. The compendium is still a work in progress, the index is temporary and currently lists every girl in the game, even though you may not have met them yet. An improved index will be implemented in a later update (probably 2.91).

Extended storyline for the goblins. 4 new quests resulting in a new female. The first quest triggers once you have completed the quest “A Rebellious Tribe” (where you got the Sequoia, the pygmy goblin), and your population is greater than 60.

Added a spirit potion point by the well for Liandra’s old scenes.

A whole lot of bug fixes this time around, mostly thanks to one particular member of the Discord community. And I’m still only halfway through his list…..

v2.72
Not much has been added since 2.71, this build mostly just adds some minor improvements and fixes a bunch of bugs. There is only a small amount of new content for Mia, Liandra and Luthien:

Mia’s sex in bed scene now also has a non-pregnant version and both versions now come with animations.

As usual old save files should be compatible. Just transfer your old “save” folder. Walkthrough should be in the game folder.

Lite version
This version is for those who already have version 2.61 and want a reduced download package. The lite version contains the “core” game and all new animation files and images. But you will need to add the older animations and images from version 2.61 manually. Copy the contents from the “movies” and “pictures” folder from 2.61 to 2.71. DO NOT OVERWRITE if asked. If you are unsure how to do this, download the full version.

– Added animations for an existing scene for Vixenatrix, Sequoia and Maghda.

– About a dozen new quests related to Oksana and the farm (see walkthrough for details).

– New means of production at the farm(chickens for eggs, chop wood).

– Added pregnant version for one of Oksana’s existing scenes

– Fixed a whole bunch of bugs, which I again didn’t bother writing down, and have mostly forgotten.

– added animations for existing scenes for Hilde, Shakala and Shakala’s daughter. One scene each.

– Luthien and Liandra can have up to 10 children each.

– Sequoia will now randomly appear in the valley near the exit to the pygmy camp if you didn’t find her in camp during the raid.

– a bunch of other minor fixes and improvements

– Added pregnant versions/combinations of the “Ring a Bell” scene

– One new scene for Ziva (both pregnant and non-pregnant versions)

– One new scene for Caleah (both pregnant and non-pregnant versions)

– Ziva and Caleah can now give birth (capped at 10 children)

– 2 new quests for the temple. They are triggered one day after Ziva discovers she is pregnant.

– Added quest notifications for all quests (old and new)

– Other minor bugfixes and improvements.

v2.41
– Approximately 400 new images
– 52 new animations
– 3 new sex scenes for the familiar (several variants of each)
– New scenes for Ziva, Alice and Caleah at the temple of Qetesh
– Alternate version of the temple initiation scene. You can now do it without Grug, if you wish.
– New quests for the familiar. It will now grow up and evolve. It/she can now have an unlimited amount of children as well.
– Alice can now give birth to multiple children (capped at 6).
– Caleah and Ziva now get pregnant and have pregnant scenes.
– Added some new map/floor sections
– you can now rename the familiar at your desk
– minor fixes and improvements

We disable comments to the public due to high volume of traffic and spam comments, Commenting is only available for VIP members.
5 1 vote
Total Game Rating
Subscribe
Please login to comment
6 Comments
Newest
Oldest Most Voted
Inline Feedbacks
View all comments

How to use cheats for money in android

your chrome browser was updated, uninstall or disable or use outdated chrome to fix

Any update about of these games – Raptus, a mother’s love? Enslaver Darkpath