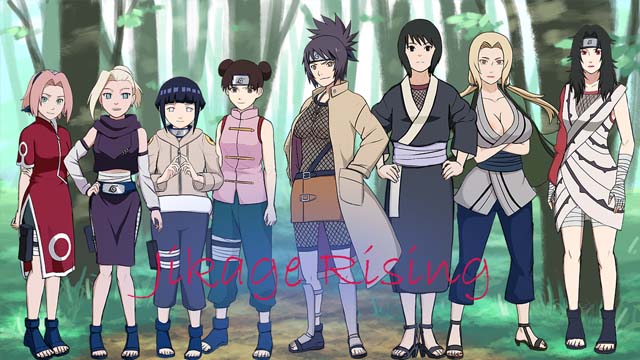 Jikage Rising APK Android Port – Never having achieved much in Konoha, you suddenly find yourself back to the past. With the help of the mysterious Saru, you unlocked the power of your clan and gained the ability to turn others into your followers. You will have have to track down and indoctrinate key kunoichi that will be useful in your quest to revive your clan.​

In arc 1
You will need to gain complete control over Sakura, Ino, Tenten and Hinata. You will need to gain their trust to find openings to use the jutsu on them and turn them into your loyal thralls. You will then use their abilities and connections to ultimately control Tsunade and use her power to further your agenda.

Arc 2
It has been a few years after you made Tsunade your loyal servant, you have improved upon your technique and now look towards gaining the support of other villages to start your own. This time, your targets will be the various girls from the other villages…

Arc 3
Will be disclosed in the future

v1.18b Public
-Kurotsuchi added
-Some UI updated
-A scene for Kurotsuchi
-Event for Kurotsuchi
-Adding in animation for Tenten x Mabui scene
-Ability to recruit Ino to join battles not added yet due to art not being done
-Added ability to check girl’s stats in training menu in the Hokage building
-Some other minor stuff that I probably forgot

v1.16
-New scene for Mabui
-Progress for Karin
-Added in the ability to recruit Sakura and Hinata
-Added in the chance to gain stats when completing missions for the MC
-Added in option to train the stats of the girls in the Hokage Building
-Minor UI updates/ improvements
-Added in some minor dialogue for Karin
-Will add in missing scene for Mabui when I get back on Monday

v1.15c
-Karin introduction
-Mabui intro event
-Mabui BJ scene
-Mabui wohoo scene
Also realised that we probably added the most art for this update so far some reason, mostly cause we have some “cutscenes” for non-sexytime stuff as well now. Let me know if you guys prefer to have stuff like this or if y’all just purely want sexy stuff yeah!

On the side of bad news, there was some changes done to the mission system and we kinda broke it for now, it’s not gonna be permanently broken, the coder is trying to fix it now and it’ll pretty much be a plug and play thing, I’ll update the game once he sends me the updated mission system and Temari should be ready to be leveled up!