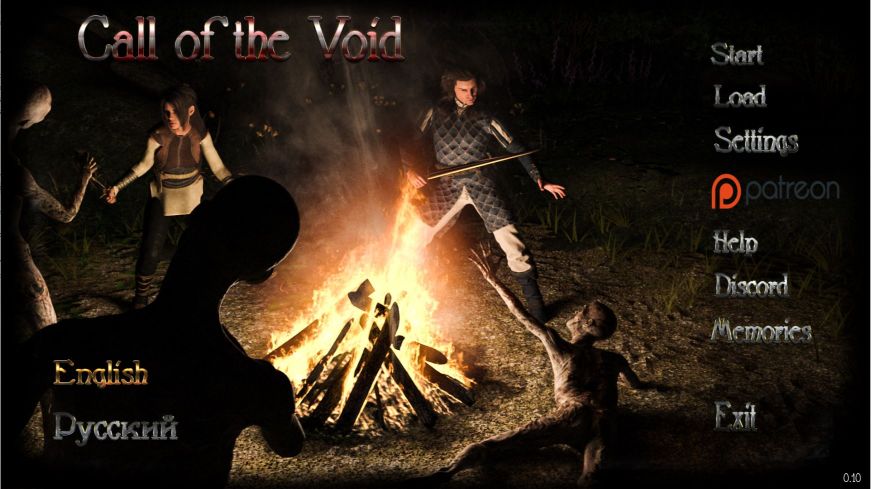 Voids Calling APK Android Port – is a sandbox game where every decision you make can drastically change the course of game’s story. Skills we’ve acquired while working on the first game will be utilized to the fullest while working on this project. The game will still be heavily story-oriented, however, this time you are free to choose what to do in the game’s world. As for the render’s quality, I think you’ve noticed the gradual improvement in quality over the period of work from the last project and I keep learning new stuff. Talking about sex scenes, you can expect the same quality if not even better than in my first project. “Call of the Void” is a redesign of our ideas. A new project with the same old approach to our work and style.
Formerly named Call of the Void

v0.253 Special
That event will contain 160 renders, 8 animations (including complex ones) and around 4.5k words.

It’s finally here. We’ve released the second update for the second episode of our game. It was a long road of trial and error but we did it. We’re truly happy that we can share it with you now.

– The special event for 40$+ patrons will be released later on as a standalone addition.
– The final quest is not where it should be. As we keep adding new content, it will be moved to better reflect the proper position.
– We did not have time to test import of saves, we hope you can help us with that. Those of you, who do not have saves, can use «quick start» option.
– The combat system is partially ready but it still requires some tweaking. We have disabled this feature for this version of the game.

1) First of all, this episode adds about 34k of words. The update turned out big even though it was not our intention for various reasons. The game has 53,947 words in it. It is almost half the size of the first episode.
2) Secondly, we have made 1234 static renders and 11 animations. There is one animation consisting of 200 frames. There is also one animation with 300 frames, but it is not ready yet, it will be in the public release.
3) One of the final quests of this episode is finished. It just happened, it was a simple side quest at first, focused on one character, however, it grew into something bigger over time.

– We have not included all completed quests in this build. Some of them will be added later on
– There are a lot of dead ends in this update. Some of the options you choose will lead to the end of the game simply because we have not finished those branches. If you accidentally choose such an option, please, load the latest autosave.

Ep.2 v0.01
22.3k words and 915 renders are ready for the next update.
1) This is an early access with all “bonuses” that usually come with it. Technical side of the second episode isn’t finished. Export of saves, battle system and interface elements will be added later on. English will keep being worked on as well.
2) This update is an introduction (a prologue) to the second episode of our game. Mechanically, this update is closer to a linear VN. By the end of the prologue, you’ll return to the open world.
3) This update is shown for demonstration purposes only, and in order to thank our patrons for their support.

v0.6.03
Changed the name.
The update has more than 518 renders (approximately), 22756 words. Additionally, 11 scenes have animation.
Main content:
Big update for Kagera’s storyline
Update for Kilena
Small event with Elana
New events from the «message board»
Update for the “night guest”
New interaction with Mrysia
Events for higher-level hero
New festival interactions
Big redesign for the bathhouse
New interactions in the tavern
New dreams
A big number of random events
New options in the brothel
Some improvements for the castle
A lot of smaller adjustments
Saves from previous versions:
Saves from 0.2 version – errors are guaranteed and you will most likely not see any new content.
Saves from 0.3 version – errors should be minimal. You might miss some minor events, but nothing serious.
We recommend using the saves we will provide you with. You will get 2 saves (one for English version, one for Russian version), both on normal difficulty and with content from previous versions done, so that you can jump right into new scenes.

We disable comments to the public due to high volume of traffic and spam comments, Commenting is only available for VIP members.
5 2 votes
Total Game Rating
Subscribe
Please login to comment
5 Comments
Newest
Oldest Most Voted
Inline Feedbacks
View all comments

Beatrice in the Crush v1.0