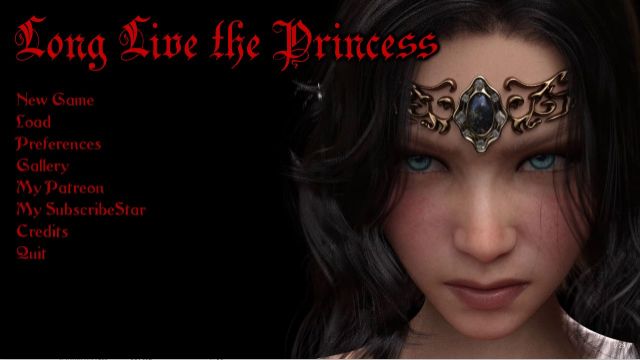 You live a simple life in a small fantasy town. You possess few talents except that of Truthsaying, the ability to magically tell if someone is lying.
One day news arrives that the King is dead of old age and that his daughter, Princess Selena, is coming to your town for her coronation. When a person close to you gets murdered soon after, and you learn that you are the only person who can save the world from an unspecified calamity, things get rather heated.
Serving under a powerful sorceress, you are taught the ability to manipulate people’s minds. With this knowledge in hand and a potty-mouthed pixie in tow, you are told to prepare for the arrival of the Princess so that you can seduce her and save the world (the details of this elude you). Until then, however, you must practice. How appealing, then, that this practice means using your magic to seduce as many of the town’s girls as possible.
Life is about to become… satisfying.

v0.38.0
The night scenes for all the girls who have them (Evelyn, Primrose, Callie, Samarra, and Nell) are now fully implemented.
Updated all four existing night scenes to keep them in line with the rest of the game. Every image has been re-rendered, and every animation has been expanded and improved.
Added the Deep Sleep spell.
Implemented Perversity 6, which works differently from all other ability scores.
Removed Courage levels 5 and 6 from the game. They were no longer needed. This means all abilities are now fully implemented.
Expanded several epilogues to take the new possibilities from this update into account.
Completely revamped lighting in the Samarra/Nell night scene. Additionally, Nell’s skin texture was fixed in this scene.
Removed the ability to leave behind evidence at night. This early feature no longer fit the game’s theme and would have been very demanding to implement.
Various tweaks and fixes.

v0.36.0
– Added three new scenes with Callie featuring two new, mutually exclusive relationship branches to explore.
– Expanded the epilogue with more outcomes for players who pursue Callie’s new scenes.
– Callie is now romanceable and is another potential source of charisma.
– Updated dialogues to reflect changes to your relationship with Callie.
– Moved Evelyn’s charisma gain. It is no longer necessary to enter a relationship with her to gain charisma.
– Various tweaks and fixes.

v0.32.0p
Added a hotfix for those having trouble triggering one of the new sex scenes.
Re-uploaded with a different Evelyn story to comply with Patreon rules.

v0.31.0 Endgame Part 1
The endgame begins: Added the events of the entire day before the coronation.
[*]Two new sex scenes.
[*]Official Android support with an improved interface and language for touch screens.
[*]Significant animation improvements to multiple older scenes.
[*]Added penis wetness to both new and existing scenes.
[*]Improved Callie’s dialogue scenes with new renders and more expressions.
[*]Standardized the capitalization of titles and professions throughout the game.
[*]Various tweaks and fixes.

v0.30.0
You can now cast Probe Memory on a certain princess.
[*]Rebuilt the sex scene with Callie’s customer to feature a new costume, lighting, and massively improved animation.
[*]Removed the Multiple Girls page from the scene gallery and moved its scenes to the respective girls’ pages.
[*]Various tweaks and fixes.

v0.23:
-Updated to the latest version of Ren’py. If you run into any issues because of this, please let me know.
-You may once again visit the Leanan Sídhe for “romance.”
-The writing room at the library is now open for business.
-Expanded an existing sex scene considerably with several different variations.
-Slightly expanded remove inhibitions content for a certain character.
-Hovering over a locked scene in the gallery will now provide a hint for how to unlock it.
-Added a new musical track.
-Livened up the intro with some more music.
-Evelyn will no longer show up at the training grounds if she has left town.
-Various tweaks and fixes.

v0.12.0:
Added conclusion (but not end) to Primrose’s romance path.
4 new scenes for Primrose.
Charisma training now goes up to level 3.
Tweaked how Primrose’s relationship with you develops throughout the game. This is not retroactive for old saves, so using an old save might make it much easier to reach one of Primrose’s new paths than is intended.
Various tweaks and fixes.
[*]Gallery added to the main menu. You can now replay and customize any of the finished sex scenes in the game.

0.5
-Agility training now goes up to level 4.
-New mechanic for the Perversity abiilty.
-Night scenes for Evelyn and Primrose fully implemented up to Agility 4 and Perversity 4.
-Music: Added a main menu theme and a dynamic theme for spell logic. More music will be added in later versions.
-SFX: Added a variety of different ambiances to spice up several locations. As with music, more will be added later.
-Expanded the preferences menu with sliders for music, sound, and ambience, plus a mute button. Note that the Sound slider currently has no effect.
-Added a new perspective to Samarra’s sex scene.
-Modified Evelyn’s breast reveal scene.
-Fixed a major problem with Samarra’s hair, replacing many images from 0.4.
-Bug fixes
0.4
– Added two new girls (Samarra and Nell) and some of their core events (featuring more than 110 new images). Please note that the new girls are not available until after a few days into the story.
– Added the first stage of agility training.
– Slightly expanded Callie’s changing room scene.
– Slightly expanded Evelyn’s night scene.
– Slightly expanded Primrose’s night scene.
– Loading old saves (from version 0.3.0 and up) should now work. Some changes may still cause old saves to break, depending on where you saved.
– Updated graphics for Evelyn’s night scenes.
– Added text to show when an ability check is successful. Not all checks will display these messages.
– Primrose’s schedule extended beyond two weeks.
– Minor tweaks to first conversation with Thaddeus if it occurs later than expected.
– Placeholder next/previous page buttons on clue screen if you somehow have more than 15 clues.
– Minor bugfixes

0.3
– Expanded main storyline.
– New scenes with Belle.
– New scenes with the Crone.
– New scenes with Thaddeus.
– Short new scenes with Evelyn, Callie, and Primrose.
– Minor additions to Remove Inhibitions for Evelyn, Callie, and Primrose.
– Revamped user interface now lets you access inventory, abilities, and see the current day and time.
– Updated certain older scenes to utilize the new inventory system.
– Also added ability restrictions to some of these scenes.
– All rollback restrictions have been lifted for the time being.
– Significant code changes to prepare for the loading of old saves in future versions of the game.
– Added brief note when reaching the end of certain types of content. Because this is a non-linear game, such warnings will not appear for all content. If you find yourself grinding to discover new scenes, odds are you have seen everything.
– Fixed a few typos.
0.20
– New scenes for Primrose (featuring more than 60 new images).
– The current day of the week is now shown when time progresses.
– Disabled the loading of old saves to prevent crashes and story progression issues.
– Lifted the time limit completely for now. It will be reintroduced in a later version.
– Backgrounds now use JPG instead of PNG, reducing the size of the game on disk.
– Tweaked clue names in the code to reduce the risk of accidental spoilers in case of crashes.
0.15
– New scenes for Callie’s store (featuring more than 75 new images).
– Rollback is now enabled. Previous choices are locked.
– Extended the time limit. The game now ends on the morning of day 10.
– Tweaks and additions to tutorial messages.
– Experimental perspective change button. Will be improved in future versions.
– Minor bugfixes.

Secrets Of The Valley Remake v0.4

Everyone Has Giantess Angel Waifus in Heaven v1.0 [Completed]