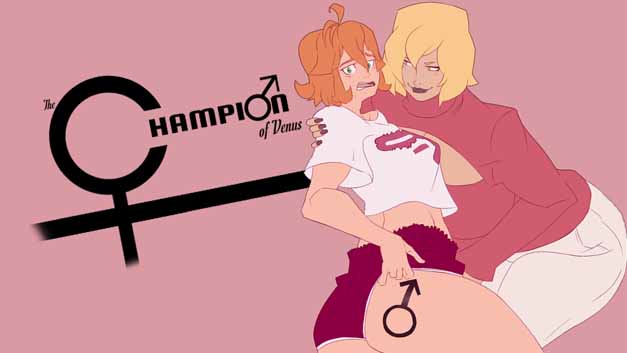 Champion of Venus tells the story of Rayne, a socially awkward shut-in accidentally chosen as the champion of a goddess of lust.
Yuri abounds as Rayne faces the world’s most powerful thots in a tournament to decide the fate of love and lust, where the price of failure is eternal servitude.
​

v0.7
Story:
Chapter 11: Prison of Souls has been added.
In this chapter, Rayne and co. find themselves in an otherworldly prison;
playthings of a cruel entity who calls herself the Demon Daughter.
Can they escape in time, or will they become Lamashtu’s eternal pets?
Chapter 11 comprises over 20,000 words of new content, filled with more ero scenes than ever before.

v0.6.1
That’s right – it’s time for a new update! No fancy intro this time; let’s cut right to the chase.
In terms of new illustrations, Version 0.6.2 is the largest update so far, featuring works from the likes of Octoboy, CaptainKirb, Lemonfont, and KiraLChocolate!

For a detailed breakdown of new features, direct your eyes o’er yonder:

Backgrounds:
– Areas in and around the club are now illustrated: the club interior has several backgrounds, and the alleyway next to the club is no longer a black void.

Other Art:
– For those of you desperate to know what Rayne’s phone looks like, now you can! Several in-game items now appear on-screen.
– Illustrations for ‘BOUT START’, ‘VICTORY’ etc now appear.
– The club bouncer now has a character sprite. How nice for him!
– In RAT END, King Tony now acquires a crown more befitting his station.
– The ‘intro cutscene’ now has a special background.

Misc:
– The UI has received an upgrade! There are now two separate textboxes: one for dialogue, and one for prose.
– Many, MANY textual improvements have been made, with a focus on pauses and ease-of-reading.

v0.5
Featured in this update:
– A new, ominous background for spooky moments (replacing the eyes bg).
– The climactic climax to Rayne’s bout with Gloria (spoilers: there’s lots of climaxing). Art by Sparrow!
– The end of the beginning, or the beginning of the end? In any case, I’m hoping to move onto Steam Early Access from here.

v0.4.2
– A lot more story, leading up to Rayne’s climactic bout with Gloria.
– A new CG sequence by Sparrow.
– A new BG for Goro’s club floor. The last one was a shitty MSPaint job, so I’m very happy about this.
– A new opening sequence that foreshadows the story better.

v0.3.3
– A fleshed-out Bad End for Rayne’s tentacle attack. Art still to come!
– The second half to Rayne vs Militsa, with 4-part art sequence.
– The conclusion of this story arc.

v0.3.1
This one includes lots more story stuff, including a (text-only, for now) Venus ero scene.
Also, the main villain now has art, and it is glorious. Her ‘reveal’ scene has been changed quite a bit to fit her design alterations.

v0.2.1
Version 0.2.1 features:
– Connie now has a full-coloured sprite and expressions.
– The cliffhanger has been resolved, with a tentacular scene drawn by Sparrow!
– A not-so-secret new ‘ending!’
– Text speed for ease of reading! Text no longer appears all at once.

v0.1.4
– A new pose and set of expressions for Venus.
– Chapter 4 has been significantly expanded, including our first animated ero scene by xxxx52.
– A new character! Followers of xxxx52 may recognise his OC, Aik!
– A large amount of the text has been edited, cutting out some of the fat.
– Choices matter now!