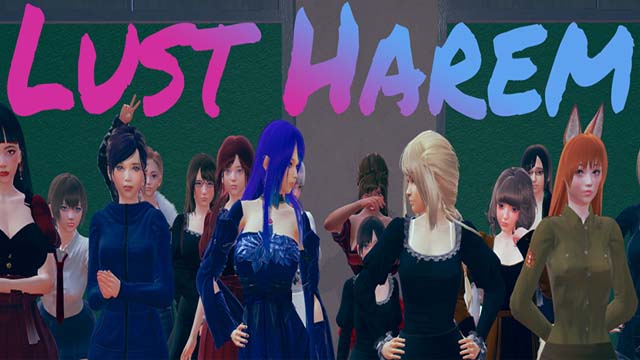 Lust Harem is a free visual novel game (18+) in which you play as a novice wizard trying to make his way up the ladder, achieve independence from his family and most importantly, score girls. Struggling with tuition fees, being overworked for little to no pay and being average in magics you have a lot to work with. Fortunately things take a turn for the better when you manage to capture a succubus and use her power for your benefit.​

Battle minigame:
Rat dungeon is now fully completed. You also get to fight some mages during combat practice. Mana shield or some defense is highly recommended.
-increased companion limit to 5 (that means 4 summons if u have Asara in party). Will increase further in the future
-improved various scripts. Pretty much everything has been touched. Biggest changes to: damagetypes, afflictions (conditions), summons and damage calculation
-made rats summonable with talismans
-improved the buff screen. It didn’t look good at all with more than 4 people in the party
-added inventory and some basic AI to monsters
-new enemies: golem, [redacted] and some mages to fight for you. Mana shield or mirror’s image is recommended against mages
-added vfx to some spells (fireball, missile storm, bleed, bite, seduction)
-new and more sound effects to skills
-skills now properly calculate and display mana cost when it’s changed by items or spells like earth armor
-added tooltips to skills and conditions in buff screen and combat
-rats had their defense lowered. Instead they now have higher evasion

GUI:
-improvements to various screens. Mostly inventory. Both looks and code
-it’s now possible to advance time with the world map open
-changed font for world map icons
-removed excessive movement arrows on various locations and improved their quality
-improved tooltip display. These now look cleaner and use black outline instead of a gray background
-you can now change main menu wallpapers in the gallery

Battle minigame:
You can now visit Asara to practice in the dungeons. The minigame has been expanded and improved with many different skills, conditions etc. You can unlock rewards by exploring the dungeon (menu wallpapers, slideshows).

Others:
-harvesting and crafting: added a bunch of plants and other reagents. Collect them and create items
-added cheat codes menu, found in the character stats window. These are for Kate’s story as some people wanted to help her out but weren’t given the option to
-new characters: Anisa, Bernie, Magda plus one more (spoilers free)
-3 new locations: Mia’s dorm, Willow’s hotel room and meadow (a forest, countryside area)
-old locations: expanded university. There’s now 2 wings/sides added to it
-skills are now learnable from different characters (Magda, Mia, Sofia, Willow)
-Henry Goldswindle has opened up proper shop, selling potions
-Susan now offers a discount after 10 blowjobs

Fixes:
-fixed helen’s university event triggers
-fixed burger manager’s sex scene not triggering
-hopefully fixed all issues with persistent data loss on android devices (this will not restore the data. Only prevent it from happening in the future)
-Kate no longer reveals she’s pregnant in the repeat event. This was happening before she told the hero she’s pregnant for the first time

-some glossaries have been redone or had their quality (frames) improved (asuka, asara, mizuki, varess)
-changed some conversation animations: asara, helen, henry, mizuki

v0.15
Happy to release the next version of the game. Some of the major changes include: android version, 11 new events, new locations and QoL stuff. The game has about 1300 new scenes not including animations (reworked quite a few old ones plus at least 50 brand new). One more thing I’m happy to add is the pregnancy fetish.

Quality of life changes:
-skipping time no longer takes the player home unless it’s midnight. This will make life easier when waiting for events. It also required a rework of many locations but it’s well worth it
-minigames (all or specific ones) can now be switched off in the new character/settings window. Hidden collectible magazines (that can be found in different places after you progress the story) will spawn if you turn off a minigame
-certain fetishes can be switched on/off in the same settings window
-the glossary now displays the number of unlocked pictures
-most animations have been changed into a new format. Less game size, less lag.

Locations:
-2 new locations: beach and swimming pool
-most have been redone in regards to skipping time
-a few new conversations with characters, mostly new ones (Monika and her bimbo friend, Hana, Iroha, PE teacher, Asara’s new friend, one beach bimbo)

GUI:
-android version of the game. This one required a lot of testing and adjusting but it should be working just fine
-new screen with stats, settings and fetishes
-new glossaries (all new ones are only unlockable by collecting magazines, whether the minigames are on or off)
-locked slideshows in the gallery have new locked previews. The standard ‘slideshow locked’ showing Eileen and Helen is gone
-general improvements to the GUI (font, buttons, etc.)
-some work on the main menu (see yourself in game)

Minigames:
-switching off the 1in3 (burger) minigame increases daily money gain by 15 €
-increased money rewards for 1in3 (burger) minigame (20€ for 300+ points, 50€ for 1300 points, 95€ for 2500+ points)
-the 1in3 minigame can be still activated if you switch it off, giving you 2 scenes of the hero working. Doing so twice will trigger the sex scene with the manager
-reduced cost of neko overtimer
-some other minigames like the battle engine have a few extra scenes if you switch them off, to actually show the fight etc.
-memory minigame timer increased by 5 seconds for all dificulties
I’d like to improve the minigames and actually make them more interesting in the future but I’ll need someone who’s actually good with python and isn’t… well, me.

Others:
-skipping time in the shower from evening to night starts the bath repeat scene. It also bypasses the friendship requirement
-friendship requirement for the above event lowered from 10 to 4
-fixed errors after sleeping with the Burger Joint Manager. This one was a complicated matter
-fixed Asara showing up in the library when not supposed to

There’s also been other bug fixes and improvements that were done along the way but haven’t been noted in the changelog.

How to use cheat, Bro?