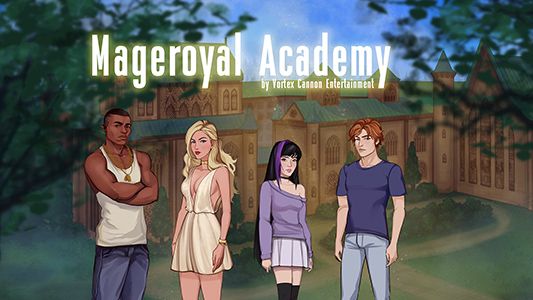 Imagine a world where there is magic. And there is a school of magic. And this is not a Potter and pink unicorns. There will be sex, drugs, and devastating spells. Parallel worlds, fantastic creatures, mystical events. In general, magic for adults. And no magic wands.

Imagine a world where there is magic. And there is a school of magic. And this is not a fucking Potter and not pink unicorns. Unicorns maybe will be. Sex, drugs, and devastating spells. Parallel worlds, fantastic creatures, mystical events. In general, magic for adults. And no magic wands.
All of your decisions and actions during the game will affect future events.

0.160 PREVIEW BUILD
We are actively working on an update for Mageroyal Academy and will be ready to show you new content soon.
During this time, the game received a new engine, the mechanics of movement and interaction with objects in locations were updated. Character control has become more responsive, and NPCs are more alive.
There are new types of secondary quests, both single

v0.141
In the new build of the game, we have continued the main storyline. A continuation of the second lesson was added, a new location – the headman’s room and even a small preview of the new world.
In addition, many bugs and game freezes have been fixed.
The movement speed of characters has been increased to make it easier to explore large locations. We are also working on the running mechanic, which should come with the next update.
Added new tips for the gameplay.
Added new translation languages.

In the new build, we have a lot of new features and improvements.

The night sandbox event with Dolores has been updated and completed. This mode will be expanded significantly soon. In the sandbox, you can choose any of our 4 heroes to visit the locations in which you have already been, chat with the NPCs you met there, and find new quests. Or love adventures

We also continue the main storyline, which starts with a new lesson. A bit of erotica and humor are guaranteed.

Added a new control mode – wasd + mouse. As before, you can control with mouse only, or your finger if you play with a touchscreen device.

We continue to optimize the game. It is now significantly more stable on many devices.

v0.11 Alpha
In this update, you will find a continuation of the main storyline and some improvements in game mechanics.
So all four of our heroes return to the academy and went to the director, who will tell them what is happening and what our heroes have yet to face.
Isometric action mode has received many improvements. Added WASD control and tips, both on the control itself and the use of skills. Improved display of the animation of the skills.
In turn-based boss fights, new skills and more fatal blows that tear your enemies apart have been added.