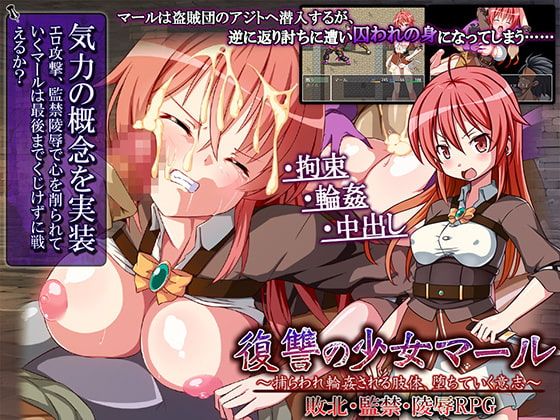 MERLE GIRL OF VENGEANCE APK Android Port A young village girl, Merle, once lived together with her parents in happiness.
One day, as she waited for her parents to return from a trip, she was greeted
with a knock on her door. A militia man from a neighboring town would soon
deliver news that would change her life forever.

“Your parents were murdered by a group of bandits.”

Merle, lost for words, was filled with despair and she vowed to seek justice
for her parents, no matter the cost.

Discovering the location of the bandits’ hideout, Merle fulfills her promise
of vengeance: “I will avenge my father and mother… No matter what!”

Her heart resolved into action, Merle leaves the safety of her village behind.
Her training, stealth skills, and trusty knife would be the only protection
against the imminent danger of having her nubile and supple body defiled by the bandits …

[Stealth System]
She dodges through enemies’ sights to the very depth of the hideout.
She can kill an enemy with a single attack when she attacks from behind.
However, a battle is inevitable when she is found.

[Growth Skill Tree] (New!!)
You can grow her skills of your choices such as ones specialized in fighting and sneaking.
To go the way with fighting skills or sneaking skills… This is your decision.

[KP Gauge] (New!)
“KP Gauge” indicates how much Mar is motivated to take revenge.
When running out of this gauge, she loses heart and gets caught to a game over.
Her facial expression during battles changes with the fluctuation of KP.

[Tactics in Escape] (New!!)
When her health runs out during a battle, she gets caught and confined by the group.
She will be violated while in confinement. In time, there will emerge a choice whether
to escape or not. Upon a successful escape, she will return to the beginning of the map,
but a failure in the escape will lead her into more violation.
The success rate of the escape is displayed as a gauge during the violation.

[All Scenes Will Be Unlocked as a Post-Game Content (only in the retail version)]
Scenes you have missed will also be unlocked after a game clear
so that you can concentrate on the gameplay.