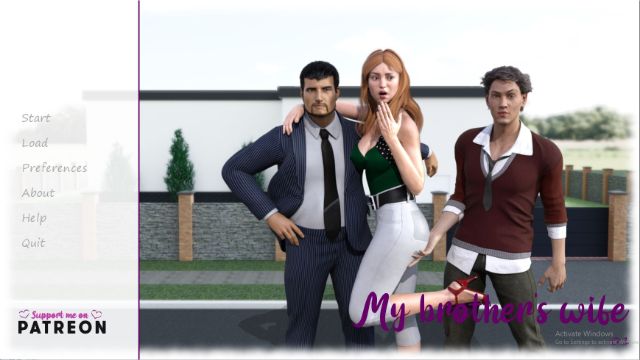 Three years ago, when Cole’s parents had just died, his older brother Alan, now his legal guardian, decided to send him to study at the other end of the world. Having rarely seen each other during those years, the two brothers are unfortunately not very close. Now a graduate of this prestigious school, Cole is back to the country where he will live with his brother until he chooses his new life. In the meantime, Alan has married Jennifer, a nice and pretty young woman with whom Cole will also have to live. How will this cohabitation evolve? And will Cole get closer to his brother or rather to his beautiful wife? The choice is yours!​

v0.6
This update implements the day 6. As it is a Friday it means that Alan will finally make his return home. Enjoy the last few moments alone with Jennifer before your brother takes over as head of the house.
This update is more extensive than I had originally planned. I wanted to make about 200 frames and in the end there are more than 300 frames and more than 16 seconds of different animations.v0.5
-400 unique rendering images
– 6 animation of a total duration of 25 seconds made from 150 unique animation frames. The videos have been improved by AI increasing the fps and making them more fluid. So all the videos are now composed of +1500 frames.

v0.3
Hi everyone here is the version 0.3 of my brother’s wife.
As expected this version implements the day 3.
This version contains more than 170 new renders and 200+ frames of animation. Enjoy

The World with No Memory v0.3