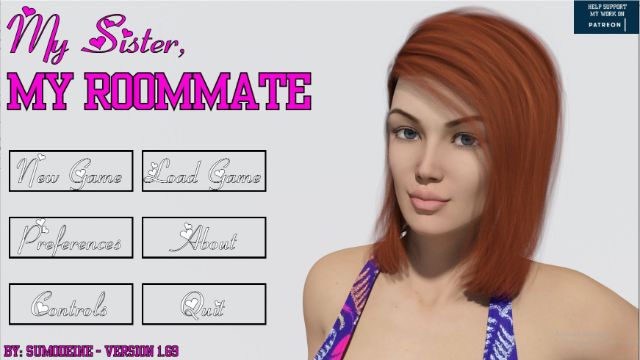 My Sister, My Roommate v1.69 [Completed]

You play Taylor, an introverted 18 year old who is forced to live with his sister, Nikki, when they go away to the same college, due to a University housing error.

Taylor is a virgin and Nikki is kind of a slut. Can she help get Taylor out of his shell and maybe help him with the ladies? For Taylor’s sake, let’s hope so! I expect to take “My Sister, My Roommate” a lot deeper than the demo currently shows. In future releases, sex won’t come as easy, but I wanted to make sure I had the ability to render quality sex scenes…

And well… I was so preoccupied with whether or not I could, I didn’t stop to think if I should…​

v1.69:
New content after Ashley’s arrest, which will lead to all new endings. Who will Taylor end up with? The end will depend on you!
Remade 507 early game renders
588 renders for new storyline content
New Main Menu screen
Added music to the main menu and game

v1.0:
– Our story concludes…
– The morning after. Depending on what route you took in previous updates, that will mean different things
– Taylor has to check out of the dorm with Jessica before they leave for Christmas Break
– Taylor and Nikki go home for Christmas (with Molly if Taylor chose to date her)
– It’s Christmas Day! The events that unfold will all depend on the choices made throughout the rest of the game
– The largest release I’ve ever done at 366 renders, 4 potential sexy scenes, with 3 traditional style (stop motion) animations, and 1 video style animation

v14:
– Our story continues…
– How will Nikki and Taylor handle Ashley with a gun?
– The aftermath of the hostage situation, and a time jump to the trial and the end of the semester
– How will Taylor handle the verdict?
– And of course, most major events that happen will be impacted by decisions you’ve made within this update or the past updates.
– 330 beautifully done renders, 4 potential sexy scenes with 3 animations

v13
– Our story continues…
– Taylor and Nikki wake up naked together and determine how they will handle what happened last night. Taylor will rush off to class, where Molly will ask an important question. Then you will have a choice what Taylor does for the afternoon: Go to Cory’s Volleyball tournament or do Professor Katcher a favor. After that, D’Brickashaw invites Taylor to a party, and then back to the dorm we’ll go!
– Of course, most things that happen will be impacted by decisions you’ve made within this update or the past updates.
– 260 beautifully done renders, 4 potential sexy scenes with 2 animations

v12
– Our story continues…
– Taylor has a busy day ahead of himself. He has an appointment to take pictures with Professor Katcher. And he also promised Molly she could paint a picture of him for her art class. And, of course, there will be a few adventures along the way!
– Updated the side image sprites. I put them in a while ago, and liked the concept, but wasn’t crazy about the images. I updated them so they look a lot better now.
– 218 beautifully done renders, 4 potential sexy scenes with 3 animations

v10 Changelog:
– Our story continues…
– After a crazy weekend, it’s time for Taylor to go back to class, where he’ll get a text from Mrs. Sollain. She needs his help moving furniture at her house. What happens from there is up to you.
– The decisions you made in the past (and in this version) will impact the story you experience when you play through this update
– 205 new image renders and a couple animations, making this update the largest one I’ve done yet!

v9 Changelog:
– Our story continues…
– A new day of content is added – It’s Sunday and Nikki is board at work so she invites Taylor and Molly to hang out at the beach during a rainstorm… And they get to drinking….
– New character, Sarah, the beach bartender added
– The decisions you made in the past (and in this version) will impact the story you experience when you play
– 178 new image renders and a couple animations
– There was a slight glitch in the coding I did from the last version. If Taylor was inconsistent with his decision to watch Nikki with other guys (said yes early in the game, and then changed his mind in V.8, it messed up one of the variables (that I needed to call back to in this version). It’s obviously since been fixed, so, if you that sounds like something you did, you may want to load a save to just before the hot tub scene where you have the decision to let Nikki and D’Brickashaw join you – otherwise the dialogue in this version won’t make sense. The number of people this impacts will be small, since I assume most people would be consistent with those decisions.

v8 Change-Log:
– Clarified the relationship between Nikki and Taylor so they are childhood best friends. This caused old saves to not work anymore, so you’ll have to start a new game. Unintended consequence that no one is happy about

– Once you get back to where the we left off:
– Our story continues…
– It’s Saturday, so it’s the day Taylor has to tutor Cory, but after last night’s fiasco in the restaurant, he’s not sure how the session will go.
– Taylor takes a shopping trip with Nikki and Molly, then will have the choice how to spend the afternoon.
– Then the night will finish up at a party, where the ending depends on the decisions made earlier in the day.
– 160 new renders for V.8 content
– I went back and cleaned up some particularly grainy or bad renders from early in the game.
– Added three new animations to the first sex scene with Mrs. Sollain from the first release demo – 23 new renders.
– All the main characters now have side images on the screen when they are talking.
– 160 new V.8 renders + 23 V.1 updated renders = 183 total new renders in this release.

v7: Changelog:
-Our story continues and sets up a lot of important events that will happen in the future.
-Our day will start with a meeting with Professor Katcher to go over the pictures that Taylor sent last night. After that, we’ll head back to the dorm to talk to Nikki, and see where things go from there…
-We have a new character introduced – Chelsea. She’s Cory’s roommate and volleyball partner.
-We’ll also see an old friend from the original demo 😉
-This update has 3 sexy scenes, and 1 of those has animation. (Including a scene with Nikki – which is why this update is here.)
-99 new image renders
-I fixed an issue with the previous versions where you would have to copy old saves into a new save folder. Sumodeine was changing the build name with every update, which messed up the save folder, so new saves from the last version should transfer over on their own from now on. Let me know if this doesn’t work.

v6:
-Our story continues…
-202 New Image Renders
-3 Different Endings, depending on your choices from both this update and the previous update
-Each ending will have its own “happy ending” (with animations), as well as another sex scene that everyone will experience
-Fixed a couple minor glitches from previous versions, which should not impact old saves.

v5:
-Our Story Continues: New scenes and storylines as Taylor’s relationship with Molly, Nikki, and Ashley continue to develop.
-A new character is introduced: Skylar
-While there is only one path in this update, there is a choice that will impact the future storyline that Taylor will experience. Old saves should work with this update (yay!).
-Added the option to skip the Nikki/Grant Blowjob Scene at the party on the first day of college. While it is important to the overall plot for Taylor to know Nikki is a slut, I do understand that not everyone wanted to see it and some are sensitive to things like that. With Cory telling Taylor about it later in the game, I decided I’d give the option for players to not see it if they didn’t want to. I probably should have added that option a couple updates ago, but I kept on forgetting.
-Fixed the spelling of “sexiled”
-125 New Image Renders & 4 Animations

v4:
-Taylor’s story progresses
-First day of classes – new character (Professor Katcher) introduced
-A date with Molly, a date with Cory, and a potential encounter with Jessica if Taylor chose her for a date earlier in the game. If Taylor chose Cory for a date earlier, and this Cory date goes well, then he will have a happy ending to his date. If Taylor has not gone on a date with Cory in the past, then he will experience the “first date” with Cory from a couple updates ago.
-162 image renders with 2 potential sex scenes (with animations).
-Using old saves will probably cause glitches, so I recommend starting a new game. Sorry guys. I know how frustrating that can be. I’m really trying NOT to go back and alter the old code, but in order for the current game to work like I want it to, it had to be done.

v3:
-Our story progresses – it’s the day before classes start and Taylor doesn’t have anything to do.
-New character, Ashley, introduced.
-First date with Ashley. How the date ends will depend upon how well you paid attention early in the day.
-Sex Scene Animations!!! They aren’t perfect, but they are there. And right now, only the latest scene(s) are animated. I do intend on going back and adding them into the previous scenes, but that will be a small update in the future.
-112 new image renders in this new update.

v2:
-New scoring system – You’re decisions will impact whether Taylor is a Gentleman or a Deviant. This will ultimately change future interaction choices with other characters.
-New Character Introduced – Cory is a hot student athlete that Taylor is tutoring. Can he figure out a way to seduce her or will he be an awkward mess?
-Three dates to choose from – Should Taylor ask out Molly (the innocent girl from Iowa), Jessica (the RA), or Cory (the student athlete)? The choice is yours!
-All the while, how will Taylor and Nikki’s relationship progress?

We disable comments to the public due to high volume of traffic and spam comments, Commenting is only available for VIP members.
4 1 vote
Total Game Rating
Subscribe
Please login to comment
2 Comments
Newest
Oldest Most Voted
Inline Feedbacks
View all comments

The links for taboo edition aren’t working. The mega link has been terminated and the racaty gets timed out every time. Please fix this.

Last edited 6 months ago by Steve
0

you can use the mirror link