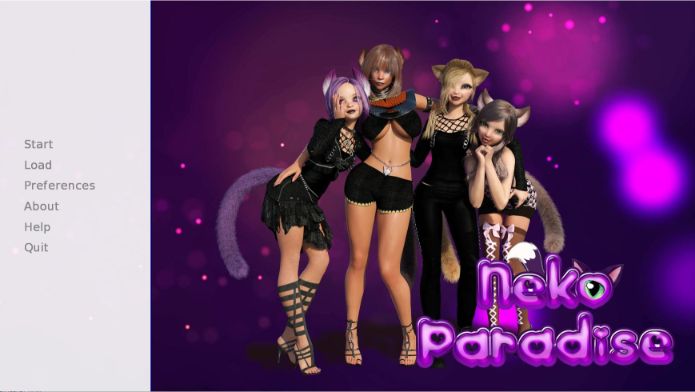 Neko Paradise APK Android Port – You used to go fishing with your father ’til one day you both got caught up in a storm.
After being swept off of the boat and away from your father you woke up on a strange Island
There you were found by a real beauty who you later married and had a daughter with.
Now not remembering the past, because of the accident, you are trying to recall the events that led you there.​

v0.04
I integrated a new animation system that will appear in V0.04 of Neko Paradise;
I guess, there is a slight change that It is probably going to be the new meta for Ren’py games.
Added content.

v0.05
More story content with ‘Lily’, the winner of the voting poll.
Added Mitty, Autumn, Bera, and Kleo as story content.
Added 2 new wallpapers
Updated map with 2 new locations
Added options to toggle animation loading and animation quality for low gpu users to be able to play the animations.
Added spearfishing minigame, but needs to be polished.
Added Chocomint’s second morning visit.
Added other extras to the game and some bugfixes.

v0.07
New system build – V1.0 Base system setup – Old Saves won’t work.
New game system won’t require a complete game download anymore. (Windows/Mac)
Specific updates and patches will be available for patreons inside discord, not patreon page.
Special scene with Chocomint one of the ‘winners’ of the voting poll.
Added 1 new character to the game story and 3 new standalone characters.
Added 1 new main wallpapers and 1 new standalone wallpaper.”
So to clarify, 8 wallpapers are present and 2 extra ones if you have Nina and Cotton installed.
Game now features a separate story event system appart from the character events.
Improved Interface, Gui and Hint System.
Added replay for sex scenes as option in the bed.
Added 2 new music to the player, other extra sounds, 20 new sex animations and over 100 new images.

v0.09A
Keep in mind that this is not the complete V0.09 release, it only features the new characters and systems, the rest is coming soon.