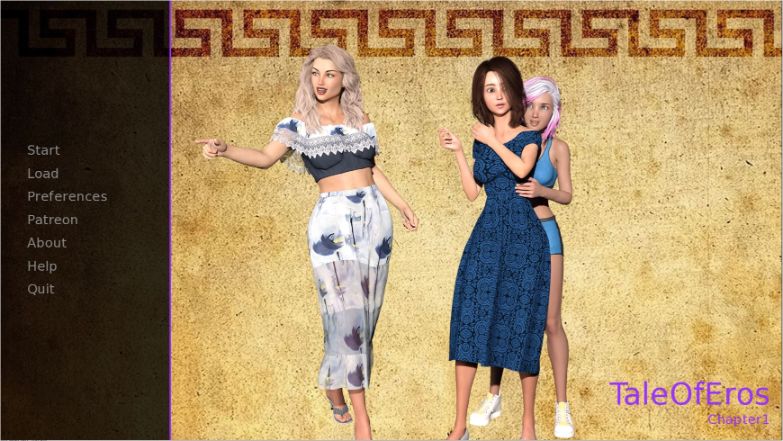 Immerse in a mysterious Greek story and witness the events of a young god’s daily life.
Observe how the story unfolds along the way while you seek the truth.
You will have to deal with sarcasm, comedy, sexyness and a little teasing.
​

Ch. 1
Changed Engine from tyranobuilder to Ren’py
Game is Completelly new, all renders new, gameplay new, everything new, its like a new game, only the story remains.
Characters and places are remade.

Ch. 2
Changed Image format reducing game size by 1/4 but mantaining quality.
Smoother Animations with more frames per second.
English was corrected by a English guy that drinks tea and has a English uni degree, so lets hope it is good now.
Removed Choices, now it’s really a Tale
Reworked story to make it more interesting and more appealing.
Ch1 added better renders and more content.
Reworked every render of the game with Photoshop

Ch.3
Added +74 renders (total of 204 renders)
Added +4 animations( 1 one scene, 3 on other scene.
Upgraded render graphics of Ch3
Ch3 written with Punk777
Ch1 and Ch2 partially rewritten by Punk777
Added Music in some parts of Ch3
Added trailer at start to show my next game

Penny for Your Thoughts v1.2.1