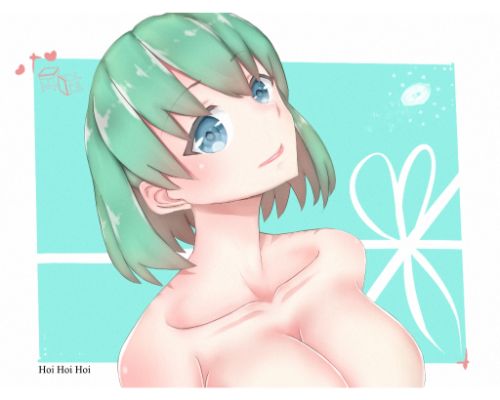 My name is called “Nga”.

I’m being quite happy with my life. Having a lot of friends. And, parents aren’t too strict to me. The only thing would make me confused is that my mind is always not clear when just waking up…

Now, I’m going to school in a good mood as usual. But…I have to go to another place before that!

Arrived the residential district separated by two roads from my home.

Ringing the doorbell. But, no response.

“The slacker guy has not woken up～?”

In this morning, I got out of bed before 6 o’clock, because of being so excited.

Recently, I had got a change in my life. Yes——I got a boyfriend finally!

As I don’t have a childhood neighborhood, it’s incredible I could go to boyfriend’s home to wake him up like the plot in manga. I can’t help being excited. More and more things in manga will happen on us!

Such as naked apron.

After school, in the classroom that’s colored by sunset——”Ah, no…no～I’m daydreaming again. This’s really my bad habit!” I slapped my face to let my mind come back.

Anyway, just think about how to wake the slacker up now～!

One thing suddenly appeared in my mind – all the messages telling my friends that I got a boyfriend both had no response back. Oh, are they jealous of me? Don’t mind, don’t mind. After all, my dream had come true!

“Mmh, ha～——” In order to store more energy in my lungs, I deeply took a breath again.

I had loved someone——for a long time.

Where the first time I saw him is in my dream. He was a person——who loved me very much. And, he’s my Prince Charming who would save me when I fell into difficulties.

Then, now, he——really appears in front of me!

His name is called “Hugh”.

He is the one I love.

He is my Prince Charming that really exists.

If it was a dream, I would choose to never wake up——

Love still exists in this world, so human beings won’t be extinct. I think so.

Hope the world become more beautiful… Therefore, I prayed quietly, to the far far stars outside the sky.