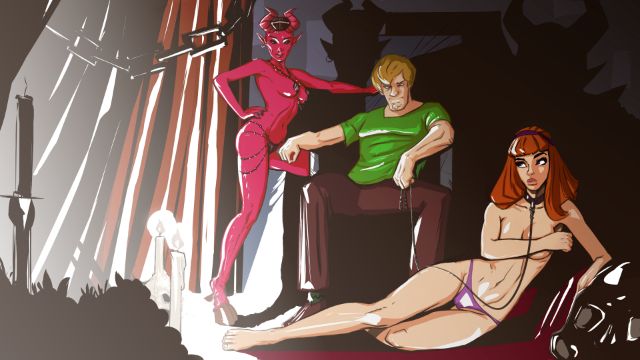 Shaggys Power APK Android Port – Team Scooby’s latest investigation ends in a complete nightmare!
Left with no money and no place to live, they are forced to stay in an unfamiliar town for an indefinite period of time.
And it seems that this town holds a lot of secrets and mysteries…​

v0.0.6.5p
update 0.0.6.5 is technical.
It changes the interface a lot, changes the code a lot, adds cool new tools, and turns your old saves into garbage… Yep…
But it was really necessary.
– Added Spanish language
– Added mobile version
– Added Linux support
– Very much changed engine – but who cares)?
– Old saves do not work!
– Possible problems with the mobile version!

v0.05p
Added chapter 4.
Italian language added to the game.
English has been redacted.
Fixed some minor bugs.
(switching music when approaching the girls room, etc.).
For starters, the prologue has been expanded and a number of map bugs have been fixed…
Completely redone the start screen! Added all sorts of important stuff to it…
The sky and vehicle animations make the map more lively.
Completely redesigned room description script.
Added new location and three new characters, of which two characters are brand new, as well as a redesigned succubus avatar.
Added three new nsfw scenes.
There are a lot of different scenes added in general.
Anyway, now there’s finally an opportunity to earn in the game! This is of course only the rudiments of an in-game economic system, but a start has been made.

v0.04
Fixed a few minor bugs in the prologue.
A new character display script has been written, which will reduce the weight of the novella both now and in the future.
Transport illustrations have been prepared, but the animation is still a long way off.
Prepared a set of avatars for two locations, a police station and a comic book store.
Character development has already begun.
The police station and library have been added to the map.
Changed the map icons.

v0.0.2 fix
Ready and tested a number of basic mechanics, such as:
– character fatigue
– days count
– money and sin-points counting
– day change
– timer for main and side quests
Not all of it, of course.

v0.0.2
– One skit in the kitchen.
(The skit takes place in the morning.
You just have to send Shaggy to bed to access it)
– One skit to meet a new character.
(You need to turn on the cheat menu on the map to access it. It is located at the succubus. There to select the item “Witch”)
– Night map of the city.
(To access it, go in and eat at the fast food)
– Three random scenes in Macronalz
(Work when magic is applied)
– Shaggy’s office.
(It’s empty for now, but you can summon a succubus there by clicking on the pentagram, on the wall)
– Draft quest with death and the witch
(To activate it, you need to select the flower in the cheat menu. And also I’m not sure about the stability of this quest …)

Anime – Succubus-san Is My Waifu! [Completed]