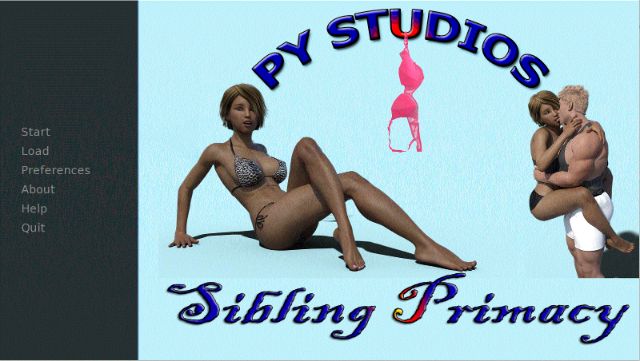 Sibling Primacy is about a young actor and his sister.
Their grandmother just past away and their mother went away to make arrangements for the funeral and care for the widowed grandfather until he could be placed in a nursing home.
The sister had failed her senior year of high school and with only a few weeks of summer school left.
The brother convinces the school to let her finish in Spain where he is filming a movie but his sister has other things on her mind.
Just getting started into the gaming portion and my trial at animations.
Introduced new characters and locations.
Added in-game iPhone with apps, some work like Camera and map.
some still in development.

Change log in game directory.
Now we’re getting into the gaming portion with some animations. Introduced new characters and locations, added in-game iPhone and Day Planner. This is evolving and my first attempt at new things like gaming and animations. I went back and changed some bad renders and I know there’s some more left to change out still, I’ll get to them.

I’m looking for a team for this project so if you’re a developer and interested let me know.

v0.1
I got the in-game iPhone working, mostly.
with Map app… Has scrollable map of Spain where MC is located.
Has a Camera app that takes pictures.
A Photo app to view the pictures taken.
Music app has Sound, Music and Voice volume controls.
### Disabled for now ### Calendar app is in testing mode and should bring up
the day planner. But if you bring it up you will skip scenes and miss points.
(See below)
Notebook app is kind of working but is commented out for now.
Plans for an English to Spanish app in the works.
The Day Planner is working and will handle the daily activities,
when it comes to points for gaming progression.
Use it to schedule your daily activities, you have some choices
but it will choose some things for you based off of your choices
and where you are in the stats.
Introduced a couple more characters and locations.
A couple of attempts at animated scenes.
Building a few pathways for the player(s) as it could be played as a 2 player game,
so have your girlfriend, wife or sister join you and play the female characters parts.
Please if you like the game leave a like or rating. Remember the gaming is just
starting out and is like in testing mode. This is my first game.
I received some unfair ratings on the demo release even though I explained it would
be more like a VN in the demo than a game until I started building the gaming in the
0.1 version and even now it’s just a start as it’s the first gaming version release.

It may seem a bit of a grind but more content will be added in future updates.
Give feedback and I will consider making changes.

v0.2
Added more scenes, 3 new animations during the mini-game to breakup the repetitive scenes. I still need to add Liv to this and some more work like fixing the head movements on the handjob scene. I lighten Shelly a tad and retouched and some scenes I had to redo as her skin tone seems to change in different lighting conditions, maybe it’s my lack of knowledge in this area??? I also did away with the no makeup sprites as they were too far gone to fix with it not working as planned anyway.
————————————————————————–
Programming-wise I separated the daily calendar and show it at the top of the screen so you’ll now what day of the week it is. During the mini-game I think it shows when the stats show during the daily planning.
At this stage no walkthrough is needed, Your schedule should be mornings classes, afternoons studying and evenings gym to have all the stats come out at about the same time. Watch for the Graduate button to popup when you reach the end of your classes. In maybe the next update I’ll make it a big celebration.
The calendar is nice the game day starts on June 12th, 2017 and it can accurately calculate the days, lunar cycles, etc.. for nearly 400 years.
The person who wrote it made a mistake that I don’t intend on correcting unless someone can convince me that 400 years from now someone will still be developing on this game. Anyway I’m not sure if I’ll use it to it’s full potential but it’s nice to have. If anyone wants to use it have at it.
Check the screen.rpy at the bottom to see how the day of the week screen is pulled up, the script.rpy to see how to advance the day and the stats.rpy to see how the game start day is added. Then copy the cal.rpy

v0.3
Mostly programing changes, the iPhone received a makeover reducing the apps
to mostly the ones that work or are under development. I added the girls
stats under the Contacts app. The calendar has a makeover and the weekday,
day of the month and month are shown in the upper right corner of the screen.
Code inputs are required now to access Taboo or Extra scenes and if enough
people request it I may add another code for some really taboo scenes.
To access the taboo edition input case sensitive without quotes,
“Incest is best”