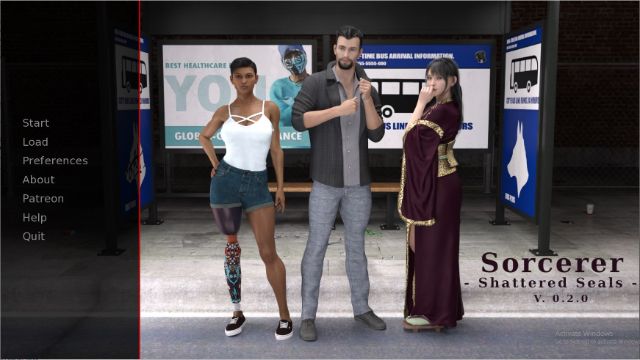 Sorcerer APK Android Game – This is the story of Alexander Ward, and him discovering that the world isn’t as simple place as it seems. Follow his journey in this new world.​

All of these (and more) are coming with future updates.

v0.28.0
Day 28 implemented
389 Renders.
All the scenes are in the new pause controller, or should be.
Fixed some bugs and issues.
Grammar and spelling fixes

v0.26.0
Day 26 implemented
398 renders
Some of the older scenes (before day 10) has been converted to obey the new pause controller.
Spelling, grammar, bug fixes (Thanks to Adry Lemon, Andro, ShaddyModda, and probably others who I can’t recall after 4 hours of sleep.)

v0.24
Well, this is happening soon, just waiting for one of the packets to upload.
Changelog:

So the releases. This update will be a bit special case but more of that in the actual release post.

There will be release within next 24 hours, depending how pain my net is being. Anyway… I have still some tests to run and build which will take few hours
Changelog 0.23.5

I’ll put up the release schedule once I’ve done the final tests and done the release builds.
v0.23.0
Day 23 implemented

Day 21 implemented
276 Renders
Bunch of grammar and spelling fixes. (Adry Lemon, Tora, Phaelan Hood, Shaddy… and few others who I forgot and I can’t find the post at the moment)

So with this release the “transparent textbox mod” is discontinued and I recommend removing it, instructions will be in the release post.

v0.16.0
Day 16 implemented.
– One step closer for getting Miyuki back and few hooks for the future.
317 renders
And grammar fixes (Thanks to Adry Lemon)