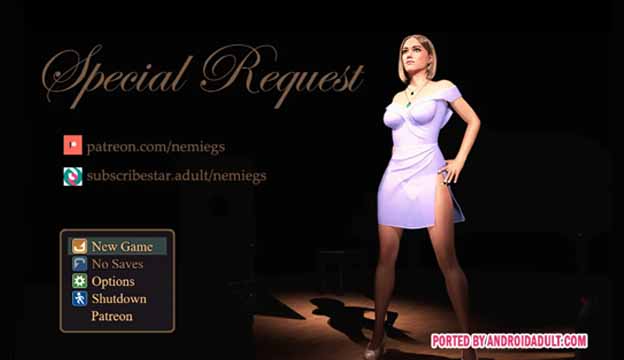 Special Request APK Android is an RPG game about a successful woman that gets involved in somebodies’ game behind her back. The story will lead to the discovery of some secrets in a City, and the once sunny environment will show its dark side now. The main protagonist will have to endure mostly blackmail and corruption, but there will be other fetishes to meet as well. Will she be able to fight her life back again??​

New features:
*Press “h” to hide textbox during scenes.
*Changed Quest Log. Now you can see only quests available or in-progress. Thus making the list shorter and easier to navigate.

Bugs fixed:
*Memory leak. Now it is under control.
*Time system if you chose Ritvar to be a good boy. Previously after the 1st event time was lagging by 1. (Instead of the morning it was showing night for instance.) Unfortunately, You will have to restart the game before the 1st event in Orphanage to see the difference…

Known bugs:
*Quest from Monday is not deleted from the log for some time. The steps are marked as completed there. It will disappear after a while. If you play the game from the beginning you won’t see this bug at all.
*Quest from Wednesday stops at “collect papers from Jean” in the log. It was my mistake why old save files were not compatible with v0.2 in the beginning. I had to delete the last step “go home” to make them compatible again. But as you know, you just have to go home after a conversation with the secretary.

v0.5
-403 new renders (not counting all characters for maps and faces for dialogues)
-5 animations.
-2,5 in-game days.
– sidequest in the park (active on Friday evening)
– optional events on Saturday

v0.65
A scene gallery called “Hall of Shame” added to the game menu.
90% of old pictures re-rendered. The only ones left are early scenes with Donald.
All of the animations re-rendered
The shower screen removed completely starting from day 2. It can be accessed through the “Hall of Shame” now.
no new story content