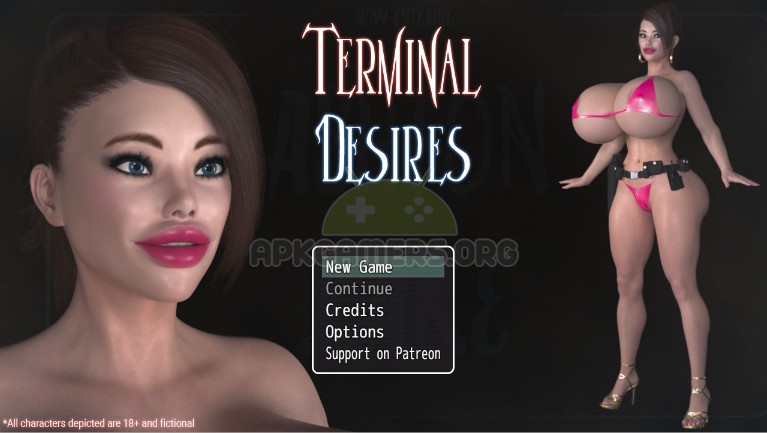 Terminal Desires APK Android Port – is an erotic, zombie themed, role playing game made with RPG Maker MV. Set in a fictional version of Earth where incredibly skimpy outfits and huge proportions are the norm. Control police officer Tiffany Neil as she and her partner investigate a mysterious distress signal from the small, secluded town of ‘Ashton Lake’ and uncover the horrors within.
Explore the town, face fearsome enemies in combat, make important story defining decisions and sexual choices. Will she submit to her every desire? Or will she resist and uncover the shocking truth hidden deep within the town’s walls? Her fate, along with the town’s is yours to decide…​

v0.05 Alpha
!!!!!!WARNING KEEP YOUR OLD SAVES!!!!!!
!!!ALPHA SAVES WILL NOT BE COMPATIBLE WITH THE FULL RELEASE!!!
*Added 4 out of 8 sex scenes from v0.05.
*Added WIP versions of 2 new quests (Go see Jebadiah).
*Added a new girl – ‘Debra’.
*Added Companion Framework with Debra as a test case. (Debra will get combat sex scenes in a future version (NOT v0.05 FULL RELEASE)
*Remember to download the updated ‘Content Patch’ from the blog.
*More Save Slots.
*Vanessa can Make Armor Repair Kits out of 3 Cloth scraps + 1 ‘Needle & Thread’.
*So much Missing it isn’t funny. Definitely Recommend waiting until the FULL RELEASE of v0.05 – this is neither a polished nor complete experience.

v0.05b
*Fixed the wooden boards outside Magnum’s pen in the woods.
*You can now see which fetish content is toggled on/off before making a toggle selection from the “Toggle Fetish Content”‘s key item menu.
*Hopefully fixed a problem where the player could die upon loading an earlier save game due to thirst/dehydration.

v0.06b
*Added 2 new quests (1 if sided with Milburn & Helped Vanessa, another in the ‘South Western Alley’)

*Added a new enemy (Sewer Zombie) & their combat sex scene. (Found in one of the 3 new interiors)

*Added 3 new interiors in the east part of town.

*Added a new ‘Surrender’ option, to lose the fight without submitting and becoming a zombie slut automatically.

*Fixed a save updater issue where you could incorrectly receive the Helping Hand #2 quest before completing #1. (Will only affect saves that haven’t been updated)

*Fixed an issue where you could go into the woods before talking with Jebadiah.

*Fixed some typos and other small bugs.

v0.07 Beta
*Added the next section of the main story. Talk with Terry to continue. (New characters, Areas & 2
gameplay paths – each with an optional sex scene).
*Added 2 new enemies (Female Zombie & Alpha Zombie) & the Alpha Zombie combat sex scene –
The Fem Zombie scene is incomplete & will be added in the full version).
– Note: (Female Zombies will be dispersed throughout previous maps in a later version).
*Added an optional handjob scene to the quest “A Helping Hand” (Will be viewable for those who
have already completed the quest in the full version).
*Added an option to repair multiple ‘Armor Pieces’ at once if you have enough ‘Armor Repair Kits’.
*Added an option to disable the screen shake e

v0.08
!!! WARNING! SAVES MADE IN THIS ALPHA WILL NOT BE COMPATIBLE WITH THE FULL RELEASE !!!

!!! PLEASE KEEP YOUR EXISTING SAVES FOR THE FULL RELEASE!!!

[NOTE: A new “Stealth” feature will be added in the FULL RELEASE, so the new gameplay sections may be more challenging in this ALPHA.]

*Begin Day 3 and experience 3/5 of the remaining Casino Story scenes.
– Includes 2 new story sex scenes total. One if Kiana is alive. One if Andre is alive.
*Added Renders for Tiffany’s 3 new body types.
– Existing combat sex scenes have not yet been updated. They will support Tiffany’s new body types in the FULL RELEASE.
*Added the new Bestial Zombie enemy with one combat sex scene.
*Added a new “Frag Grenade” item that can be acquired through the new section of the Casino Story & thrown during combat for massive damage.
*Added the ability to hide the dialogue window by pressing “CTRL”.
*Added the ability to view the changelog from the title screen & pause menu.
*Added “non-slut” dialogue variations for when being abandoned by a companion. (Atlas, Long John, Big Barney, Jasper)
*Added updated 2D sprites for Tiffany, Vanessa, Hitomi, Sydney, Debra & Lara. (Credit to “Screwthename”)
*Added the ability to use the “Adrenaline Shot” item outside of combat.
– This may be adjusted in future versions when there are more ways to restore Endurance(END).
*Adjusted the layout of the pause menu’s GUI elements to make proper use of the space, and added a stat bar for party members’ END stat.
*Adjusted sorting weights of inventory items & skills to categorize them.
– This should make it easier to locate & access useful consumable items of the same type, while keeping “trade-only” items towards the bottom.
– For combat skills, “Submit” will now always be the last listed skill. This should help prevent “accidental submissions” during combat

*Adjusted the amount of supplies given to the player & available to loot in the “Casino – Floor 1” club area to decrease the difficulty of that section.
*Adjusted the opacity of the GUI window’s backgrounds to help improve text readability.

*Added the ability to name your save files before you save.
– The text box limit is 255 characters, but making the name too long will result in it appearing squashed.
– Names are displayed towards the top of the save menu for each save slot.
– This should help players keep track of which save is which from now on.
*Added 50 more save slots. (100 in total)
*Added a couple additional lines during the “Casino – Basement 1” scene (Day 3) to provide clearer exposition.
*Added info to the “Status” submenu about Tiffany’s current proportions starting from Day 3.
– Will expand upon this info in future versions.
*Added the missing “Surrender” option during the Infected Robert fight. (Day 1)
*Removed the unused character parameters: “Infected Attack” & “Infected Defense”.
*Fixed a bug where the Day 2 rooftop ending was causing Day 3 enemies to not trigger combat.
*Fixed a bug where the Day 2 rooftop ending was getting stuck if the player skipped the dialogue too quickly.
*Fixed a soft-lock that would occur if all available grenades were used in combat before clearing the debris on “Casino – Floor 4”. (Day 3)
*Fixed a missing flag that was causing the HP bug to return after losing the fight against Kiana or Andre on Day 2.
*Fixed a bug where Tiffany’s pause menu image was sometimes displaying her old body on Day 3.
*Fixed a bug where a Lara CG was not being removed from the screen after the Rooftop ending for Day 2, when skipping the following story scenes.
*Fixed some typos and other minor bugs.

*Added 4 combat sex scenes featuring Tiffany’s new bodies. One for each remaining enemy that appears in the Casino during Day 3.
– Remade scene for Male Zombie & Sewer Zombie.
– New scene for Female Zombie (Licking/Fisting) & Alpha Zombie (Vaginal).
– Missing original scenes will be re-made and re-added in future versions for Day 3+.
*Added a “Stealth” mechanic featuring 4 “cum extraction” scenes. (Male Zombie, Sewer Zombie, Bestial Zombie, Alpha Zombie)
– Lara will explain how this works to Tiffany at the beginning of Day 3 and give her 1 “Clean Washrag”.
– 1 “Clean Washrag” can be crafted from 4 “Cloth Scraps”.
– A “Dirty Washrag” can be turned into a “Clean Washrag” with 1 “Bottled Water”.
*Added a “Stumble” mini-feature where Tiffany can struggle to get used to her new Day 3+ body.
*Added separate CGs for when Lara throws a grenade.
*Added updated 2D sprites for several more characters and enemies. (Credit to “Screwthename”)
*Adjusted the “Resist” combat option to require an additional Endurance(END) point when Tiffany’s pregnancy is on its 2nd day.
*Adjusted the stats of the Female & Sewer Zombies to require 1 less END point to “Resist”.
*Adjusted the “Guard” combat option to restore an additional END point when Tiffany’s pregnancy is on its 2nd day.
*Adjusted the “9mm Pistol x2” skill so that it no longer costs Tiffany an END point when her pregnancy is on its 2nd day.
*Adjusted Tiffany’s needs so that she gets hungry faster when her pregnancy is on its 2nd day.
*Adjusted the “Abortalite” drug so that it will no longer abort a pregnancy once it reaches its 2nd day. (Unless fetus HP is < 35)
– Characters seeking an abortion at this stage of their pregnancy will need to consult a doctor. (Future version)
*Adjusted the “FertiliMax” & “Unconceivable” drugs to no longer affect pregnant characters.
*Adjusted the order of the “Edit Save Name” option to appear beneath the “Open Save/Load Menu”.
*Adjusted some minor areas within some maps.
*Fixed yet another occurrence of that HP bug that could exist on Day 3.
*Fixed a bug where Lara’s 9mm clip was bottomless and would only empty if Tiffany’s 9mm clip was also empty.
*Fixed a potential bug where Tiffany could continue to fire her 9mm pistol, without reloading, after the clip was empty.
*Fixed some typos and other minor bugs.

[NOTE #1: Remember, you can skip through dialogue by holding “W”. And you can hide the dialogue window with “Ctrl”.]
[NOTE #2: Due to necessary upcoming code changes, v0.10 will require fresh save files. As such, there is no need to keep your saves from v0.09 or previous builds.]
*Added the remaining casino story content.
– 2 story scenes.
– 1 boss fight/sex scene. (Tiffany & Lara vs “The Fister” unique enemy type.)
– These scenes will be extended in v0.10 with additonal images.
*Added a new bonus 2D combat sex scene between Tiffany and a Male Zombie for Day 1-2. Illustrated by @flowerxl.
– 2D scenes can be enabled from the “Toggle Content” Key Item.
– This scene is a test to see how popular this idea is. Please leave feedback.
*Adjusted the layout of some rooms in the Penthouse Suite on “Casino – Floor 5”.
*Fixed a bug where Tiffany & Debra could leave Jebadiah’s Farm after securing Barney, without speaking to Jeb first.
– This was causing Debra’s Quest to not progress properly, eventually causing the player to become stuck in the Pharmacy with her in the party.
*Fixed a bug where Tiffany could drop back down to “Casino – Floor 1” after defeating Andre on Day 2 and replay the initial scene + get free items.
*Fixed a bug where The ‘Ziana’ & ‘Zandre’ sex scenes on Day 3 was being incorrectly recorded as Human sex scenes.
*Fixed some typos and other minor bugs.

We disable comments to the public due to high volume of traffic and spam comments, Commenting is only available for VIP members.
3 2 votes
Total Game Rating
Subscribe
Please login to comment
6 Comments
Newest
Oldest Most Voted
Inline Feedbacks
View all comments

The file that I’m trying to download is no longer available (Android).
I’d like to give this a 0 star

Not available please update the link

Please Update This Games.Waiting for This Update
I’m really Love to Play This Game.