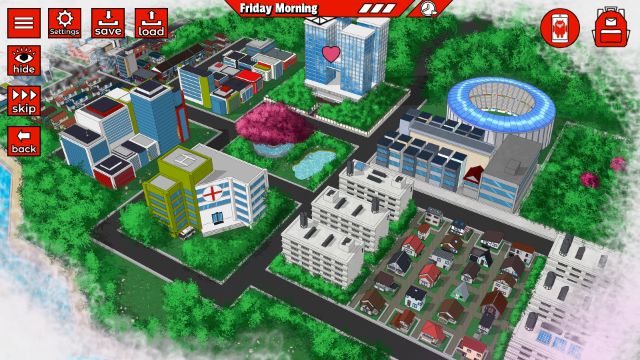 Everyone is used to the fact, that Izuku Midoriya is a typical “true hero” that would do a lot for peaceand safety of others. But what if the story had turned out to be completely different from the very start? In the reality, where there wouldn’t be a hero №1, that gifted him his powers, but a cold, unscrupulous man, that counts on the fact that the main hero can’t simply deny him… What if we had seen a completely different Izuku – not so “ideal” and “pure”, but, at the same time, not a complete bastard that forgot what it means to be a human.​

Fixed (from the last update and the test version of the current one):

Hotfix 0.03 Part 1:
Added:
– Added the ability to move to the map from any point (if the event is not running)
– Added ability to move to mc room from any point (if event is not running)
– Added a box with locations for UA (now you can choose the location you want to get to immediately, rather than having to scroll to it from the start of the location)
– Added box icon with locations in UA
– Added a menu when you lose with further action choices and the ability to roll back to the last checkpoint
– Added display of new messages in the AirChat for each character
– Added an indicator of the possibility to write a message to the character in the AirChat and an animation for it
– Added indicator-counter of new items on inventory icon (which takes a new slot)
– Added animation to the inventory icon when there is a new item
– Added descriptions for two items: Mei’s devices and Heiz’s trackers
– Added a level up indicator for the mc characteristics application on the phone
– Added transitions from corridor 1-A to ALS corridor and vice versa
– Added a description to the grade levels in the UA app
– Added missing art in conversation with Heiz
– Added music in some places

Fixed:
– Accelerated transitions between locations, in the phone, pc, buttons on the map and more, because of which the game feels faster and smoother.
– Fixed bug with battle combat, in which the damage to the character after losing repeatedly increased (this time for sure)
– Fixed bug with text quest, when after passing it and loading saving before the passage, it broke (in past versions, this is fixed by simply restarting the game)
– The checkpoint system has been redesigned and works better
– Fixed a bug in the mc characteristics application, when the confirmation of the level was taken away points, if they still remain
– Fixed some data if starting the game with new content
– Fixed bug with incorrect display of the number of new messages in the AirChat
– Fixed display of item descriptions in inventory
– Fixed a bug in the cameras, where the picture of the SA lobby at night was distorted
– Changed the icon in the battle from skip to rest and the corresponding atl animation
– Fixed the number of Uraraka`s LovePoints in the relationship app (from 8 to 7)
– Fixed a bug with the fact that after winning or losing battles you could open the main game menu
– Fixed a bug with the quick menu animation being triggered for a second after end of battle
– Aligned all the information in the mc characteristics app
– Fixed a bug in the dialog with Uraraka where you could infinitely increase LovePoints to her
– Fixed the manual for the combat system for the current version

Postponed:
– Refinement of the titles, with the current list of all those who support us (critical technical problems, transferred to update 0.03 part 2, so far it is marked “work in progress”)

Changelog v.0.03 Part 1:
– 6 new backgrounds
– 18 new sprites
– 22 new art
– Introducing mc to characters like Iida, Mei, Asui.
– Root development with Midnight (Part 2 of Update 0.03 – root development with Uraraka).
– Cut animations with Uraraka (transferred to part 2 of update 0.03)
– 36 new sounds and music themes
– Added ability to start with new content in main menu
– Added gameplay mechanics for regular and extra classes (now it makes practical sense)
– Added tests as a game mechanic in additional classes
– Added text quest game mechanics
– Added a tutorial for the text quest (in part 2 of update 0.03 will be added for combat)
– Added timer gameplay mechanics (on the moment with camera settings)
– Added chat mechanics with characters (now you can reply to characters in AirChat on the PC)
– Added a phone app with grades (for UA)
– Checkpoint mechanics added
– Added 2 end-of-content marks(2 per game at this time)
– Added the ability to “wait until…” in mc`s bed
– Fixed bug with the fact that on weekdays you can not get in the UA (wrote that the day off)
– Fixed bug with damage in battle – now it does not go beyond certain limits (tested on all platforms)
– Replaced the main mc suit for missions with Heiz
– Refined the system of in-game events to eliminate critical errors
– Added transition for the characters during the dialogues (making them smoother)
– Fixed the bug with the map (now you can click on the thoughts of mc)
– Changed the link-invitation to the discord channel on the phone (previously it was a temporary link)
– Bug fixes from testers(Mikitsuki)
– Other bug fixes

Changelog v.0.029 hotfix 2:
– Event System 2.0(improved flexibility of events, for example, you can’t get into SA on weekends)
– Added the ability to rewind the time of day on the map, not just in the room
– improved the system of display icons for tasks on the map (now they appear only when they correspond to the time of the task)
– Added notifications in the combat system (will prompt why a certain attack or hold is not available)
– Added notifications for PC and phone
– Added icons for tasks in the choice of locations (in the future will help players to understand which task leads to what)
– Added unique phone background in the game for those who have cheat codes (if entered correctly, it will replace the old background)
– Added significant tweets and discord to your phone
– Some small text edits
– Optimized game weight (reduced by another 50mb)
– Backlighting when hovering over the icons in the gallery, in the camera app, backlight legend button in the task app

Changelog v.0.029:
– The plot of the prologue has been changed
– Changed Inko’s model
– Changed Azumi’s model
– Changed Uraraka`s model
– Changed 5 arts in the prologue and added 2 new ones
– Removed 3 animations from Azumi and replaced them with a new one
– Reduced project weight by 150mb
– Added ability to enter the pc in the room
– Chat app in the pc
– Camera app added to the pc
– Added cheats app in the pc
– Cheats to boost stats
– Cell phone added
– Phone app added
– Quests added to the phone app
– App stats added to the phone
– Gallery app added
– Gallery opening cheats
– Added “work in progress” notification
– Credits added
– Credits, instruction on combat system, about and global gallery (will be available in the future) moved to the extra section
– Added system alerts for cheats and in-game events
– Fixed bugs with quests
– Introduced display of quests on the map
– Mistakes in the combat instruction were fixed
– Fixed critical bug with animations(now work faster and without crashing)
– Added sounds to pc applications
– Added more sounds in missions
– Added experience accrual from enemies and ability to pump