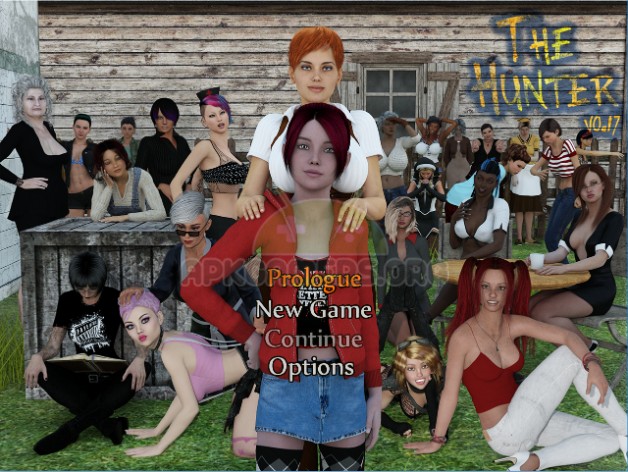 You’re playing as Kaya, a girl living in a women-only village who’ll get to learn how to become a “Hunter”. Basically, she’ll hunt male creatures for women requesting it. The goal is to find them, fight them with a sex-based combat system, train them and deliver them to the requester.

v0.18
Correction:
– Added a tutorial box to make things clearer about how shops works and the fact that talking to girls through desk don’t lead to the same result than talking to them directly.

Art Update:
– From here on, each new update will have a new title screen linked to the content of the update. Said title screen will come with at least one variation (or more depending on the look of the title screen) and they will be randomized everytime you access the title screen menu.

Gameplay Update:
– The prologue has been removed from the game. The Hunter ends up being a bit too light-hearted for such a dark prologue. I’ll implement past story elements here and there to fill the gaps, but some elements will be different.

Gameplay Addition:
– 20 new maps have been added to the game.
– A new passive skill has been added to Kaya. It allows interactive elements to appear when you’re on a case next to them.
– Due to the addition above, the icon apparition has been tweaked to appear above Kaya’s head rather than above the item (it’s also the case for the scanner).

– The UI elements of the title screen have been updated: They are now blue (instead of Orange/Yellow) and feature the same font than the Title.
– Kaya’s house’s front was slightly tweaked to make it a bit more “old-looking” (should be improved in future updates).
– All pics of the game have been shrunk in size (by half) without losing quality.

– All combat values were tweaked. Here are the changes:
– Ennemies deal fix amount of damage per attack. Each attack deals a definite amount of Wild. Damage with a Delta that can range between 5% and 30% depending on the attack.
– Kaya’s skills now deal damages based on stats. Each attack deals a definite amount of Wild. Damage that are modified by two elements: Kaya’s Level & Kaya’s Dexterity.
– Each attack deals damage following that base formula: (Base Wild. Damage x (Kaya’s level + Kaya’s Dexterity))/10.
– Kaya’s dexterity grows with each level. The value will be shown at some point when the whole menu will be reworked.
– With that formula, the fact that Kaya can gain level through experience will have a usefull impact (Skills will deal more damages as she’ll get more levels.)
– Considering how locked in the story it is, the abandonned laboratory fights are NOT following that rule (all skills (Kaya’s and foes’) deal a fix amount of damage.)

– The ennemies that were added in v0.17 (The mutant fly, the chimpanzee and the Swantox) now have a real attack pattern (with some skills activating under certain conditions.)
– The Piss Stream skill was improved: it deals more damage and now has 33% chances of making the foe dizzy (instead of 15% before). The % is also mentionned in the skill’s description.
– A small tutorial message has been added on Kaya’s shelf (it’ll shine until it’s read) to explain the player about the fetish selector feature (explained under).

– A whole new saving screen has been added. It’s the same one than SoV2 with minor tweaks.
– As a consequence, you can now save on 50 different slots! Don’t hesitate to save often!
– The new Fetish Selector has been implemented. Choose which fetishes you want to skip/see thanks to that easy function you’ll find in the game’s menu. If you take an old save, all fetishes will be turned off. You have to activate them manually. If you start a new game, they’ll all be on ON.
– The gallery system has been implemented! You can now rewatch scenes you’ve already seen (provided they’re not replayable, which means Shows, Game Overs and Valera scenes are NOT in the gallery). They have a color based on their rarity or their length/number of pic. It ranges from green (most common/short) to blue, violet and gold (Rarest/Longest).
– The gallery system WORKS in combination with the fetish selector. Not seeing a scene because of the fetish selector will STILL unlock it) and clicking on a scene in the gallery that shouldn’t be seen because of the fetish selector will be skipped too.
– 64 scenes are accessible in the gallery system. All ordered by 1) Girl (when there are several girls, it’s often the one asking for sex that will have their scene under their name (except in a few cases)) 2) Chronology. SCENES FROM v0.18 ARE NOT REWATCHABLE FOR NOW!

Art Update:
– The wolves of the Wolf Queen now have their own sprites
– Svetlana’s pixel version has been corrected (had a black line showing above her head on her horizontal walk animation).

Gameplay Addition:
– 2 new maps have been added to the game.