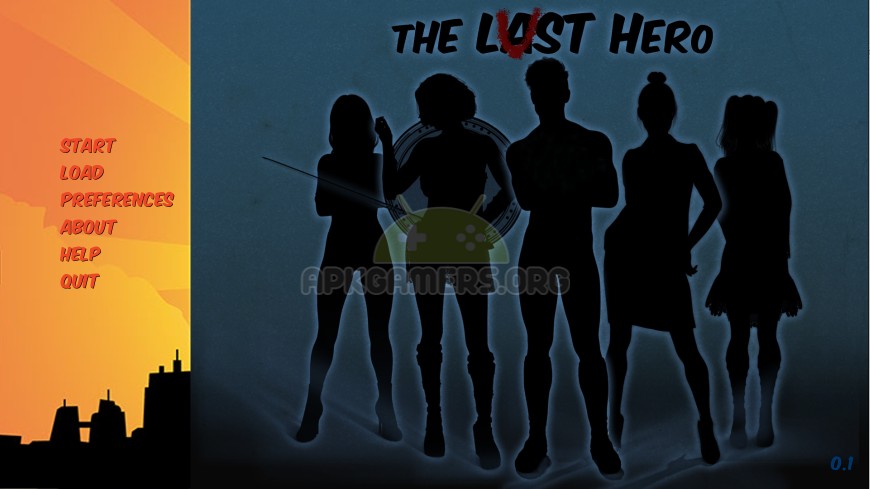 Professor D. Range, the supervillain mastermind, manages to escape from his confinement, the maximum security prison where he was taken after his last defeat.

He is hell-bent on revenge. The Order of Purity, a group of superheroes seeking to eradicate crime and imprison everyone who opposes the current goverment of Righteous City, are his main target. In order to face them, he has to find allies and reform his legendary team of misfits, the Scavengers.

On his journey, the genius but a bit absentminded protagonist has to face lustful and often hilarious events to reach his goal and to discover that nothing is as it seems to be…​

Searching through drawers at the office can now yield 1-3 pen(s).
Fixed the bug where stockings are not recognized correctly for crafting.

v0.5
Gameplay
Straps are now available to buy at the HW store.

New feature: Superhero combat Since the result of the Patreon vote on having a minigame for this or not was a draw, we’ve tried to create a combination of the two options here.
During the battle you can choose between multiple approaches. Certain selections can grant you a star and other visual enhancements (…) You can replay the combat any number of times. Good luck with maxing out the stars and going through the various options.

v0.51
Bugfix
– Bugfix for new games where batteries were not recognized correctly at the crafting screen
– Store inventory fix: Should prevent multiple items popping up in the store
– Pixia encounter: As a consequence of one of the updates for 0.4, in 0.5 some of the players were pushed back to re-create the Hero suit and after that first encounter with Pixia did not trigger. (I have to admit the 0.4 update was a mess)
This should trigger now accordingly.

v0.7
0.7 is a horizontal update. Instead of advancing the main storyline (vertical update) what we’ve focused in this update is to enrich and extend the already existing content.

Gameplay
New location: Avalon bar
New feature: Fetishes Ph level 3 unlocks a character’s fetish. Fetish scenes can be accessed through a new dialogue option.
Note: Fetishes are fully avoidable, so if some of them aren’t your thing you can just skip the content. The first fetish we are going to introduce is Submission, based on the vote on Patreon.
New feature: Transitions If the player fulfills certain prerequisites, various extra scenes can occur when moving from one location to another. In this update two new scenes were added to the office.

v0.72
Patching the Patch (Oh, the joy)
– Fixing the issue which dropped players back to the Main Menu during gameplay.
Selfnote: Improve QA in order avoid these in the future.

Under the hood:
Internet Trolling – Troll conversations are replaced with a generic one liner after a certain number of use.
Fixed the error where the background was incorrect when the hololens first crafted.

v0.9
Originally we wanted to include the first encounter with the Ember Enchantress in this release, but we’ve realized that it would be too much, so we cut it from the current scope. 0.9 is almost entirely a content update. We will keep pushing the 0.10 early release to be ready by the end of this month.

Content
Cherokee – Ph level: 2
Twins – Ph level: 2
Miss Fox – Ph level: 4 Deep Fetish: Ph level 4 unlocks the continuation of the character fetish stories. Note: Fetishes are fully avoidable, so if some of them aren’t your thing you can just skip the content.

Under the hood:
(Special thanks to the66)
The opacity of the dialogue box can be changed now from the Preferences menu.
Hololens view reworked We believe that it will provide a more realistic “glass like” view once it is turned on.

v0.13
Gameplay
Storyline: Shadows of the past – Part I.

Bugfix:
– Fix for the bug which prevented some players to access the Ph level 2 content for Cherokee.

Android:
– Adding a save file description can now turned on/off in the options menu
– Renaming the MC is possible either by clicking his name in the textbox or in the options menu
– 2nd save location added (requires the user to grant the permission to access external storage which is requested at game start. If it’s not granted, the game is shut down.)

Under the hood
– The MC name is now persistent through saves. You can rename the MC anytime in the Preferences menu.
– Bundle function added to the Inventory as a workaround for the glitch which sometimes add ingredients to multiple slots. Now, clicking on the Bundle icon these items will be merged automatically.
– Tease option is no longer removed from the Chat options after a character reaches Ph level 2.

Under the hood:
DLD0 added as an interactable to the Laboratory at home.
Beside the usual chat option, after the Hololens are crafted, a Status report option will be available on interaction with DLD0. This option opens the Status screen where the actual progress with each side-character girls can be tracked.

Bugfix
Fixed the bug which prevented unlocking the PH neons once the Enchantress pushed to PH level 2.

v0.19
Gameplay
New questline: The Artifact of the Ancients
(starts at Cassandra once she is transformed)

Under the hood:
Video feed option added for DLD0.
After the Hololens are crafted, the already unlocked transition scenes can be rewatched in the Video Feed menu.

v0.21
Gameplay
New questline: The secret of the church
(starts at the church by clicking on the double door at the back)

Knight of the Lust Temple v0.2