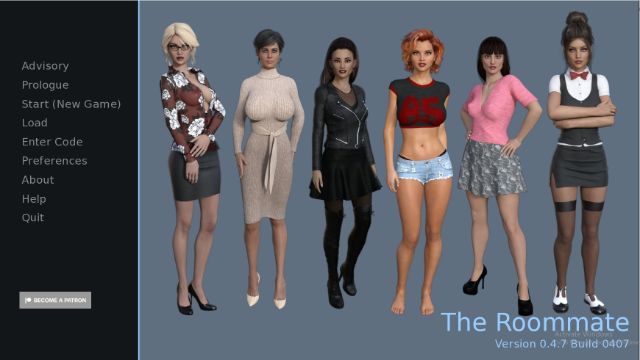 You get a big promotion and move to Seattle where a friend offers you the use of an apartment. However, he’d previously told a young woman from your company that she could stay there, and your arrival means she could end up homeless. But if you don’t mind sharing, you’ll get to know the beautiful and enigmatic Kari. The Roommate is somewhat less “linear” than many other games. There are factors outside a player’s control that may affect the path the story takes.
And you don’t get to shag your mom (or your sisters), but there are plenty of other fish in the sea…​

v0.4
Lois will discourage you from offering Kari or Mallory receptionist jobs. You can ignore her objections, and you’ll be allowed to make the offers if you wish. You won’t get an answer from either until the next release anyway, so make your own call on that.

It occurred to me that they are both fuller-figured, so you also have the option of MC suggesting Lois is jealous. Take it from me that she won’t respond favorably to that, but I guess there must be someone out there that doesn’t care for her…

You also have the option to offer either Kayla or Rei an intern (trainee) postion within the Executive Suite staff.

I’m working on enhancements to the menu system, it’s not ready yet, which is a shame because it would have made life easier when it came to choosing who to offer the receptionist jobs to. As always, there are limits on what can get done in the time available.

Finally, there’s the night of Day 28 (for those of you who do wish to pursue a relationship with Kari). I had some technical issues, so it’s not as complete as I had hoped, but it’s a step in the right direction.

v0.2
While I originally thought this second build would have the second week of gameplay, it soon became obvious that I would need to expand on the mechanics of the base game in order to move forward.
So here it is, with a lot more going on “under the hood” than is seen during play, but there are a considerable number of visible changes that will be apparent.

We disable comments to the public due to high volume of traffic and spam comments, Commenting is only available for VIP members.
3 1 vote
Total Game Rating
Subscribe
Please login to comment
1 Comment
Newest
Oldest Most Voted
Inline Feedbacks
View all comments

I didn’t play but by the description //// if it’s not to have incest don’t put the mother and sister fucking hot!