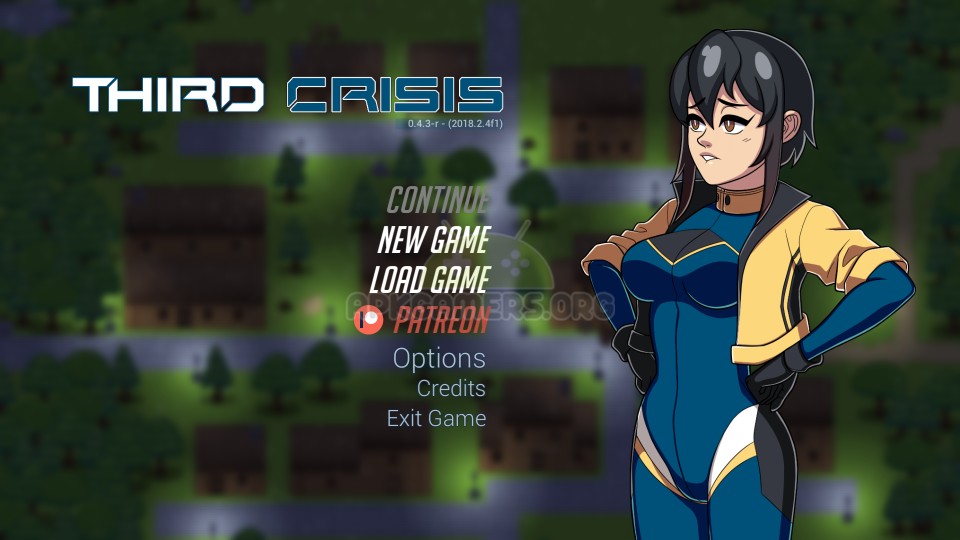 Third Crisis APK Android is an adult tactical-RPG that follows the adventurer and hero known as Vibe. After a mission gone wrong, she’s forced to adjust to her new way of life in the lust-ridden town of Carceburg. Whether she gives in to the bliss of submission or uses her sexual appeal to her advantage on the battlefield is all up to you!

As you delve deeper into Carceburg’s mysteries, you’ll come to uncover the secrets surrounding the crisis that saw humanity defeated and enslaved by the sinister organization Peitho.​

0.42.0
● Added a new animation for Leila training in the Peitho route.
● Added a new animation for Jenna testing a Peitho toy in the Peitho Route.
● Added new Pinup to the Clothing store, made by @KezieDra.
● Added more of a “warning” for the Peitho Route.
● Added a popup to skip going back to the motel to sleep during many side route events.
● Added a button to the Bar Mixing minigame to skip it when Skipmode is enabled.
● Added UI to the shop that lets you know if you’ve already have an item in your inventory.
● Added replacements for old placeholder art. If you find any more, please let us know.
● Fixed Christmas Hat layering.
● Fixed Chokers not being displayed correctly on many outfits.
● Fixed Nipple Piercings not being displayed.
● Fixed a bug that caused Animations not to play when loading a savefile while an animation is playing.
● Fixed the Job Board not displaying properly.
● Fixed Jennas Expression getting stuck.
● Fixed the game crashing when opening the Missions menu while the spanish translation is active.
● Fixed Journal entry being hidden behind a tree.
● Fixed a bug that would prevent the player from exiting the Motel when saving in a precise moment of the Motel intro cutscene.
● Fixed instances of Jennas Eyebrows being duplicated.

Changelog 0.7.6-r
– Added new CG set to the tentacle scene during the VR mission. The new CGs can be
viewed from the gallery if you have already completed the mission.
– Added new CG set to the two shower scenes, these can be viewed by unlocking the
shower or viewing from the gallery.
– Modified load and save menus to better support large amounts of saves.
– Modified the horizon sequence to heal the party after it’s complete.
– Modified Horizon intro dialogue to show Jenna’s character sprite properly.
– Modified combat to give a party character 1HP if they were defeated during the fight, but
the fight was won.
– Modified combat to heal all non-party characters after it’s completed, fixing some
possible edge cases where a character wouldn’t be healed from being defeated and
would need to be in a fight again.
– Modified Throb mission to add autosaves after every night.
– Modified save / load files to display the proper display name of a level instead of the
backend scene ID.
– Fixed issue where having a corrupt save in the save folder would crash the load / save
menus and cause Jenna to appear like a mannequin in the main menu.
– Fixed issue where the visual effects of equipment durability wouldn’t display properly
after loading a save.
– Fixed version checking to properly notify ingame when a patch release is available.
– Fixed issue where visual layers of equipment wouldn’t update properly (like the ‘open
top’ of the Vibrosuit).
– Fixed bug that causes the game to error out on the third prison scene.
– Fixed ability announcements drawing over the victory screen.
– Fixed a dialogue being completely skipped during the motel intro cutscene after waking
up.
– Fixed error spam about animations during the prelewd.
– Fixed problem where the third prison scene doesn’t reset whether it should play after
completing it (causing it to play when entering the prison to bug it or after the patrol
fight).
– Fixed issue where the prelewd CG wasn’t filling the screen properly.
– Fixed issue where combat music would keep playing after completing a fight.
– Fixed issue where camera wouldn’t reattach to Jenna properly in some cases after a
fight.
– Fixed issue where Jewel was halfway stuck into the ground during the cutscene that
plays after winning the first fight in Horizon.
– Fixed ‘A Commanding Presence’ tasks not completing after the corresponding missions
were completed.
– Fixed Throb patrol combat ending as if you lost even when you won.
– Fixed combat UI showing the last selected character on startup even if the character
isn’t part of the current combat.
– Fixed Throb patrol night 2 to properly show the girl on camera during the cutscene.

Changelog 0.8.0
– Added new main story sequence involving the mysterious Peitho commander known as
Wildfire that includes a new h-scene and CG set.
– Added new CG set for Jewel’s foursome in the storehouse.
– Added Waitress Uniform, but it doesn’t have the related bar sequence implemented yet.
– Modified the ability to join in with Jewel in the storehouse for story pacing reasons.
– Modified many levels to improve FPS performance and make loading take half as long
as it used to.
– Fixed multiple issues surrounding the combat UI

v0.13
Content Guide
(Main Story) Sublevel Two
Progress through the main story normally.
New Bar Waitress Scenes
Work in the bar at night until you reach the new scenes.
Replacement CGs
Use the gallery to find and watch the new CGs.
Known Issues
1. Entering a Nudity Zone (like Jenna’s room, or the changing booth in the Gear
Shop), taking your badge off, leaving the Nudity Zone, and trying to exit the
building will cause you to be unable to leave the building until you put the badge
back on.
Workaround: Just put your badge back on to be able to leave the building.
Changelog
– Added ’Sublevel Two’ main story sequence that includes new CGs, new enemies, new
h-scenes, a bad-end, and more story.
– Added new CG set to replace the old Jenna x Karen CG set.
– Added new fully animated CG to the prelewd intro scene.
– Added new CG, dialogues, and character sprites for Jenna’s wet vibrosuit during the
coffee-making sequence in the prologue.
– Added new CG for the daydreaming spit roast that appears during the prologue in the
motel.
– Added another night to the bar waitressing storyline.
– Added lewd pictures to the stronghold in the prologue.
– Added dialogue sprite for Karen.
– Added dialogue sprite for new Florian enemy.
– Added ‘Restless Encouragement’ character ability to Jenna that resets the last used
ability of the target and gives them one energy.
– Added new exterior environment tileset to replace the old one.
– Added ‘Enemy Turn’ UI that shows the character sprite of the currently acting enemy.
– Added character sprites to ability announcements to show which character is using the
ability or effect.
– Added ‘Ultra’ option to grass detail option in menu that makes the vines in sublevel 2
animate if selected, this is an FPS chugger so use at your own discretion.
– Modified the loading screen to have it animate a lot better.
– Modified how the combat UI is displayed to make it flow better with other UI.
– Fixed lighting and collision issues in motel upper floor.
– Fixed multiple issues with how layered images (like characters and CGs) are rendered.
– Fixed townhall moan sfx not playing properly

v0.27.0
Added new bar content that features an interactive gloryhole minigame.
● Added four new pinups with at least two variants each.
● Added replacement CGs for the Wildfire x Jenna scene, and Shower scenes.
● Added a new lewd outfit to the gear store.
● Added the option to give up and continue the story during the escape room sequence.
● Modified the escape room to have more clarity on the left keypad, and made the clues
from the Flogger give more information.
● Fixed softlock issue that would happen if you fail the first dance with Jewel

Journeying in a world of NPCs [Completed]