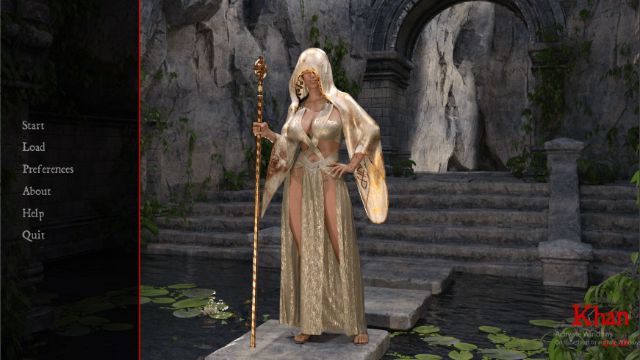 A prince, an escaped prisoner, a usurper, a sexual abuser, a fighter. Karder Dal-Arouya is many things but has one goal in life: to conquer the empire stolen from him by his treacherous queen mother.
Guide Karder on his adventures to reclaim his throne. On his quests you will meet friends and foes, powerful beasts and sexy rulers. Dominate your defeated foes and decide whether you want to use and abuse them for your dark pleasures or convince them to aid you with their skills and knowledge.

Old saves will not work. Vae Victis is a game, not a VN and the infrastructure is always changing. Use VN Mode in the Palace to disable most strategic aspects of the game, quest Skip ‘n Win and Chicken button to quickly recapture your former fiefdoms.

Angilia act 2 conditions:
-Gave birth (20 turns after “she’s pregnant” notification)
-Played the Oryeonguk/Blazeer quest (playing the quest again is highly recommended as content from the quest is mentioned in the act, but you can Skip ‘n Win it)

Nahir act 2 conditions:
-Pregnant (20 turns after being impregnated but did not give birth yet, 40 turns after impregnation)
-You control Marbia
-No need to play the quest again but there are ties between the quest and act 2

Sumia act 2 conditions:
-Gave Birth (20 turns after “she’s pregnant” notification)
-You control Hawatia
-Played the Hawatia/Naniri quest (playing the quest again is highly recommended as content from the quest is mentioned in the act, but you can Skip ‘n Win it)

Once a second act condition is met, you’ll see a red compass on the top left section of the world map. Click it. The acts play little differently if the Wench starts them in the Dungeon or the Palace, except Sumia’s act which starts completely differently.

3.New and original music score in Oryeonguk and Marbia (Tinpingia coming soon). Give it a try!

5.Feature! The Troops counter on the map now shows you total troops and available (non-garrisoned) troops (thanks gojira667 again!)

6.Feature! Toggle Game Features screen, accessible via Settings screen. It holds the VN Mode button (didn’t remove the old one from the hall yet) and another toggle to enable/disable random pregnancy. The latter might be useful for this version where you want to get the Wenches pregnant quickly.

7.Feature! Fetish Toggle screen, accessible via Settings screen. Allows you to completely toggle off some fetishes. If you leave them on they are still optional.

8. New! You can now support me on Pateron although the version distribution will be via Discord only for Patreon users.

v0.4.8
– Added the letters R, P and S in the RPS dial
– Added a missing image of defeated goblin girl
– Improved resolution of one Gaal and Izmi image
– After the Fahda revisit, Marbia will yield 1 more gold

v0.4.7
-A new quest: infiltrate the fiefdom of Hawatia in order to sway a crucial parliament vote which will leave the fiefdom vulnerable to attack. Solve a murder mystery, fuck, bribe, fuck some more, blackmail and fight your way to political dominance.

-A hot new wench: queen Sumia is voluptuous and ebony skinned, arrogant and proud. Persuade her to join your cause or use her body for your dark pleasures.

-Per Subscribers vote: revisit the oasis of Ziruan and offer Fahda the moneylender an offer she can’t refuse (only if you didn’t rape her or Alam or murdered Domia.)

-New! a Chicken button in 1:1 combat to instantly win (Subdue) the melee.

-New! all conquered fiefdoms have the same color, easier to identify which fiefdoms are under your control and which are not yet.

As for content, I’ll start by saying that 0.3 is as big as the two previous releases combined. Second: I want to stress that *your old saves will not work*. Vae Victis is a game, not a VN, and as such the game’s infrastructure changes as it evolves. If you wish, you can use Skip ‘n Win to quickly jump over the miniquests you have completed.

– New! Gallery for replaying scenes you already played. Courtesy of Niv-Mizzet the Firemind. Thanks man!
– New! UI overhaul by the very talented Kia. There’s a lot to love about the new UI but my favorite is the Send Troops slider.
– New! Impregnation flow. When you fuck a (former)ruler wench in your palace or your dungeon there’s a chance she’ll get pregnant. If she does, you will be notified and for for a few turns you’ll be able to have pregnant sex with her. Once she gives birth she will not be available for a few turns as she rests and then she’ll become available again. Impregnation is currently reserved for wenches only.
– New! In 0.2 I made the mistake of hinting that Alam and Domia from the oasis accompany you to your palace, so in 0.3 I owned my mistake: both are available in the palace if you take them with you. I’ll be more careful next time
– The 1:1 RPS combat was streamlined and a very short tutorial is now available after you escape jail. Defensive attacks are considered to be Subdue attacks, so when meeting a new Subdable opponent you can (and should) play a few rounds in Defense mode without ruining the Subdue effort. Furthermore, Subdue attacks cause much more (Subdue) damage but leave you more vulnerable to damage so learn that wench’s attack patterns before subduing her!
– All wenches now have rigid attack patterns instead of an affinity to choose one attack.
– Obedience and Morale were improved. Details below: TL;DR: if you garrison more than 30 troops your Obedience in that fiefdom will go up.
– Originally Fort and Gold Mine multiplied the fiefdom’s Troops and Gold yield but were useless if the Troops/Gold stat of a fiefdom was 0. They now yield a small amount even if the Troops/Gold stat of a fiefdom is 0.
– Cool surprise scene after you conquer all available fiefdoms (Oryeonguk, Marbia and Tinpigia).
– On the left menu you’ll find a tab called Info. There’s a link to the walkthrough there.

Remember that old saves will not work, use Skip ‘n Win to quickly finish miniquests you have played before.

v0.2.7
Morale:
-Morale automatically goes up by 0.3 points until an unmodified cap of 20
-Temple increases the cap by +5 in the fiefdom, original wench in the palace by +3 in the fiefdom, Nahir in the palace by +3 for all fiefdoms
-Attacking a fiefdom drops morale by 20 points on all your fiefdoms (they don’t like to send boys to die) so basically after attacking a fiefdom your economy is crippled for some time as morale slowly goes up again (see #1)

For those of you not sure what Morale does: every turn I roll 1-100 for each fiefdom and compare it to Morale. If it’s lower, the fiefdom Yields gold and/or troops. Higher Morale => higher chance of yield. Using careful placement of Temples and rulers in the palace you can decide what do you wish to recover first, gold or troops.

v0.2
-A new fiefdom to conquer ruled by Nahir dar’Akad. Break her in the dungeon or seduce her in the palace, your choice.
-A miniquest taking place in an oasis where Karder decides to run a heist against a busty rich moneylender, her daughter and her sexy captain of the guard.
-Multiple endings and morale based choices. No karma points, hidden mechanisms, or “bad ends”.
-You choose whether to play a bastard flow or a galant flow (or a mixture of both). Every decision you make takes you towards a successful ending.
-Overall eleven new sex scenes
-New mechanism: Raids! Troops in your Garrisons defend against raids. Lose to raiders and all your buildings in the fiefdoms will be destroyed and Obedience plummet. Repel a raid and Obedience will climb.
-New mechanism: Ravishment. If you subdue a Wench after you beat her army, you may ravish her on the spot. Vae Victis, bitchez.
-Automatic minimap in “dungeon” sections. I am working on adding minimaps to existing “dungeons” as well (Temple of the First Light and Forest of Faith)
-Skip ‘n Win: while previous saves might not be compatible with 0.2, you may choose to skip a miniquest and still gain its benefits. This will help you quickly run the miniquests you played already.

v0.1.20
No new content
-Round numbers for Gold and Troops
-You can rename your character in the beginning of the game. If you don’t he’ll still be Karder (that’s his real name!!!!11)
-Eviette’s name doesn’t show until she tells it. No additional content for her yet.
-Temple of the First Light counter is reset when leaving the temple (can’t become negative). Also: music doesn’t start whenever you are in the first tile of the temple.
-Fixed a bug where opening a fiefdom popup and then clicking a map icon (for example: Citadel) disabled the popup from reappearing when needed.
-Fixed some over the top expressions in renders in the “merchant family” section
-Turns/Hours counters in Forest/Temple now appears as text on the top left part of the screen and is not affected by random clicks
-Having Angilia in the palace will grant you a Morale boost in the fiefdom (automatic for all wenches in the palace) and slightly more gold if automatic (not forced) Yield succeeds: this is Angilia’s “special power”. You will not see these numbers in the fiefdom screen but they are being calculated behind the scenes.
-Faceless raiders might raid your fiefdoms, attacking your garrisoned forces. Keeping a garrison of over 10 troops is almost an auto win against them. If they win they’ll destroy all your buildings and Obedience will drop by 20 due to your weak leadership. If you repel them (again, a garrison of over 10 troops will do) Obedience will rise by 10 because nobody fucks with Karder.

And please don’t upload it on anything else except Mega. My vpn sucks