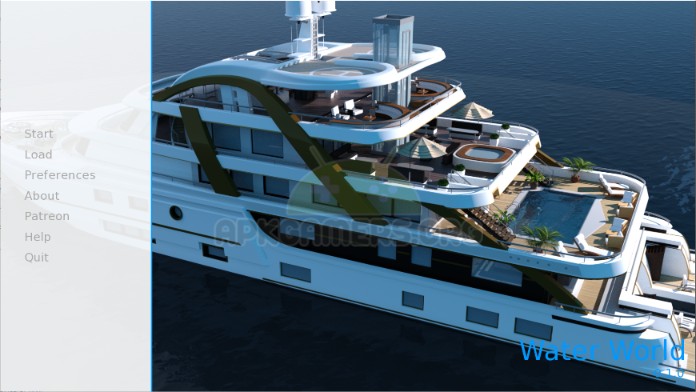 A group of college teen girls is sailing to an underwater research facility along with their teachers when they rescue a helicopter crash survivor named Greg (a.k.a. the player). With no land in sight where they can drop him off, they have no choice but to keep him on board at least until they reach their destination….​

0.4.1 xtra
– Three new quests
– One repeating event with you and Victoria after you finish Victoria’s Transformation quest
– Change in the clothing for Yvette and Victoria after you complete a certain stage in Victoria’s Transformation quest (they are now topless in the pool/hot tub!)
– Enhanced locations UI which shows locations with quests/events
– Over 180 new pictures and 7 new animations

v0.7.0
– finished ‘Encrypted File’ and ‘Julia’s Payback’ quests
– added a minigame (Liar’s Dice) with Victoria and Sophie
– extended the bathroom event with Julia
– wardrobe change for Catherine (both the swimsuit and her usual clothes)
– over 180 new renders
– 9 new animations

v0.9
– added two new full quests
– added the start of a third quest
– added a new character
– added ~ 280 new images with over 260 of them being new screens
– added 5 new animations
– fixed a bug in the minigame where your opponent was making the same bet as yours

v0.9.2
Includes the patch sent earlier that fixes the bug where the Annoying Kayla quest was active when you started a new game and also aligns the periodic events where you teach Julia and get moisturizer from Yvette with the progress you have made in your relationship with Julia and Kayla. A total of 9 new images are added.

v0.11.0
– ~160 new images
– 6 new animations
– a new master location
– finished the ‘Open Marriage’ quest
– extended the Amelia’s repeating event in the cinema with few new sub-scenes
– started working on a new functionality which will allow the MC to chat with the girls

v0.11.3
– fixed a bug with the Open Marriage quest finishing after phase 1 for new players
– added a couple of new repeating events

v0.12.5
– It doesn’t have any new content.
– UI for replaying the scenes. It is accessible through the quest help (the ‘i’ button at the top right). You can now select any quest and re-play the scenes.
Note:
Even if you have finished all the current quests, you’ll see that some of the scenes are locked. Though this is expected for the multi-path quests such as ‘Old Rivalry’, there are additional scenes, which you may or may not have watched while playing, so I had to add additional stuff to track the player’s progress for those. Since your save doesn’t have those flags enabled, these scenes will appear as locked.

v0.12.7
-fixes the bug which caused the game to exit after completing Amelia’s Nights quest

v0.14.0
– one new quest
– 140 new images
– 2 new animations
– 2 new repeatable scenes
The end of this version leads to a black screen saying “To be continued…” because the new master location is not yet done. I’ll do my best to finish it before the end of the month and push it as 0.14.5 (or something) and maybe add a couple of short dialogues, but it all depends on the number of issues I encounter while making it. I’ve had a sort of a dry run making a new master location with the blackout of the ship, so most of the major stuff should be working, but until I start making it, I won’t be able to give you an accurate estimate when I’ll be able to release it.

v0.15.1
– improved the UI of the game (transparent dialogue box, characters flashing when they start to talk, etc.)
– added the two scenes in the Reunited quest as replayable

v0.16
– ~80 new screens
– one new quest added with two replayable scenes
Though this update adds only one quest and 80 new screens, it’s a major story progression revealing who is Amelia’s secret guardian, where Megan is keeping Lana and you and the girls start planning how to free her. It also reveals some cracks in Amelia and Rebecca’s relationship, which you’ll try to exploit in the next quest.

v0.19
– 41 new animations
– 65 new images
– 1 new quest
– changed the hint text for the Old Rivalry quest to guide the new players to lose a game of strip dice so they can progress through the game
– bugfixes
– code preparation for the ability to travel between the ships (coming in 0.20)
This is an early release of just the story part of what was initially planned for 0.19. The events with Mei and the others on the new ship will come at the beginning of January. I just don’t want to risk delaying the story release because of some stuff happening while I’m doing the events. The probability of this to happen is low, but still…

v0.19.5
– 34 new animations
– 28 new images
– 3 new repeatable events (in the bathroom with Rebecca and Mei, in the bedroom with Amelia and Rebecca and at the lower deck with Mei and the young Amelia)

v0.19.9
– 56 new animations
– 57 new images
– 6 new repeatable events (you’ll get access to 4 of them in the game depending on which path you chose in the ‘Naughty Sibling’ quest, the other 2 are available in the cheat menu at the computer in cabin 2-7)
– you can now travel between the ships (talk with Rebecca to take you back to the first ship and radio her from the bridge whenever you want to go back to the second ship)

v0.20.9
– 2 new repeatable events
– 19 new animations
– 9 new images
– fixed a bug where Rebecca wasn’t returning to the pool in the late morning after Yvette goes back to the first ship
– fixed a bug where Emma and Yvette being in the cabin wasn’t being considered as ‘busy’ location

v0.23.0
– 1 new quest (Undercover)
– 32 new animations
– 36 new images (not counting the dialogue sprites for the new girls)
– fixed a bug where some players had Daphnee still coming to ask for her money, but you’ll have to start a new game for the fix to work (big thanks to PostDrip for mapping out the steps to reproduce it)
– added a new ‘props’ system where you can have different items in the rooms which won’t affect the characters logic.

v0.24.5
– 4 new events (one in Sophie’s sex-ed, one in the station’s holo room with Pixie and Lexi and two in the station’s holo room while you’re alone)
– 59 new animations
– 15 new images
– fixed a minor bug
For Sophie’s event you can use the save I shared with 0.23.5
With Pixie and Lexi there are actually two events – one which uses the old animations from the connected quest and one new with them in a classroom. When you start the event, one of them is chosen at random and played, meaning you may need to run the event a few times to see the new one.

v0.25.5
– added three new events (one night visit by Pixie, one event with Pixie and Lexi in the lounge and one event with Iris and the avatar in the holo room, where you can chose if you want to win or lose)
– added one night visit by Lexi using animations from the scene in ‘Under New Management’ quest
– fixed a bug with a missing image of Megan, Pixie and Iris at the machine shop

v1.1
– epilogue for both endings
– 54 new images
– unlocked gallery at the end of the game where you can see scenes from quest paths you’ve skipped

Under the Moonlight v1.0 [Completed]

Would You Like to Run an Idol Cafe? [Completed]