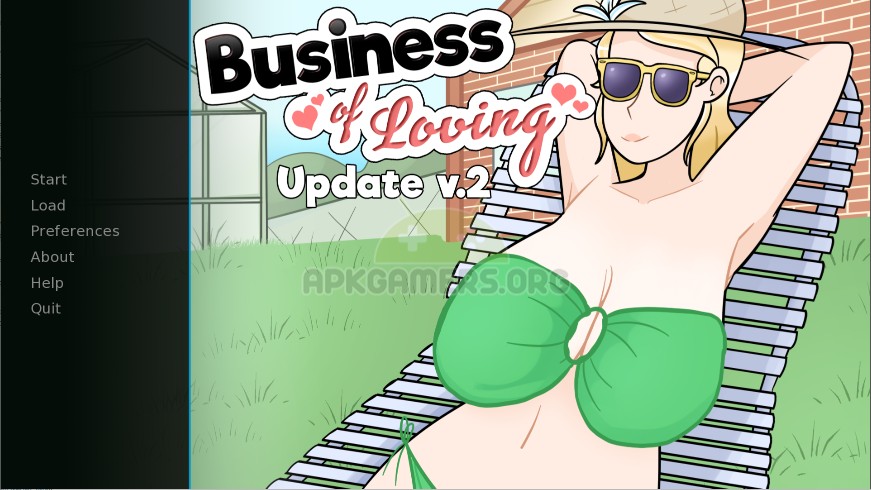 Business of Loving APK Android Port – A NSFW visual novel of love, lust and getting down to business. You play as a young, unpaid intern trying to make it in the biggest company in the city, Business Inc! You’ll not only have to balance your life dealing with your grueling boss Kimberly, you’ll have to balance home life with your single-mother roommate Lorraine as well as find other part time jobs with various other bosses to pay rent on time. Along with that, uncover a scandal of dirty lies and kinky corruption as you slowly make your way to the top of the business empire!​

Lorraine x Lily Route has been made a little more accessible. Reach at least 22 scenes with Lorraine, and complete Lily’s route to access it. Meet Lily in her garden to see how that plays out…

**New Location!**
Added a truck to go to the Farmer’s Market.
Check out the stalls, or talk with Zara after the route is over.

~~~~BUSINESS OF LOVING v0.3.5~~~~~
Hello friends and foes alike. Here’s a little unexpected update..! It’s mostly focusing on cleaning up the UI, the map and some art fixes,
as well as fixing the degradation routes for both Lorraine and Lily, and adding in the poll winner scenes and a brand new animation!
WHAT’S NEW!?
ADDED:
(Vanilla)
– Lorraine Riding Animation <3
– Lily Grind
(Degradation Scenes)
Lorraine:
1. DG Morning Wood
2. DG J/O Peek
3. DG Dressing
4. DG Bathroom Peek
5. Stripping Scene
6. Assfeel
7. Assjob
Lily:
1. Ass Play
2. Cucumber Ass Play
Kim:
Kim gets a small new scene where she makes you address her by a new name..!
As well as a change when you revisit her peeping.
MAP and OVERLAY!
There is now an overlay at all times that allows you to jump to the main map/change the clock, check your RP/DP
and money, and check the number of scenes viewed.
FONTS!?!!
Changed some fonts and all that boring stuff.
Fixed some dinky facial expressions.
Anyways, that’s about it. I hope you enjoy it and thanks for playing!
FIXES:
Reworked Lorraine’s and Lily’s Degradation routes. They’re now permanent,
but you will be given a warning when you reach it! This will effect the main story when it progresses further, but not end it!

0.4.5
What’s New?!
Added the poll winner scenes!
3 New Scenes for the Lorraine Route.
1 new Lily animation set.
Added Kimberly degradation route..!~
7 Degradation scenes in total.
1 Patty scene.
Talk to her in the bathroom, then try again…
Fixes
Fixed the Spankbank to add Ramirez; Lily and Kimberly’s Degrade scenes.
Fixed some of the map to change from day to night properly.
New Cheat code!
Maxes out all RP points for everyone except Ramirez. (Due to coding issues; Will be fixed later on.)

v0.5.5
Business of Loving v5.5 – Three’s A Party!
Lorraine and Lily have been neighbors for so long, but never got the chance to know really know each other. Perhaps a fateful encounter can lead to some fun for the both of them…

As you go increase both Lorraine and Lily’s RP, a new route will be unlocked. Keep visiting Lily’s garden to unlock it!

New Cheat!
Already played it? Skip it with the new cheat! Located in the cheat.txt file.

OPTIMIZATION!
File sizes have been optimized for a much smoother, faster download.

v0.7i
New Location – Wally’s, Home of The Wild Wally Burger!
Fast food for when you’re too lazy to cook.
New Character Charlotte!
Charlotte’s just a goth trying to make her way in the world and survive a miserable minimum wage job. Maybe you two can kick it off.
7 New Scenes with 3 special revisits
This is part 1 of Charlotte’s ~Romantic~ story line, and will be concluded next update, hopefully by the end of January.

New Cheat
Wanna skip to the new stuff?
Enter givemegothgf when starting a new game!
Thanks everyone for your patience and support. Enjoy!

Lorraine x Lily Route has been made a little more accessible. Reach at least 22 scenes with Lorraine, and complete Lily’s route to access it. Meet Lily in her garden to see how that plays out…

**New Location!**
Added a truck to go to the Farmer’s Market.
Check out the stalls, or talk with Zara after the route is over.

The Story Of A Good Girl v1.0 [Completed]