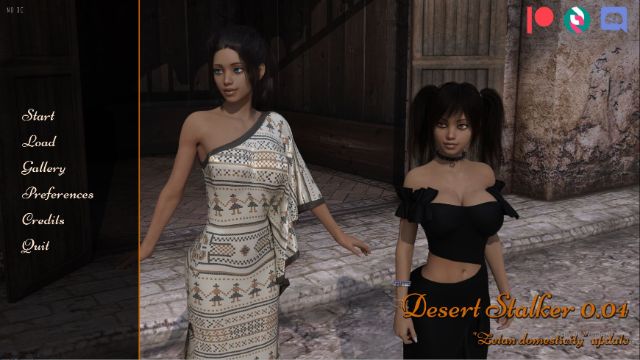 The game takes place in post-apocalyptic Egypt. You will play the role of a Desert Stalker; a free warrior and adventurer who scours the violent remnants of a civilisation scattered through sand dunes and destroyed cities. A family man at heart, you will explore the world around you, find treasures, fight enemies, make friends, forge alliances and have a blast along the way, all to provide for your loved ones who dutifully wait for you at home.​

“Old Saves May Not Work”

Technical changes:
– Converted all images to webp, significantly reducing package size
– Added a “Hide UI” button in Quick menu for android
– Changed flash to be gray instead of white (thanks for pointing it out)

v0.09c
Bugfixes:
– Fixed a missing audio file issue during the oasis event with Shani
– Fixed a crash when visiting the prisoner in the market

Technical changes:
– Added Spanish translation (WIP), courtesy of Darax
– Added version information next to each save

v0.09b
Minor changes / Fixes:
– Removed the ability to feed Fairy until the end of time (players were getting soft-locked under certain conditions)
Note: Progression of Fairy basement events has been reset to account for the fix, and they need to be replayed – Fixed the travel sequence to the Mutants based being repeated

New Content:
– Added 1 new story scene.
– Added 1 new side mission.
– Added 2 new small events.
– You can now sleep with your lovely wife instead of alone if you choose to do so.

Reworks and Revisions:
– Reworked d1a (initial Raiders scene) from the ground up.

Minor changes:
– Slightly changed “Sightseeing with Kateryna” mission’s introduction to flow better.
– Fixed Asani being brought back from the dead under certain conditions.

Minor changes:
– Added an option to change the namebox perspective in Edit Details.
– Hopefully fixed the “None” issue with names that some players encountered

0.06b Changelog:
– Added an in-game menu to change names/relationships
– Relationships are now permanent and should carry over to the gallery
– Fixed Fairy not being unlocked in Gallery if you got her from the trader
– Fixed a missing flag in Fairy’s basement event
– Fixed Ain’s first meet Gallery scene
– Fixed excess notifications for repeated Fairy’s event
– Fixed the credits, no more error log
– Various typos and text corrections

Reworks and Revisions:
– Reworked the intro of the game. Instead of seeing a black screen when starting a new game, the player will get a proper introduction.
– Reworked and improved room visits. You can now lay down and have a chat with Zahra, Ain and Shani about multiple topics (to be expanded as the story goes on).
– Revised d2e (Shani’s tomb scene).
– Revised d1e (Ain Zahra Introduction. Full skin and lighting rework coming in the future).
– Revised the beginning of d1b (Ivy’s introduction).

Minor changes:
– Changed the home menu and world map background music due to copyright concerns.
– Changed some old low quality sounds.
– The gallery will now only show 1 time NSFW scenes. Repeatable free roam scenes will not be shown in the gallery.
– Quality of life updates for multiple HUD elements.
– Removed the repeatable kitchen scene from free roam (for now).

v0.05c
– Various typos and text corrections
– Fixed an error on declining Kyra/Asha due to incorrect variable
– Fangs’ Q&A is now more streamlined
– Fixed a missing flag preventing Kyra from being unlocked in the Gallery under certain conditions
– Fixed the trader interaction leading to opposite responses
– Fixed Emilia not getting offered the second time under certain conditions
– All quests have appropriate ending markers now
– Emilia’s room introduction event has been revised
– Ain’s room becomes unavailable after her punishment, for consistency reasons
– Fixed some renders in Ain’s introduction, that were overflowing the screen
– Added the missing Home Menu tutorial image
– Added Quick Menu option in preferences

v0.04
– 8 new scenes
– You can now visit Ain, Shani and Zahra in their rooms. *1
– added a teaser for car inspection
– multiple text corrections (Thanks to CynicalADM and dsnow!)

*1: Room activities will be expanded over the coming updates

v0.03 Public
– improved text editing in most scenes
– minor bug fixes
– reworked pictures of Shani’s introduction
– a slightly adjusted Ain character model in various scenes
– a few extra panels at the end of Emilia’s introduction
– reduced the main character’s tsar bomb to a fatman in the massage scene
– removed the necessity to click through panels in repeatable NSFW moments

I love this game